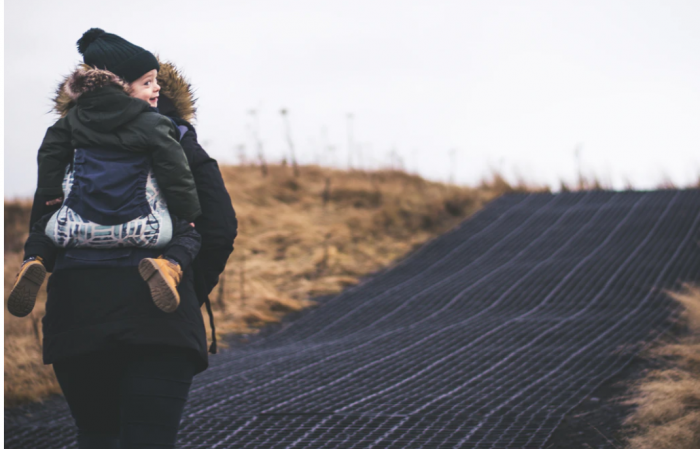 This will hit you right in the feels: Dear Daughter, I’m Sorry you’re so much Like Me.

And if your kiddo is a particularly sensitive soul, this one’s just for you: The World is not Kind to people with Big Emotions.

Nine years ago I became a lone parent in a New York City hospital.

A lone parent has no counterpart, someone to switch off with. We are the one sole guardian. I’ve been asked many times in online dating messages if I have my child “100% of the time.” I don’t think I really need to tell you the answer.

There are upsides to this. For one, my son is a reliable “plus-one” where an adult would typically join in.

When my longtime friend from Toronto scored her first leading role in the opera, I was generously granted backstage access. Not only did my child get to attend the show, but he also went behind the scenes and attended the cast closing party. This is an introduction to opera that will spoil him into eternity.

When I volunteer and get box seats at hockey games, he comes along—and believes that all hockey is watched from box seats. Life will one day give him a rude awakening on that point.

There’s a tight cost-benefit connection to everything that’s made me an extremely productive person with deep, meaningful relationships with friends and clients. I am eternally managing every minute and every dollar.

A few years ago, I honored an exercise that had me choose three areas of my life to spend money—areas that make me feel the most abundant—and I cut everything else. So, I dress well, travel well, nerd out on books and courses, and I feel like a millionaire.

Around the same time, I also completed a time management exercise where I tracked my time-spent for a few weeks. I found that I have almost no wasted time pockets of my day—I get sh*t done better than the average person.

I do lone parenting well. I’ve heard that just five percent of single-parent-owned female businesses survive the five-year mark. I’m not sure what the stats are on lone parent businesses—because there are probably so few of us—but I know I’d be in the top five percent if there were a list.

I am also the grateful recipient of random acts of kindness. When the battery of my brand-new car randomly died and I was left waiting for roadside assistance for three hours, the school principal generously drove my child to me because there were no other, as he called it, “strings to pull.”

I am grateful for these acts, as they are rare. Mind you, 43 people also honked at me without trying to help.

I like my child—he has jagged edges sometimes, but most children do. He has a mentor. We’ve found an important village to make sure he has positive male role models in his life. We volunteer and give back, because I never want him to feel like we are victims or that we have less. We attend countless events, because we live in a city where they are mostly accessible.

That’s the pretty side of it. That’s what everyone sees on Facebook.

The ugly side is that I’m tapped out.

They say it “takes a village,” but finding a village or even trying to create one is hard when it’s just me. I have to pay for or trade for everything.

Some of you think that’s your life too, but I almost assure you that you have someone in your life to pick up a hammer and put a picture up on the wall, and not be paid for it. Someone to make a meal, or occasionally do a school pickup or clean a counter top without trading your time or your money for the “help.”

I have worked with coaches who assure me that the answer is simply focusing and getting my priorities in order because “everybody” has time to do what’s “important and urgent.” Those coaches are also not solo parents.

I liken my life to a Jenga game where pulling one block of time to do a workout can, and sometimes does, mean falling behind on something else—cleaning my apartment, paperwork, fueling up the car. Only it’s not Jenga; it’s me and my child’s life, and the stakes are much higher.

I’m not wasting time on Facebook. I’m hustling to make sure that my child has school lunches and my business has clients. I usually have one or two things I’m fighting to add to the list, mostly workouts or social life basics. One day.

Sometimes my apartment is a mess simply because I am out of energy to clean it. And when I say out of energy, it’s not due to laziness—it’s literally my body shutting down from effort.

Sometimes my body is a mess because I am simply out of energy to feed or exercise it.

I’ve been assured that the solution to this is “self-care.” Every mom knows this. However, my self-care nights are often not worth the effort because my sister lives 20 minutes away, which means if I want to have a bath by myself, it’s an 80-minute round trip to sit in the dark.

It can be heartbreakingly lonely to lone parent. Those fun moments while watching a child learn to ski or skate aren’t that fun by yourself. He still doesn’t know how to swim because taking a little kid to the change room at the pool is like chasing a wet pig around the farmyard. The chasing-a-nude-kid-around can really kill the vibe.

It gets boring when kids are your whole social life. It sucks to only get to watch kid movies. Ever.

And I am so over “mommy, read to me,” because my child’s entire stimulation is either me or an electronic device. I’ve come to despise reading, because the second I have a nano-second of downtime he asks me to read to him. I have thrown books across the room to try to hide them because I just don’t want to do it.

Sometimes I break down. This come in two varieties: screaming fits or panic fits.

The breakdowns are rarely aimed at my child, just the situation. It’s hard—when I’m running such a tight time ship—to have to ask someone to put their socks on 12 times and remain eternally patient and encouraging and kind 365 days a year.

I become an ogre and lose my cool when I need to suggest that someone clothe themselves for 15 straight minutes because there are still so many other things that need to be done.

I struggle to think of myself as part of a “family”—it’s more like a nimble micro-managing of two people.

Some people shame single moms. People mostly ignore solo ones. The other day in the schoolyard, I heard someone exclaiming, “He doesn’t have a jacket on!”

But, you see, I don’t have the time or energy or interest in deciding whether a nine-year-old wants to regulate his own body temperature. So he can hold it if he wants and she can keep being scandalized. I put in my 15 minutes of begging to just get the pants on.

Mostly, people assume we are fine, and we mostly are. But lone parenting is hard in a way that nobody can ever know unless they are living it.

Here’s what lone parents need: A friend. A meal. An offer to drive a child somewhere. A babysitter. A night off.

We are fine, but we are also probably not fine.

I See You, Single Mom & Here’s what you Need to Know. Dear Single Parent: You will Never Be Enough. Mothering, Expectations & Shame.
See relevant Elephant Video