Bernie is Simply Better than the Rest. 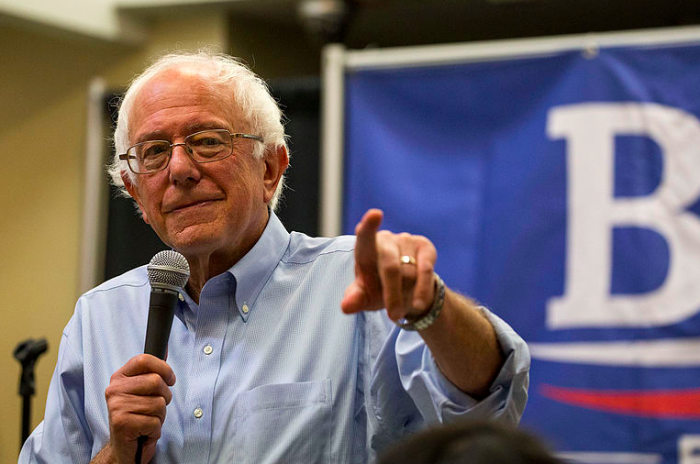 And that is the most important thing to both governing and winning.

Inequality is tearing apart the social fabric while leaving countless millions struggling. Oligarchy is subverting the will of the people and undermining our faith in democracy. Climate change threatens the basis of all life on earth, and with it, every personal and social aim we might dream up.

These are gateway issues, with each being responsible for countless other concerns. If they are not redressed, our society will be broken, our democracy sold off, and civilization disrupted—maybe not today, maybe not tomorrow, but someday, and soon, and for the rest of our lives. This is the reason Bernie has not changed his focus for decades: it has been a long and looming crisis that is finally coming to a head.

They are also systemic issues, which used to rank at the bottom of voter concerns. However, Bernie changed the political calculus by refusing to change the subject. And by winning the argument, he transformed the party. Meanwhile, through focusing attention on the things that mattered most, he gave the party a sense of purpose, making everyone who is a part of it a little bit better.

Warren might have taken on these issues without him, but she has been less consistent over the course of her career and campaign. So, even as she punches through them like a prizefighter, adapting her arguments to the audience and her tenor to the times, it is far from clear her presidency would not drift into the usual mix of social and identity issues that have diverted attention for decades. And even though he knows the right people, to get the right things done, the experience to do it well, and the character to bring us together, it is far from clear that, left to his own devices, Biden would do the right thing.

In an era demanding big structural transformations, all too often he promises merely a return to the incremental improvements of the status quo. And he is dangerously prone to being pulled into the latest retributive justice craze, whether it be another major war or a senseless attack on the underclass dressed up as common sense.

Aside from the oligarch, whose winning strategy consists of buying off Democratic elites and brainwashing the electorate with a blitzkrieg of campaign commercials, each of the front-runners has brought a vital piece to the puzzle of accomplishing these goals. They bring the character and capacities, skills and experience, rhetoric and relationships, that will be needed to see them through. Yet, each of them shares the same tendency to get diverted from the things that matter most. And none of them have exhibited close to the courage needed to take on the special interests blocking so much change as Bernie.

Each would bring to the presidency their own special benefits, but these are mostly about means, while Bernie focuses on ends. A living wage, health care for all, affordable education, accessible political institutions, a stable climate. Accomplishing these goals would fundamentally improve our lives, and we know this because they have been accomplished repeatedly in the most democratic and successful states in human history, which Bernie seeks to model. Denmark is not only a highly prosperous country but is often ranked the happiest in the world. Confusing it with authoritarian states like Venezuela is as ignorant as it is deceptive.

Meanwhile, he does not play political games with personality and wedge issues, and he does not waste time on small-bore legislation. He does not try to deceive us with face-lifts and stir us with fancy words—what you see is what you get. And people tend to like him the more they see him, because they learn that they can take him at his word, which is why every effort to tear him down tends to backfire. And it shows in the polling, where he routinely beats Trump in head-to-head polls by heftier margins than his rivals, and where he performs astonishingly well in the big industrial swing states he will need to win.

Pete Buttigieg is right that the true test of leadership is moral, but it is here where Bernie truly leads the pack. For in redirecting our attention to the things that matter most, he has focused us all on a higher purpose. Instead of bringing us together through a compromise between fascism and progressivism, which would drag us still further to the right, he has simply focused on that which is right. And if the past is any predictor of the future, we can count on him to govern in much the same way, because he is if anything consistent, and he is fastidiously moral.

When he realized that through arming the Saudis, who were blocking its ports, we were starving millions of children in Yemen, he organized Republican and Democratic senators to invoke the War Powers Resolution for the first time in history to end it. When he realized that these arms sales contributed to Saudi and Iranian violence across the Middle East, he took the lead in calling for peace between the two states and their proxies. Instead of catering to the Israel lobby, which backs the Saudis in an effort to isolate Iran, while entrenching a system of racial apartheid at home, which destroys American credibility abroad, he has taken the lead in calling out their bigotry. Time and again, he has stood alone against powerful special interests until others banded behind him; and it is precisely this courage and judgement and integrity that we have been missing in the White House for generations.

Bernie may be rigid, he may be less fluent in bureaucratic minutia, his working-class Jewish accent may sound rough, but he would be the most experienced first-term president in a century and a half, and he is simply better than the rest. He is morally better, which is why he polls better; and he campaigns better, because his decency and integrity are inspiring.

All of this would make him a better president, whose moral guidance would make us a better country, comprised of better and more caring citizens. And what could be better than that?

~ Theo Horesh, author of Convergence: The Globalization of Mind

Please Vote, Even if it’s Not for Bernie. Vote, Damn It. Why Bernie Can Win Bigger Than You Think.
See relevant Elephant Video