Thank You, Slow-Ass Driver, for Teaching Me the Value in Staying Present. 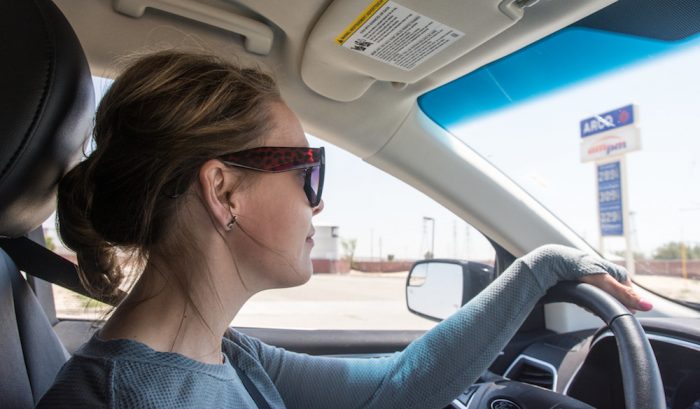 You know a great way to test the growth of your own personal development?

How to see if you are really living in the present? If you are able to let anger just wash right over you, as the Dalai Lama apparently does?

Well, my friends, let me tell you a little story about my most recent Friday night drive home.

You see, I speed. Just a little. Five to seven miles per hour over the posted limit is my own personal speed limit. (This represents my full-on Midwestern way of really “sticking it to the man.”)

As I approached a stoplight-controlled intersection the other day, I was trailing behind a car that was, for some god-awful reason, actually going the posted speed limit. (Suck-up.)

But the good news was that the usual long waiting line at this particular intersection was actually quite short at that moment, and I could see that the light was green.

I thought I had a real shot at making this light, to get home to my family, and start my weekend.

But this stupid, speed-limit-driving car in front of me was in my way. And as time quickly ticked by, it was becoming increasingly apparent that I wasn’t going to make this light. And it was all the other car’s fault because they were driving the stupid speed limit.

And I was right. I didn’t make the light.

But you know who did? The car in front of me, as they sped up at the last minute to make it through.

You have got to be kidding me—in the hardest way possible.

Now, typically, I would have replayed the scenario over and over again in my mind as I sat at that light, reminiscing about how pissed off I got, and how I was a logical driver, and how clearly illogical they were.

I would have then arrived home and shared the pissed off (yet wildly entertaining) story with my husband, and he would have gotten mad at the car too, because he loves me and that’s what a spouse is supposed to do. We get mad at the same things. Together.

I would have held onto it until eventually I’d feel it in my stomach, and in my heart, and it would have become a part of me.

Okay, so what would that possibly accomplish, other than just filling myself and my husband up with negativity? In fact, I’m quite certain the driver ahead of me went right through that intersection without one little thought of the volcano of a woman they left behind them at the intersection.

Seems like a big, giant waste of energy and a creation of bad.

So, how do I do this better?

I also heard an anecdotal story about the Dalai Lama. The person being interviewed was asked if they ever saw the Dalai Lama angry. The response was a definite yes. But it lasted only a few seconds, and a smile and hearty laughter returned to his being.

So, I tried that. I tried putting that moment completely behind me. And let me tell you, it worked.

It felt so good to leave that anger wrapped up in a tight little box in the middle of that intersection. As I drove off, I imagined the anger box just sitting there where I once sat. I almost waved goodbye to it! It felt good to not drag it home with me. I felt lighter. I felt happier.

And it was at that moment that I got it.

Feeling anger doesn’t cause suffering. Holding onto it does.

Ah hah! Bam! Figured that one out!

And then my elation quickly evaporated.

It’s one thing to let go of anger at somebody whom I don’t know and will likely never interact with again. But, what about my spouse? My kids? If I just “let the anger go,” how are they ever going to know that what they did made me mad or hurt me? And that I don’t want them to do that again? I need to get that message across to them, so I can’t just “let it go.”

I need to learn to detach the emotion from my message.

Instead of coming home, seeing a dirty kitchen, getting angry, and raising my voice at daughter, I can wait until I’ve let the anger go, and instead tell her, “Honey, when I come after a long day of work, and you’ve been home all day, I’d like to see that you’ve put all of your lunch dishes away, and that the kitchen is clean. Can you think of a reason why I might want that?”

Instead of coming home, rolling my eyes, and getting all passive-aggressive when he doesn’t acknowledge me, I can say to my husband, “Hey, dear. When I walk in the door, I’d like you to acknowledge me as soon as humanly possible. It makes me feel connected to you, and that’s important to me.”

Granted, it may not be effective in resolving every problem, every time. But, unloading the anger along with the message sure doesn’t either.

A delivery with love and compassion feels a lot better for everybody.

So, to the person who was driving ahead of me that day, whoever you were, thank you.

Passive-Aggressive: Explanation & Cure. Every Day as you Wake, Say these Words from the Dalai Lama. 10 Eckhart Tolle Quotes to Help us through the Winter Blues.
See relevant Elephant Video