This, not “avoiding toxic Homeless folks,” is Empathy. 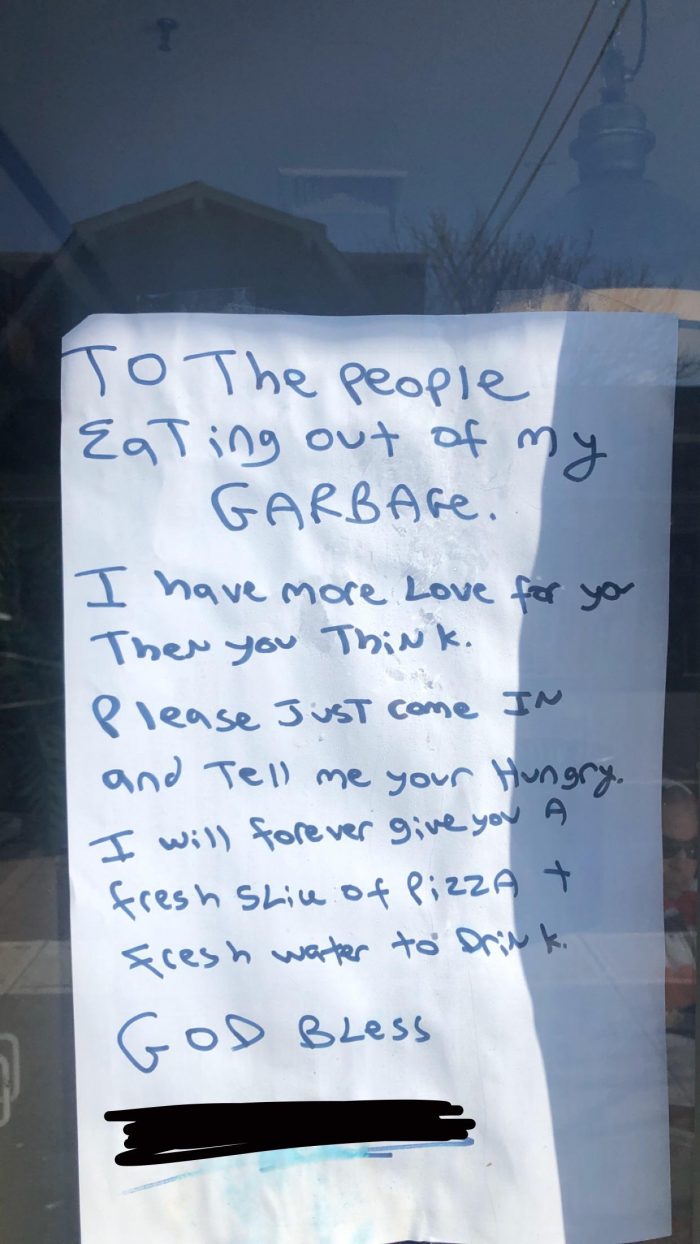 I often write about the difference between Empaths, who often like to avoid dangerous toxic uncontrolled people and situations, and genuine warriorship, which is about Empathy.

“Local pizza place here (Scotty’s) has a thing where you can buy a slice for someone in the future. They have a bulletin board in the shop with free slice coupons attached. You can walk in, grab one, redeem it for a slice. Anyone. No questions asked. It’s always full of free slice coupons.”

“That’s awesome, wish my local pizza did that too :)”

“I’m currently 8.5 months pregnant. I was on a line in McDonald a week ago and this person (who looked homeless) in front of me silently asked the cashier “hey I haven’t had anything in 2 days. Can I have any left over you have? But I can’t pay for it.” The cashier then asked the manager and the manager said no. He went ahead and checked all the trash cans. I bought a couple more food and gave it to him and he broke down crying. I went inside my car and started crying too. I can’t believe I’m bringing a whole human to this nasty nasty world.”

Reply:
“Look, I feel ya. I’m terrified of being a father myself because of what I’ve seen (volunteer EMT since 2011).

All I can tell you is, there are definitely good people around and there has been all throughout our human history. We have clear archeological evidence of humans surviving into old age who could not have survived without assistance from others given their conditions.

I’ve seen people abuse homeless patients (ranging from civilians on the streets to actual officials). I’ve seen the same sort of people go beyond the call of duty.

It just depends on where you happen to find yourself, what institutions are present and how strong they are, what kind of education people have but even putting all that aside, compassion and empathy are still universal features of human life.

It is a nasty nasty world in many ways, but many other ways it’s a beautiful world.

I wouldn’t be here today (quite literally) were it not for the random acts of kindness from complete strangers and other people in my life who owed me nothing and yet went out on a limb for me.

So here’s what I can tell you for sure. You’re bringing a whole human into this world who has a mother who feels empathy and cares about other humans.

I’d say that little whole human is already off to a great start :)”

For a few months, I was a substitute teacher, and one of the places I subbed was an elementary school. At this school is a kid, let’s call him George, who is in the Special Ed program (I believe he has Downs syndrome, but I’m not a doctor.) George spends some of his time in a regular class, and some of the time in Spec Ed, though he’s really not capable of learning anything they can teach in the regular classroom. He’s sweet, but he can’t really put more than three words together at a time. He is absolutely not neuro-typical, and is clearly disabled.

Everywhere he goes in the school, other kids say hi to him. There are several in his class that have decided that they’re his “pals,” and they help him do stuff like put on his jacket, or tie his shoes, or whatever. His favorite movie is Aladdin, so they all chipped in and bought him a plush Genie.

On the playground, he’s always got two or three kids running around after him, making up games they can play together. Last time I was there, he wanted to pretend that Godzilla was at the school, so they spent their recess running from Godzilla.

Nobody is making these kids “take care of the disabled kid” or anything like that. They’ve taken it upon themselves to look after him, for no reason other than they’re sweet kids. They watch out for him in class, they eat lunch with him, and they play with him at recess, and it’s just all too sweet for words.”

“We used to live in a border town, dirt poor, mom and dad plus four kids, there was 6 of us total, in a 26 foot trailer. My parents would often feed Mexican people passing by, people who just crossed the border. I asked my dad why he feed them, when we were just getting by, He said you “never deny anyone food or water” this has been with me ever since.”

“In high school I worked at a pizza shop and the owner told us we had to throw away all left over pizza at the end of the night. He said if we gave it to any homeless people they would keep coming back. Whenever he wasn’t there at closing I would give the pizza away anyway. If he was there, I would make sure the leftover slices were in a separate clean bag on top of the other trash so it was easier for hungry people to find.