Beginnings may be Beautiful, but Endings are Powerful.

In the midst of a breakup, I often forget the beauty of the beginning.
How exciting it is to share space.
How comforting it is to find rhythm around one another.
How awkward it is to give them access to every single part of you;
To wake up with sex hair,
To be vulnerable in the shower,
To f*ck on a balcony in Vegas while making a sex tape,
To share how I feel about Mondays,
Or the reason I can cry on the spot at only the thought of my sister’s funeral.

I used Google Maps to find his house when we first met.
Now I drive past it every time I go to the post office.
We rode our bikes to the Farmers Market almost every Wednesday,
And drank slushies while soaking up the sun.
We laughed uncontrollably while a hundred little children swarmed innocent goats at the rodeo.
Creekside Deli provided our lunch while we watched the sun set behind the Tetons on the Snake River.
He cooked dinner, aware that I’m lactose intolerant,
While I drank the cocktail of his choice that night.
We gazed at the stars in his weeded backyard
While modern folk music played in the background.
Nights were spent venting about our personal work drama,
And ended wrapped in his light green sheets that felt like satin.

He’s the type of person who wakes to an alarm that doesn’t actually ring
And immediately jumps out of bed and into the shower.
While the siren on my phone can hardly allow my eyes to open,
I’d continue pressing snooze until he’d enter the room,
Wrapped with a white towel around his waist,
Handing me a shot of espresso from the mug he handcrafted.
I turned on NPR while admiring the way he slipped into his business attire.
Our goodbyes were never sweet, but casual.

How teenager of me to blubber about his mannerisms to my friends,
Until they rolled their eyes.
I bragged about the sex we had on a random car behind the Knotty Pine one summer night,
The make-out session on Cache at 1 a.m. that had me out of breath,
And how he took me to shoot guns in Gros Venture for our first date,
Something I’d never done before.
After a weekend getaway in Vegas he said,
“I’m happy you’re almost as crazy as I am.”

Then, phone calls went unanswered
With no follow-up messages.
Unknown cars parked in the driveway at 10 o’clock at night.
More nights in a week spent apart than together.
After a few Moscow mules,
I asked if he was sleeping with someone else
And with no hesitation he said,
Yes, unapologetically.

And just like every other night,
We landed in the bedroom to take advantage of each other.
As I was on top of him,
His eyes were closed and he was smiling joyfully,
Though I remember wondering if he was enjoying himself.
I slept through the night locked next to his side,
Holding each other closer than before.

Maybe I stayed because of the way he danced around the kitchen as he cooked,
The way he got excited when he pulled out his pressure cooker,
Or the smile on his face when we found the perfect block of Parmesan cheese at Lucky’s.
Maybe it was because when I spoke he turned his full attention to me,
He listened, gave advice, and asked questions;
And I always felt comfortable to reply.
Or the fact that he read my favorite book to understand me better
And wrapped me in his fuzzy black blanket when I got cold.
Maybe it was because he was attracted to my youth,
And me to his maturity from the 15-year age difference.

In the morning I woke to his alarm.
As he was showering,
I wondered if I could make him coffee out of his kettle,
Pacing back and forth in his hallway,
Nervous to attempt.
I wanted to kiss him passionately goodbye,
Instead I said, “I’m peacing out” and left.
My mind wandered far and my fingers typed heavily and
That afternoon I sent a well-written text message
Professing my feelings and the need to call it off.
And just like every other man I’ve ever met,
There was no fight,
Only an understanding.

Beginnings may be beautiful,
But endings are powerful.
I’ve romanticized them for the amount of work they require,
How, though they are still alive, the grief still has its stages.
I love reading text threads one last time, laughing or crying,
And then deleting every single word that’s ever been said between us.
It makes me feel like we never happened.
My heart beats fast while I scroll to the bottom of their contact and click Delete.
I do so with pride because in that moment I believe I am erasing the rejection I feel.
When it comes back up, usually when I’m lonely at night,
I turn memories that I don’t want to forget into short stories,
Breakups give me reasons to spend an entire afternoon staring at myself in the mirror,
Plucking my eyebrows, doing face masks, and painting my nails
While singing to Lizzo, without feeling conceited.
Until one random afternoon,
You pass by them on Broadway,
And you don’t duck and you don’t stare,
Instead, you are grateful for the memories you shared with
Another person you used to know. 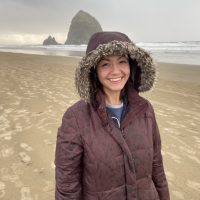 All through elementary and high school, Victoria Munoz would write short stories and poems; it helped her work through emotions she didn’t understand. Since then, she jots d… Read full bio

The Buddhist Way to Cope with a Relationship “Ending.” I Hope he Loves you like This. {Poem}
See relevant Elephant Video