No Justice, No Peace. ~ Kit Shelton 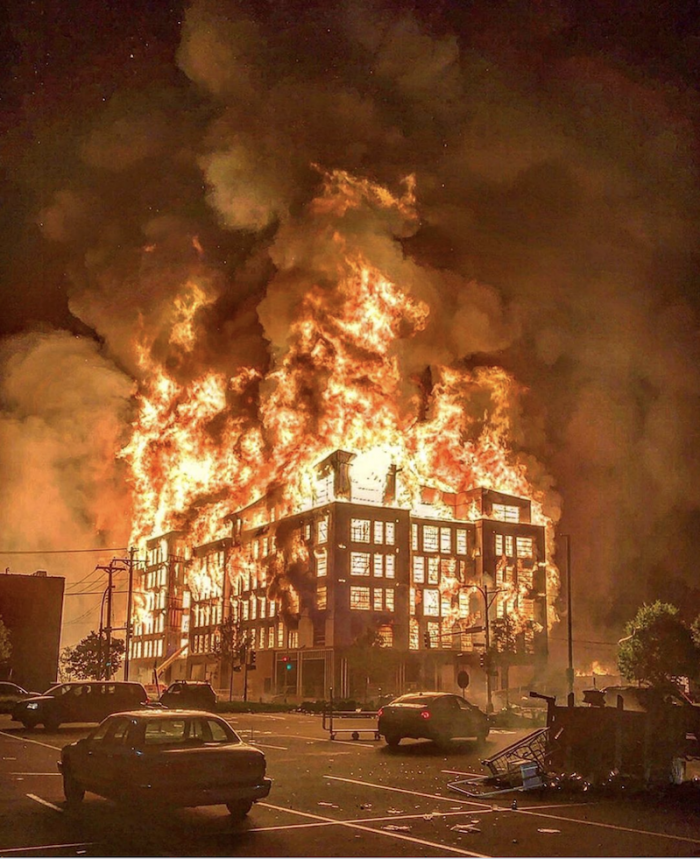 For more on what’s happening in Minneapolis, and why: Who is Derek M. Chauvin?

Well. My city is burning.

My roommate heard gunfire outside her window at 1am. Someone was shot a few blocks from my house on Lake St, potentially by the owner of the pawn store there. The liquor store two blocks away is pretty wrecked. The whole commercial area at Lake & Hiawatha/Minnehaha is a mess, with the Auto Zone there the first building to go up in flames. There’s a list somewhere of the businesses looted and burned along Lake St. It’s long.

I remember this neighborhood before most of these businesses were there. I remember back in the 90s when driving past my house on Lake St going from Uptown towards the river felt shocking, because at some point the whole world shifted. Suddenly everyone was black or hispanic, suddenly there were no pretty storefronts, suddenly everything felt like the part of the movie that has scary music playing.

In 2012 I moved back here from Chicago. I bought a house here in Powderhorn that was so cheap that I pay less for my mortgage than I did in rent. I benefitted from the foreclosure crisis. I came into a neighborhood that I could afford because people who looked like me were afraid of it.

At some point around 4 years ago, Powderhorn was the most rapidly gentrifying neighborhood in the country. Now the people who walk past my house are as likely to be white as not. Now I couldn’t afford to buy a house here. The people who I displaced when they couldn’t afford it anymore? I don’t know where they are. Maybe they were out there last night burning a rat castle. I wouldn’t blame them if they were.

When school was still in session, Milo and I would walk to his bus stop, where he was the only white and non-hispanic kid waiting for the bus to take him to our neighborhood school. Meanwhile, three other white kids would go to other corners of the same intersection and wait for busses to take them to their private and magnet schools. Guess which of those schools is being closed after next year in the city’s “Comprehensive District Design?” The one that’s supposed to help make the district better serve POC and poor neighborhoods? It’s not any of the ones the other white kids are going to.

Guess who’s on the ground, covering the protest at the 3rd precinct, livestreaming with a gas mask and providing witness for the constant stream of cops in full military gear shooting peaceful protestors with rubber bullets and tear gas — it’s Unicorn Riot, who doesn’t get paid by advertisers, who rely on the people for their funding. Throw them some money if you’re hurting and horrified and wanting to help. Communities United Against Police Brutality (CUAPB) is organizing a protest at the MPLS gov’t center downtown today at 5pm. They’re a good org to support too.

People who do not deserve our support:

Mayor Jacob Frey, where have you been? Where were you last night or Tuesday night? Where was your outrage? Why are you saving that for the press cameras? I imagine you’re going to be “SHOCKED AND APPALLED” today. I imagine that the residential developers who paid for your campaign are in your ears today. Who do you serve? Do you serve the people of your city or the people profiting off of their oppression? We are watching. History will judge you based on how you proceed. Will you increase the funding of the MPD even as its racist and violent ways incite violence and destruction of the city they are supposed to protect? Or will you take a stand of integrity and stand up for those who can’t afford to pay for your reelection campaign ads? De-fund the MPD and replace it with a new organization. The Minneapolis Dept. of Peace. That is what we need. We don’t need killer cops. We need to be protected and served. None of this is that. This is power protecting only itself, serving only its own interests.

Madeira Arradondo, where were you last night? Were you witnessing the brutality of the MPD? Where were you? Did you send out anyone to deescalate or address the protestors? Did you tell your force to clear the area? Or did you let them stand there, for hours, taking pot shots at civilians with their hands up, sniping hurt and angry people until someone would break and retaliate? Kids, parents, every single protestor that was shot or maced this week is someone’s grandchild, is my fellow human. Do you think that the rest of the city believes still that the police serve us? We don’t call the cops anymore, many of us, unless we have to. When I had to file a police report when my house was broken into, letting a cop into my house felt as bad as finding it robbed. When a drunk white man threatened my young black muslim neighbors by telling them he’d call the cops, he was threatening their lives. Do you expect to have the court of public opinion on your side? You need to evolve completely if you want to remain relevant. We do not need what you are offering us. We expect better.

So today I imagine a lot of us are going to feel hurt and pain and fear and grief. It’s going to be hard to look around us at the neighborhood we love, at the stores we’ve relied on, and see destruction and rubble and broken glass.

It’s going to be hard. And aside from the man who was shot, it can all be rebuilt.

What we can’t get back is the life of George Floyd.

What we can’t get back are the years of black and brown lives that have been lost to fear.

If we’re white and scared in Powderhorn right now, if we think that it’s our neighbors who are making us feel that way, we’re missing the point. If I’m afraid today, that’s a level playing field.

So be brave, love your neighbor. And fuck the police.

Photo credit @profnighthawk. “Unpopular opinion; Anarchy is a form of protesting. You might not like the form or agree with it, but it clearly got your attention. Please share.
Please credit if used.” @ SMK2, Edit: @profnighthawk

Who is Derek M. Chauvin? 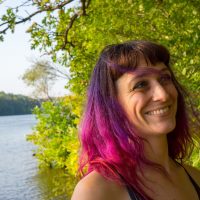 An Open Apology to All African Americans. America, We are Broken. Black Folks, Stress, & How to Improve our Overall Wellness.
See relevant Elephant Video