Put Down the Sh*t you Don’t Need to Carry: The Buddhist Way to Release Suffering.

From my own experience, what I have discovered is that through being curious and kind with our own personal suffering, it is possible to lessen or stop suffering.

The Buddha explained this beautifully with the concept of the two arrows in the Sallatha Sutta (Samyutta Nikaya 36.6). The Buddha uses the simile of being struck twice by two arrows—once by common circumstance and again by our habitual, unskilful reactions to this primary event.

Breaking it down simply, the first arrow is the actual event that happens in our lives. The second arrow is what we make that event to mean.

Often, there is much more suffering from the second arrow. For example, the current crisis that we are experiencing is a lockdown due to the Coronavirus outbreak. The first arrow is that there is now a virus called COVID-19, which has caused many deaths within the country and the world. This is not something that we have absolute control over.

The second arrow is what we make it to mean; it is our reaction to the first event. It could be that the outcome is that there is a loss of freedom that we were once used to. We may have lost someone close to us, or financially we may suffer as we may lose our job and there may be scarcity.

The reaction is rooted in not being able to see things as they are and the consequences of certain unskilful thinking and behaviours. For example, the panic buying mentality was the second arrow launching when the reality was that the supermarkets were still receiving deliveries and providing a continued service to householders.

The second arrow is the arrow we shoot at ourselves. It is possible to see this and stop.

The more we practice mindfulness, we become aware that the second arrow is optional, as we do actually have a choice on whether to launch it or not. Through wisdom and reflection, we can start to see what the second arrow brings, such as anger, despair, depression, and much more. We should see the extra suffering is optional.

This possibility of choice can lead to a happier and content life, which ultimately reduces our suffering.

Within Buddhism, the first teaching was about the four noble truths, and the first noble truth is that there is suffering. As a consequence of living on planet earth, we are subject to causality and natural laws that govern our environment.

For example, things eat things to survive. The fact is that ultimately, we will age, and at one point we will get sick, be separated from our loved ones, and die. This is the universal characteristic of being human. Do you know anyone who has lived to the age of 150 years?

There will be stress and unhappiness, ultimately leading to suffering. However, being human is also the vital condition needed to liberate us from suffering.

For example, we are intelligent beings. We have the rational autonomy to choose between skillful and unskillful behaviours so we don’t have to shoot the second arrow. Other beings, such as animals, only have inborn instincts (e.g., a lion cannot choose to be a vegan; it has to kill other animals to survive).

One can view Buddhism as pessimistic, as the word suffering is something most are averse to. We want things to be happy like in the movies that we watched when we grew up that end in happily ever after.

However, we quickly learn in childhood that life is not like the movies. We experience greed, ignorance, and desire from other children who want to be the best in the neighbourhood. Unfortunately, competition is also the default mode of the materialism-focused societies that we live in.

For those who chose the path to understand the teachings of the Buddha, we know that the rest of the noble truths go beyond suffering to explain the causes of suffering, that there is an end of suffering, and that there is a way out. Importantly, he gives us the cure and medicine for suffering, which is to practice the Eightfold Path.

Mindfulness is a core component of this cure. Therefore, the teachings are more about realism of the human condition than pessimism. Buddha provides a useful framework to apply to our lives, which can increase happiness and ultimately enlightenment.

So how can we apply this knowledge practically to our lives?

The first step is to become aware of when we are launching the second arrow and in what form it takes. For example, there are many times when the second arrow can be launched upon ourselves through lack of self-awareness and self-compassion.

De-centering is the ability to see all events objectively and realistically as an ever-changing process, instead of seeing those things as self, me, and mine. When this happens, we become entangled in the ego-driven personal narrative. You can become an observer to solving a problem as opposed to the person who is the problem. For example, instead of being the self who is identified with anxiety, you see the presence of anxiety as its true nature—then you can start to work on dealing with the process.

There is no doubt that there are forces beyond our control, such as someone passing away or how another person responds to your speech or behaviour. However, if we blame ourselves and take 100 percent responsibility for other people’s feelings, then this can lock us into repetitive old patterns and validate old beliefs that do not serve us.

Just by realising that the first arrow is out of our control can bring forth awareness that can free us from the pain of the second arrow. It is also about letting go of a particular entrenched view that we hold or believe. A common one for many of us is that we are not good enough. The reality is that we are good enough, and each person can make a difference in this world.

“Between the stimulus and the response, there is space. In that space is our power to choose our response. In our response lies our growth and freedom.” ~ Viktor Frankl

To summarise, if we can learn to respond mindfully rather than react automatically, then we can create a space for true intimacy and deep inner freedom with ourselves and others around us.

As Buddha said, we create the world we live in through our thoughts and actions. What will you create for your world?

Be well, be mindful. 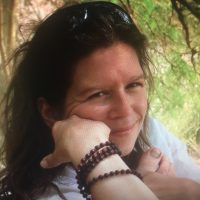