For the People who Aren’t Confronting their Racism or Speaking Out.

This time last week I woke to a Facebook post on the black lives matter protests in Melbourne that I didn’t like, and instantly wrote an article that was accepted to my fave platform.

But then I deliberated over it for the last week, didn’t share it, and have unpacked it ever since.

I’ve felt personally hit every time I saw a post that opposed my view. And I’ve wanted to vomit when I saw posts that tried to oppose why we need to see George Floyd’s death in any other way then a tragedy and a time for change on a global scale—even though it “happened in another country.”

I’ve been looking at my own stuff and what’s stopping me from sharing. Was it more a reaction to prove someone else wrong?

As someone waking up to white privilege and wanting to educate myself and act where I can, we have to start in our own backyard, with ourselves and with some of our fave people and places.

It’s un-comfy to call out, which is why often the loudest, most certain voices in the room are commonly not fully researched or well-rounded, but more one-sided.

But this is what I want to say now.

I want to contribute to an important conversation and create change, not prove that I’m right and you’re wrong. I also feel we’re all more open to that now.

I don’t think the Australian protests could have happened at another time. Never has the loss of a black life caused this much unrest on a global scale in our lifetimes. Yes, people in Australia protested because of an event that happened in the United States, but this has triggered the world to wake up to racism in its own backyard and what it is to be an anti-racist.

Now’s an incredibly important and powerful time in the world’s history to unite on racial justice.

Protesting has always been a critical part of long-term change. The timing’s unfortunate in the midst of COVID-19, but I’m not sure you can really time this kinda stuff when it’s in response to such a tragic, unnecessary, world-changing event. I don’t think the four cops in Minneapolis were too worried about the timing.

I’m not perfect. Far from it. I couldn’t have called myself an anti-racist before, certainly not the best non-racist. But the beauty is we’re allowed to learn and change (“evolve,” even—it’s what we’ve been doing for thousands of years) at any time. Progress and evolution at a collective level often happen on the back of violent events.

Everyone’s journey is different. Some people will come to realisations later than you, some quicker, and some never. Don’t let that stop you from wanting to do better or create positive change.

Racism is bigger than conscious “obvious” hate. It’s more deep-rooted than that.

In the words of Scott Woods, “It’s a complex system of social and political levers and pulleys set up generations ago…whether we know it or like it or not…Yes, racism looks like hate, but hate is just one manifestation. Privilege is another. Access is another. Ignorance is another. Apathy is another.”

We can’t deny that that plays out in Australia. I don’t need to re-quote stats on indigenous deaths at the hands of the justice system versus white deaths. We don’t have to look far to find that and work out that the numbers don’t add up. And we all have a role to play in changing that.

In order to be anti-racist, we have to be able to admit the times we’re being racist. That’s a bit gross and un-comfy to sit with. And often, it’s unconscious stuff.

But we’re all human, and we all have that in us. Which is why I reckon some of the focus on why people are protesting, and even rioting, has been deflected to what they’re doing. That means we don’t have to look within at how our communities, policies, and systems are set up, or step up and take responsibility for our own stuff and our own role in this. Or how it’s taken something overseas to bring more collective focus to this now.

None of us like to admit we’re racist in any way, or that we may benefit from white privilege—I think that’s why we can see people move so quickly to disprove this with a one-off article or a meme or a quote and then feel they’ve proved their point after a few “Well said, mate.”

(That’s not how facts work, by the way. By sharing one article that proves your point. Or a status that gets some likes and nods from people who agree with you.)

When we’re challenged on our personal or political beliefs, whether intentional or inadvertently through something posted, we can often come out swinging. We usually don’t love having our strong personal views challenged. We hold onto them real tight and can come back with all sorts of reasons why “they’re” wrong: “They’re strong left, they’re strong right, they’re young and naïve, they’re old and out of touch, they’re inconsiderate, they’re feral.”

These last two angered me when seeing Facebook friends describing protestors in Melbourne. I think what most of us are realising now is we’re more alike than different. It’s really hard to dismiss or even dislike someone up close. That’s one of the things that keeps racism going—dehumanising people who are different from us. And dehumanising always starts with language.

I’m not going to unfriend people who disagree with me—that just reaffirms the like opinion, and I want to understand other views. Blatant racism and intentional cruelty is a different ball game, but completely dismissing all views different to ours doesn’t seem helpful.

Speaking up is un-comfy. We could polarise people. We can piss people off that we’ve been friends with for years.

But what lots of us are realising now is silence is complicity. And often the voice we need most is the quietest in the room. 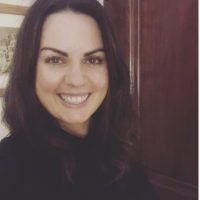 Jacqui Plozza is a Medical Writer, Accredited Practicing Dietitian, and Qualified Health Coach from Melbourne, Australia with over a decade in the healthcare industry. She is … Read full bio

The Killing of Black Men. Being the Change is more than just Protesting in the Streets where the Protests are Understood. Our Silence is our Violence—& I Won’t be Quiet Anymore.
See relevant Elephant Video