Why Men don’t know how to Talk About Sex. {Adult} 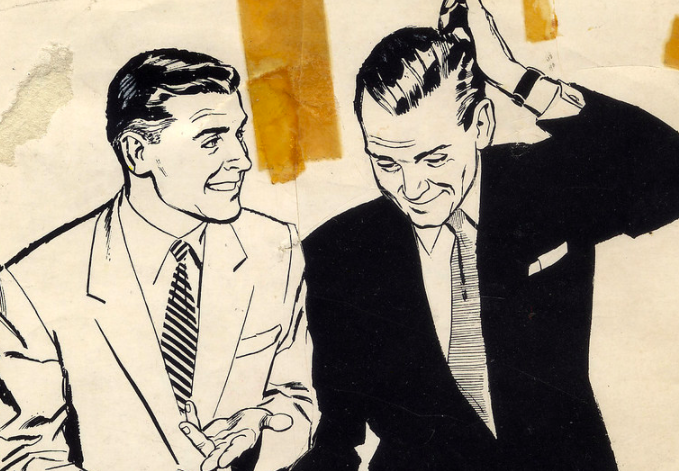 When you’re done reading below, take a peek at this mindful perspective as well: The Real Reason so many Long-term Relationships Fail Sexually.
And if you’re looking for a more in-depth guide to share with your partner, check out: 6 Ways to have Radically Intimate Sex. or The Kind of “Sex Manual” Every Man (& Woman) Should Read.

I am a gossip. Sex is my favorite topic.

If you were giving a blow job then sneezed so hard that all of the sperm came out your nose, I want to hear about it. And I want a huge bowl of popcorn on the side.

When I go out with guy friends, topics of conversation aren’t various: family, money, work, sports, and (lately) kids. Basically, it is boring as hell.

When I go out with my female friends, it is juicy: I know what all their boyfriends’ penises look like, their most recent hookups, what they sounded like, and how much back hair was in play. They show me pictures of their catches and (yes pervs) show me the dick pics from all the randos so we can make fun of them. It’s wonderful.

This has always been the case for me. Growing up, I’d be lumped in with all the guys watching the game at thanksgiving while the women got to sit and talk about how my cousin’s boyfriend vomited all over himself when they’d been fooling around the weekend before. Eventually, I said fuck it, and joined in with the women. This led a lot of people to believe that I was gay. I’m not. I’m also not saying I don’t find men sexually attractive or that I haven’t played in that playground. I’m just saying it isn’t the first section of the menu I flip to.

When the topic of sex talk does come up with men, it is often crude and unpleasant—like a fingerless monkey trying to write poetry. They talk about how nice someone’s ass was, or that they banged—like, super hard so the neighbors complained. It is super basic. What these men don’t realize is that I know what really goes on. I know that some of them cry, some of them want things up their butts, and others have accidentally called out their mother’s names. I know because that’s the fun stuff I get to talk about with women.

When men talk about sex, they tend to talk about it the way they talk about the lawnmower. It doesn’t sound like they’re talking about an experience with another human being, but more like they’re listing the things they noticed about this great piece of equipment they picked up at Home Depot.

…Maybe I’m hanging out with the wrong people.

But, I don’t think so. Sex is meant to be weird and funny and embarrassing. Sometimes the cat starts licking your butt—and sometimes you don’t mind. Sometimes people don’t smell great, and that wildly turns you on and you think, “Oh god, what’s wrong with me?”

If you haven’t had sex at least once in your life where you finished and thought, “Is something wrong with me?” you haven’t been having enough fun in the bedroom. This is the case for many men I’ve known.

A lot of toxic masculinity is tied up in sex. When men sex-gossip, they talk at a distance. They are more concerned with sounding cool than they are with telling an interesting story. To a lot of men, sex is a conquest. They will talk about it, but only so they know that you know that they’ve had it. This is left over from our schoolboy days. I remember in middle school I told some boys I thought I heard my parents having sex and by the end of the day, half the school was saying I was a perv for listening to my parents fuck.

This lack of openness with talking about sex becomes a self-fulfilling prophecy in the bedroom. If all of the older men in a boy’s life only talk about “bangin’ chicks” and not preparing them for the nearly endless potential of the bedroom, men won’t ask for things or try things that they may love. For as many fun, weird stories I hear from women, I hear just as many about men who refuse to do things because it is gross, or dirty, or “weird.”

Men don’t want to admit when they like weird things because to want or do weird things makes you weird. And weird isn’t manly. It isn’t sexy.

So men, please, get fucking weird.

Then come tell me about it.

6 Lies Men tell that are Ruining Sex for Everybody. {Adult} The Truth about Men’s Sexual Desire. The Top 3 Excuses why Men don’t give Oral & How to Get the F Over It. {Adult}
See relevant Elephant Video