Fire & Ice: How we can Transform our Opposition into Love.

Over the past few months, as we all know, there has been a common theme in the world: opposition.

I’ve struggled with negativity most of my life and always thought that standing my ground meant cutting people off or saying what I really wanted to say. And that didn’t come from a place of love.

I had no idea how much our words, thoughts, and actions affected others, so I just cut people off and isolated.

If ever I was in a conflict with someone, I always “had” to drive my point home just like they did; but then a few years ago things shifted.

I had the epiphany that those “cutting off” tactics were harmful. They were a way that I had learned to cope with emotional pain. See, I wasn’t angry or upset with what was coming toward me; I opposed it because it triggered a painful emotion in me that I didn’t know I was responsible for healing.

When we ignore what triggers us—good or bad—we suppress it and it builds. We are masters at hiding our feelings, even from ourselves. These repressed emotions can then get lodged into our energy field and manifest in our physical body as pain, disease, or rage.

When I learned that I was not my feelings, but that my feelings were mechanisms there to protect me when I perceived harm or discomfort, I realized I had been living in a cycle of survival. I was constantly triggered and on the defense, ready to fight.

When I realized that what I oppose opposes me and that I had the power within me to change how events affected me and everyone around me, I went into deep healing. I changed my self-talk; I did inner child healing.

It’s a powerful realization when we identify that we can choose to not be defined by our thoughts or triggers—that we can choose to love what opposes us, or at least surrender and not fight back. This doesn’t mean that we must sit there and endure being treated like a doormat (I went that route; it doesn’t work); it means that we must allow the opposition or negative feelings to flow through us. We must not let them get stuck to us and become us.

In a moment of reflection, I caught myself wondering about a good way to describe two things becoming one—a good way to metaphorically define the balance between not compromising who we are just to get along and acceptance. Then it came to me: fire and ice.

If we heat an ice cube, what happens? Water. Flow!

I had this image come up where I was holding fireballs or a torch and if an iceberg came at me, or a bunch of ice cubes, I didn’t try to resist it, I just let the fire transform the ice into its original form.

In this example, water represents the soul; the ice is the cold, dark exterior (ego). When we don’t feed the ego, but rather shed light or heat in its direction, it has no choice but to dissipate and soften. When we melt our barriers from within, we can come to flow and function just like water. Fluidly. Freely.

Instead of clinging to rigid and cold thinking to help us determine which path we ought to take, we ought to throw fire—light and warmth—down in the middle to blaze a new trail. This path is the trail where we all walk together, seeing “both sides.” This is where we discover we are all on the same side.

The world is capable of this. Each person can burn away anything that is not of our true nature. This is how we become leaders and way-showers. From us, the ripple continues, the light extends, the path becomes more brightly illuminated for all.

I had no idea that Robert Frost once wrote a poem called “Fire and Ice” until after I had this thought, but it also refers to the world. I’ll leave you with that:

Some say the world will end in fire,
Some say in ice.
From what I’ve tasted of desire
I hold with those who favor fire.
But if it had to perish twice,
I think I know enough of hate
To say that for destruction ice
Is also great
And would suffice. 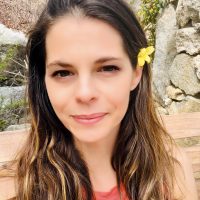 Jennifer Abbott is a free-spirit who has taken the plunge into the journey of spiritual self-mastery! She has spent most of her life being of service to others and have had to… Read full bio

This is Why we Shouldn’t Block our Facebook Friends with Opposing Views. How to Tell if you’re Living from your Ego instead of your Heart.  Real Awakenings are Not Elegant—they are Messy, Ugly, Shattered & Raw.
See relevant Elephant Video