“It’d be Okay if I Died Today:” Why Men Kill Themselves.

“It’d be okay if I died today. At least I wouldn’t have to live like this.”

I hadn’t eaten or showered all day. I wasn’t hungry.

I’d been actively ignoring the texts that rolled in, each buzzing alert nudging my existential dread up just a little bit more.

On paper, I was outperforming all my peers.

I had enough in the bank to comfortably stop working for the next 20 years. I was working for the number one dating coach in the world. I was dating an amazing woman who loved me unconditionally and wanted me to marry her.

In my mind, I was doing what society told me I should do as a man. Be attractive. Confident. Great with women. Successful.

Only one small problem: I wasn’t entirely opposed to killing myself.

Inside, I was empty. My life lacked purpose and direction.

Embarrassingly, I found myself crying while watching “Kung Fu Panda” because it was the story of someone who had found deep fulfillment. Here was someone who had embraced his heritage and culture (something I also struggled with as an Asian American). He had grasped his destiny and refused to let go.

I cried because his life was taking flight while mine felt like it was sputtering out. I was proud of him. Ashamed of myself.

What I didn’t see at the time was that “Kung Fu Panda” is also a story about self-acceptance.

The problem was, I couldn’t see it like that.

Because the very idea of self-acceptance seemed weak, “girly,” and gross.

Loving myself? Leave that for the hippies and women.

I didn’t need to love myself so much as beat myself into submission. There was no room for mercy. Once I finally erased the old fearful me. Once I tore my weakness out by the roots—then I’d be a real man.

I followed that path for 10 years.

I only wore button-ups and sleek, fashionable shoes. I took improv classes and memorized one-liners. I covered myself with tattoos, learned to ride a motorcycle, and trained in every combat sport I could get my mitts on. I studied relentlessly about G-spots, arousal, and multiple orgasms to be better in bed. I did everything the hard way because it would “toughen me up faster.”

The fact is, I was doing everything I could to erase who I was, and trade that in for who I thought I needed to be.

Which led me here.

To a nearly empty one-bedroom apartment on the outskirts of Austin.

The problem with manliness is that it usually comes paired with a sense of stoicism. We learn to set our emotions aside at an early age. “Boys don’t cry.” “Man up.” Et cetera.

I prided myself on my stone face and regularly cracked jokes about ovaries being the seat of all emotion. F*ck emotions. I had logic. And this approach worked just fine. I got by. I was successful.

But what I didn’t realize back then is that all those things I wanted were based on emotions. And when you’ve spent your entire life cutting those emotions off at the roots…well, those kinds of things become next to impossible.

I hated when people celebrated my birthday, felt deeply uncomfortable when people acknowledged me, and literally refused to celebrate my wins because “I wasn’t done yet.” In my mind, I’d celebrate when I’d fully won.

Just one problem. There was always more work to do. The finish line moved daily. There was never time to celebrate because I didn’t allow myself that luxury.

What I can see clearly now is how I resisted any and all situations where I had to feel things—emotions made me feel weak and exposed, and ashamed for feeling weak and exposed.

But that’s sometimes the Catch-22 of being manly. At the end of the day, emotions are what give meaning and purpose to life. A life without them is empty, cold, logical—and who wants to live like that?

I want to wake up to a beautiful woman whispering loving, sexy things in my ear. I want to be moved and inspired by the people I get to help. I want to feel powerful, to grieve what I’ve lost, to walk through a storm with a cloak billowing in the wind.

But it’s not the actions that make these things meaningful—it’s what I get to feel that makes it worth it. Without them, why even bother?

Why win a gold medal if all I feel afterward is bored indifference? Why earn seven figures a year if, at the end of it all, I still have to feel stressed out, not good enough, and alone?

I don’t think it’s an accident that we’re 3.5 times more likely to die from suicide than women. The very nature of how we tell ourselves we should behave as men makes suicide an appealing option, sooner or later.

When I live a life without any feeling or passion, what I’m left with is cold, hard, and empty. And if that’s the best life has to offer, I’d rather die.

It doesn’t have to go that way either.

But that starts with changing how we see masculinity.

It’s okay to be kind to yourself. It’s okay to feel things. It’s okay to talk about that. The minute we give ourselves permission for that? That’s when the meaning and purpose come flooding back in.

It’s easier than you think. And maybe that’s the point. 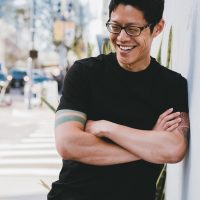 Suicide doesn’t Discriminate: 6 Warning Signs that could Save someone you Love. To My Suicidal Self, What I Know Now.
See relevant Elephant Video