Finding the Magic in Grief (& Lightning Bugs) after my Mother’s Death. 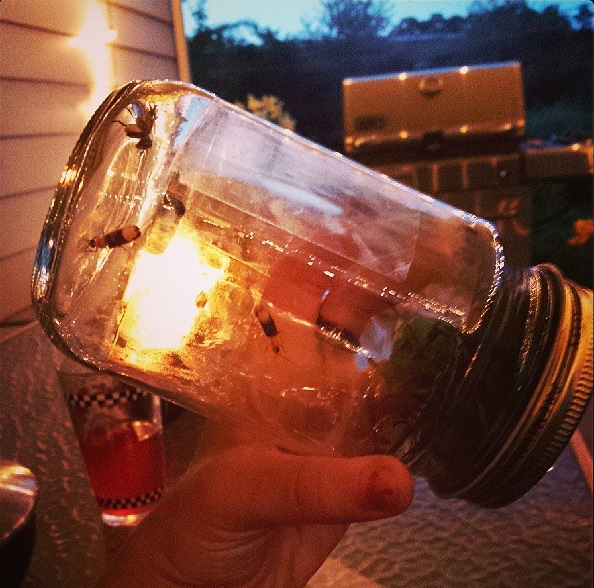 I had forgotten how much I love lightning bugs.

One night, I was relaxing on the back porch in the home I grew up in. I hadn’t spent an extended amount of time there in years, but my mother’s recent death had brought my siblings and me back home.

On this drizzly night I was sitting out there with Charlie, our family dog. He looked up at me from the floor in a way that asked me to pick him up so he could sit next to me on the futon. I had been alternating between mindlessly looking at my phone and watching the lightning bugs light up in the woods behind our house. Something I hadn’t done since I was a kid.

The drizzle turned into a steady rainfall, my phone died, and I looked at Charlie. He glanced back at me and then off into the distance, as if he was also appreciating the silence and the sound. I reached out to lay my hand on him and noticed some crust around his eye, so I held his face and picked it off.

I asked him if that’s what she used to do—knowing the answer, because I’d watched her do it so many times. I had always thought it was gross, but in this moment I was proud to step into her role.

He sighed and laid his head down, as if he was sharing the memory with me. All of a sudden, my appreciation of the rain became hers. The string lights I had finally gotten to work again instantly became more relevant, because they were so delicately placed by her. Through her eyes, and with her spirit, I looked around at all the little decorations she had picked out and lovingly placed around the porch.

This kind of feeling—the feeling of actually being her, of sharing her emotions—had been happening often since I’d been back at her house.

I stood up and turned off the overhead lights to get a better look at the lightning bug show. I was taken back to my childhood, when I fell in love with these bugs. I would try to catch them, thrilled at the challenge of guessing where they would be when they lit up again after becoming invisible, like a visual game of Marco-Polo.

I would win the game by capturing them, but I always treated them with care. I made sure they had food and water, and would eventually let them go. Once I accidentally squished one between my hands while trying to catch it; I had miscalculated where it would be in space. I was shocked, horrified, and devastated. At the time I quickly pushed the incident out of my mind and pretended like it didn’t happen. But apparently, I remember it to this day.

How magical is it to have a lightning bug show in your backyard as a kid? I felt a familiar guilt creep in. One I’ve been wrestling with more and more. It stems from realizing my lack of appreciation for this place she chose for us to grow up. From never hiding my strong desire to go somewhere else, as if this place was not good enough for me.

I’m not sure I’ve really seen these bugs in over 15 years. But now I remember—they are hands down my favorite bug. They are a part of me, a part of her, a part of my memory of her.

As I looked out at the spontaneous little lights continuously flashing here, then over there, I zoomed out my perspective and watched them all sparkle at once in the backdrop of darkness. I was then overcome with a feeling that made me wish and hope that somehow, in the totality of all the lights from those little bugs, that she could be seeing me and feeling what I’m feeling. That they could be the vehicle through which she could be with me now, and know.

But as I watched them, contemplating the possibility that her consciousness could be witnessing this, I realized that I didn’t believe it. My rational mind told me she wasn’t there. She didn’t hear or feel my too-late appreciation of what she worked so hard to give me and watched me dismiss.

Then, something suddenly washed over me again. I felt her envelop me—like I embodied her.

In my own tears, and with my memory of her tears, I felt one with her emotions. Like they morphed into me and amplified what I was already feeling. I began to understand that what I believe with my rational mind doesn’t matter. What I feel matters. Because belief is a construct of the mind. There is an emotional energetic body that we can’t see—a body that maybe, just maybe, lingers in space and time longer than the physical one.

We are not just our genes or tissues. We are human beings. Just like how you can watch an individual lightning bug light up and disappear, you can also witness the magic that appears when you zoom out and view the entire sparkly backdrop as one.

The whole is greater than the sum of its parts. We are the sparkly backdrop of lightning bugs.

I think that when I saw the totality of all their lights together, it reminded my own emotional energetic body of this truth. For reasons beyond what my logical mind understood at the time, seeing the lights as one unit created a spontaneously inspired feeling that in that same way—in the same way these lights sparkled together as one—she could feel me, and I could feel her. 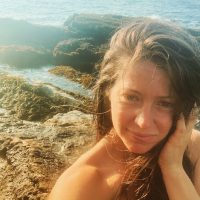 How to Survive the Loss of Someone we Can’t Live Without. Life after Death: I came Back to Tell you This.
See relevant Elephant Video