Love is Essential: Traveling as a Binational Couple with a Dog in 2020. 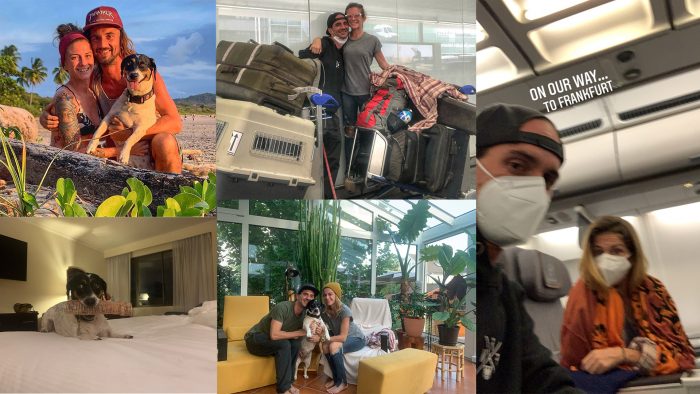 The last five months had been really challenging.

We were stuck in Costa Rica, with airports being closed and no hope to leave the country.

It could be worse than being stranded in a tropical paradise, but hearing about hospitals reaching their maximum capacity and the spike of new COVID cases made it difficult to enjoy ourselves.

In early March, I was offered to take a rescue flight to my home country Germany, but it was clear that my family wasn’t allowed to travel with me.

My beloved partner holds an American passport, and dogs were not welcome on these flights. I decided to sit it out with them—leaving my future family behind was not an option at any time.

As a yoga teacher, I was unemployed from one day to the other, which made things even more complicated. We got frustrated about being stuck in our apartment during a heatwave with no air conditioning. The beach was closed for almost two months, and after that only open for a few hours each day.

On top of that, we were scared that the virus would tear apart our plans for the future. Where would we go next? I wasn’t allowed to go to the United States and my girlfriend wasn’t eligible to enter Europe. It was clear that we couldn’t stay in Costa Rica forever without any work.

The situation was out of our hands; we felt powerless and desperate. We started fighting with each other as we were both scared about what was to come.

In July, it was announced that there would be commercial flights from Costa Rica to Germany again. I would be able to travel with our dog, but what about my beloved girlfriend?

I was searching the internet for every possible way to enable her to come with us. All of a sudden there was hope!

Politicians in Europe saw the outrage on social media created by unmarried couples who were affected by strict travel regulations. They started a petition called #loveisessential.

It demanded that couples like us should be able to enter Europe without being married. That was our chance. We had to get an official document proving that we shared an apartment abroad for a year.

With the help of our amazing Costa Rican landlord, we managed to get these papers and even went a step further than that by becoming a civil partnership under local laws.

After that everything moved forward in warp speed. We got the dog’s papers for the flight, sold all our personal belongings, and planned out our trip to the airport. Clearing our household after four years was quite challenging to do in this short period of time.

At that point, we hadn’t left our apartment much for five months, and honestly, we were scared of the journey ahead of us. We were worried about our dog traveling in cargo, and us getting close to far too many people during the trip, but there was no way back. It had to be done.

On Tuesday morning, we took a shuttle to the airport hotel. Doing the six-hour drive and the flight back-to-back would have been too stressful for Snoopy, so we split the journey into two parts. After a smooth drive, we arrived at the hotel in the afternoon. Time to rest.

It was the first time we had to wear a face mask for multiple hours, but it was fine. The main part of our journey was still ahead of us, and we were nervous if all our paperwork would get accepted at the airport.

At least our dog enjoyed sleeping in a king-size bed the night before the flight.

After an extensive morning walk, we packed our things and got ready for our biggest adventure yet. It was surreal to arrive at an empty airport, knowing that our flight was the only one for the day. Therefore, the staff had all the time in the world to check everything. Checking in took us about 30 minutes at the counter, but eventually, everything worked out.

We were allowed to leave the airport for a little walk before Snoopy had to be put into her kennel. Both of us were worried about our furry friend being stuck in a box for about 16 hours. To our surprise, Snoopy took it pretty cool and went into the kennel with no resistance.

She didn’t even bark or cry, but we could see the desperation in her eyes when she got carried away by the airport staff. She trusted us, as always.

Step one was accomplished: we all made it into the plane and were ready to go. Just before the plane took off, there was a medical incident with one passenger having to leave the plane at the last moment. Needless to say, this got us a little nervous.

The flight itself went smoothly. I wasn’t able to sleep as I was worried about Snoopy the whole time. My girlfriend did much better on that count and slept during the whole flight. I was thankful to watch her sleep after everything we had been through in the last months. She trusted me, as always.

Before the landing, I could feel the tension rising—we were about to face the German border officials with our request to enter the country. In my head, I was practicing what to tell them and prayed to the lords that they would believe us.

What if they would send my girlfriend back; what if something was wrong with Snoopy’s papers?

I was sweating and shaking when we approached the immigration official at the airport. He checked our documents, smiled at us, and gave us the most important stamp ever. We were allowed to enter my home country together. After five months of blood, sweat, and tears, we finally made it!

Now, we just had to pick up Snoopy and go to our new home. It went pretty quick, but the 15-minute wait till she was brought out felt like an eternity. We were both crying out of joy hearing her tail wag in the kennel. She was alive! The officer told me that I was allowed to open the box immediately.

Snoopy was barking and crying out of joy.

It was one of the most beautiful moments in my life—all three of us made it home!

Before leaving the airport we had to take a COVID test, which was well-organised. They registered us, gave us a QR-Code, and 10 minutes later we got tested for free. We were told to go home and quarantine until we got the results.

After a short cab ride, we finally arrived home and were able to take off our face masks after wearing them for 16 straight hours. Once we sat down, we were both crying again—it was almost too good to be true. We made it!

I felt like the luckiest man on earth. Against all odds, we traveled around the world as an unmarried binational couple with a dog during a pandemic. We overcame the struggles of being locked down in a foreign country for months and left all the fights and frustrating moments behind us.

It was the biggest challenge for our relationship and we mastered it together. I am proud of our little family making it to our new home.

I am more than thankful for my partner and our dog trusting me to organize this.

The last months had been the most challenging time in my life, but it was worth every second of it. Good things don’t come easy, and bringing everyone home was the hardest task I ever completed.

Thanks to all friends and family supporting our journey with lovely messages, thanks to German politicians making this possible, thanks to Lufthansa for transporting our dog, and thanks to the COVID test center at the airport. I am grateful.

We got our results the next day and were allowed to take Snoopy for a walk in the forest. It was the best walk ever.

I never cried as much as I did the last days. The most joyful tears of my life.

We are a family, and we earned that status with hard work.

Thank you, Casey and Snoopy. I love you both!

This is what a Relationship with “The One” should Look Like. 8 Ways to Heal a Broken Heart—Even when it Feels Impossible. I Want to Be all of Your Lasts.
See relevant Elephant Video