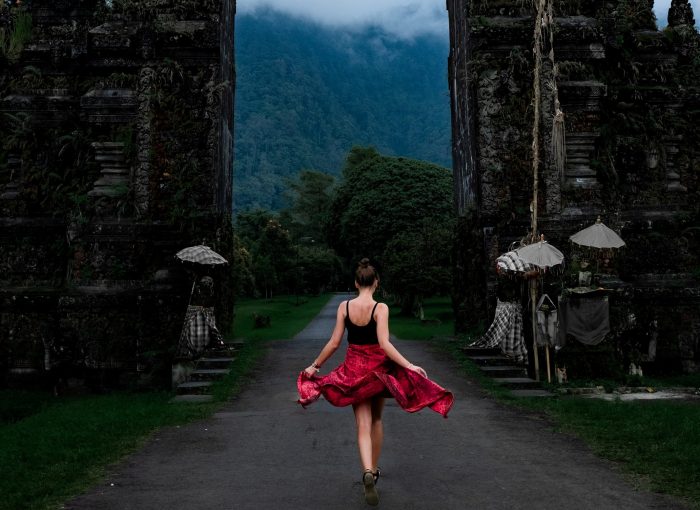 I have spent a huge proportion of this year physically in a state of lockdown, yet I have also found an internal freedom.

While I was being told not to leave my house, I was reintroduced to the concept of free time. I’d been pushed into a “more thinking, less doing” position—a foreign concept for someone who, quite often, already does a lot of overthinking, and not always to my advantage.

And while chaos ensued outside of my little bubble, the safety and consistency of my new (monotonous) routine fueled a requirement for self-dependency that, at the time, was terrifying.

Just me, two kids, and these four walls against a backdrop of fear, uncertainty, and the threat of a long, drawn-out period of self-isolation—the promise of a deep-set loneliness lingered. The dark first days of the pandemic were thick with panic. I felt abandoned and like the walls were caving in. The stillness was a void I wanted to fill. The silence was deafening.

As I found myself released from the need to make my face up every day and absolved from commitments I had made and trips I had planned, suddenly being separated from any certainty gave me scope to consider more possibility.

Lockdown has been somewhat cathartic for me. It has made me appreciate more and realise that FOMO is a disease for the uninspired.

I am reminded of a passage from one of my favorite books, Eat, Pray Love by Elizabeth Gilbert.

“A friend took me to the most amazing place the other day. It’s called the Augusteum. Octavian Augustus built it to house his remains. When the barbarians came they trashed it a long with everything else. The great Augustus, Rome’s first true great emperor. How could he have imagined that Rome, the whole world as far as he was concerned, would be in ruins. It’s one of the quietest, loneliest places in Rome. The city has grown up around it over the centuries. It feels like a precious wound, a heartbreak you won’t let go of because it hurts too good. We all want things to stay the same. Settle for living in misery because we’re afraid of change, of things crumbling to ruins. Then I looked at around to this place, at the chaos it has endured—the way it has been adapted, burned, pillaged and found a way to build itself back up again. And I was reassured, maybe my life hasn’t been so chaotic, it’s just the world that is, and the real trap is getting attached to any of it. Ruin is a gift. Ruin is the road to transformation.”

The COVID-19 pandemic, like the barbarians in the story, came and ravished life as we know it—yet in its wake, it became transformational. It has made me (and many others) realise what’s real and what’s not. What I was attached to that didn’t serve me, and what I couldn’t live without. It made me consider and identify the negative feelings I was holding onto highlighting the people that mattered deeply and the ones that never did.

In the absence of a schedule, we can define a new normal. We can rebuild, renew, and redefine our reality.

While I enjoy regular social interactions outwardly, inwardly there has always been an introvert who wants to stay home. Sit and do sweet nothing. I have indulged her for five months, and now, she rules the roost. This introvert wants to read books, decorate, and make things smell great and sparkly clean. This introvert wants to take long, uninterrupted walks, for no reason other than to be amongst nature. She wants to listen to music again, whole albums, over and over. She lets go of anger much easier, accepts the things she cannot control, is a better mother, and is a better friend.

Perhaps this is not even an introverted part of me, maybe this is my deeper self, my consciousness—my truth.

Could it be that the introvert in me is the real one within me who has been suppressed by the noise of everyday life? What if the biggest contributor to my perceived struggles has been myself all along and the environment in which I have chosen to heal.

When I am this person, I am calmer, I am more considered, I am kinder, I am a better version of myself. I am the person I want to be. Making better decisions. Seeing clearer.

Being alone and being lonely are not the same—I have learnt that in my enforced isolation, I have found a new peace in the solitude and now know that, for me, it is as necessary as eating or drinking to my survival. It’s no longer something I fear, but something I embrace.

Mostly, I have realised that time is precious. It’s the only thing that matters—making each second of the hours we are blessed with count—pursuing things that are meaningful, deciding to spend time only with the people who make you happy, calm, and feel loved. Choosing to make myself a priority, acknowledging new truths, establishing better boundaries, and taking pleasure in the simplest of things.

Ruin is a gift. Ruin is the road to transformation.

Real Awakenings are Not Elegant—they are Messy, Ugly, Shattered & Raw. 5 Tips for Butchering Your Life (So You Can Finally Live).
See relevant Elephant Video