“This is garbage,” my brother muttered as he threw the hedge clippers into the garbage.

“What is wrong with you?!” I demanded an answer. “Those were Dad’s!” I shouted.

I simply couldn’t understand my brother’s behavior, and I was seething mad.

“It’s rusted! Look at these hedge clippers! These clippers are a tetanus shot waiting to happen!” my brother explained to me in his overly straightforward way of speaking. He then threw the clippers in the garbage.

I just stared at my brother; he looked back at me and said nothing. I was still waiting for my brother to follow-up, some sort of justification for throwing out my dad’s clippers—nothing.

I am a person who has had more hospitalizations than he can remember during these difficult times of extreme stress on the family unit.

My dad not only kept his own calm, but was a model for rational thinking. Despite my dad’s own anxiety and stressors, my father put his “stuff” aside when it meant the family and his son would benefit from staying in control of himself.

My dad has been by my bedside during visits to the ER, psychiatric, and medical visit every time I landed in the hospital. From childhood illnesses like chickenpox, the flu, or the common cold, my dad was no stranger to playing the role of a nurse alongside my mother, teaming up with her to restore my health from whatever was plaguing me at the time.

My dad was a one-man rehabilitation team when I broke my pelvis and needed round the clock care three hours from home at graduate school. For the first time in my dad’s life since his military service in his young adulthood 40 years prior, my dad lived away from his spouse and home.

Home is where my dad was the happiest—roaming his front and back lawn with the hedge clippers, taming the great wild that was our quarter of an acre of property. We didn’t have a massive lot of land, but when my dad ventured out to do yard work, he was happy, content, and often got lost for hours at a time, just to turn up at our screen door with grass stains and dirt on his overalls.

Because of my affection and closeness with my dad, I was the first to diagnose his dementia five years ago. Analyzing my dad was pretty straightforward. My dad’s general presentation was shifting. He was having memory problems.

Don’t get me wrong, my dad’s memory was never particularly spectacular. And yet, I couldn’t help but notice five years ago, the visible deterioration in his memory and the staggering rate of decline. It was as if his memory issues were speeding up and intensifying.

Five years have since passed since my dad’s initial diagnosis. Until a week ago, my dad, while ever slightly more forgetful, was still driving a car, taking care of himself, and getting out and about the community.

A month ago, my parents were visiting my home and bringing over breakfast. I received a phone call from my mom. She was in the car with my dad traveling with him down to visit:

“Max, you have to come downstairs…”

I had first thought my parents were too busy to stop by and wanted to move on with their daily activities driving around town as two retirees.

That morning, I took the building elevator down to the lobby. The slow-moving old elevator shaft couldn’t move fast enough. When I didn’t see my dad and mom at the front door, as usual, I got nervous. Walking outside, I found my dad clutched to a metal pole by the foot of my building.

“What’s wrong, Dad?” I asked him, tearing up. “I just can’t walk anymore…” my dad mumbled. He was shaking, and his voice sounded strange.

These days, my dad is now almost totally incoherent and is more confused than ever. He can barely stand up. He needs feeding and 24-hour supervision.

My mom knows full well that if she wishes to continue living with my dad, they will need to move out of our family home into an apartment where my dad can live more independently.

Yesterday, he gave me his hedge clippers to give to my brother for his new home in his confusion. That is why I was so mad when my brother tossed them in the garbage.

The clippers may not have meant much to my brother, and he likely didn’t understand what they meant to me—still, for me, they represent a deep connection to treasured memories of my dad’s happy times before dementia took its course, and life took a turn.

The clippers were a distant and not forgotten relic of his joy when and where he was the happiest—home with his family.

Despite sickness or discord throughout the years, I was always sure of one thing—my dad’s love for gardening and trimming the foliage in the yard. The clippers, and these memories, are as vivid as they are grounding. They reassured me of my dad’s strength and compass when the family needed just that—stable, unfettered guidance.

Relics like the clippers and other things, which are now memories, will always remind me of my dad’s permanence—despite my sadness in his mortality. 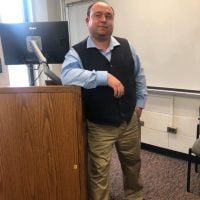 5 Things I’ve Learned from my Mom’s Dementia (& Eckhart Tolle). One Thing We can Do Now to Prevent Dementia. A Dance With Dementia: How Spiritual Discipline Helps the Process of Losing Who We Are.
See relevant Elephant Video