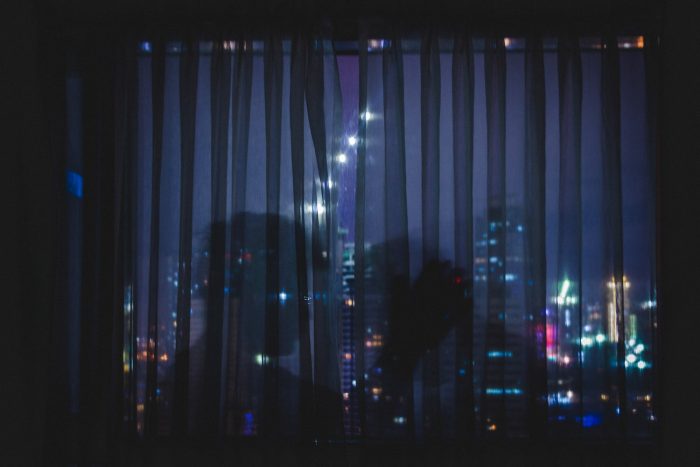 I packed up my flimsy 2013 Ford Fiesta and made the four-hour drive to my mom’s house in New Jersey, desperate to get my fingertips on a semblance of home.

I was broken—yearning for the sense of belonging, the freedom to be.

It was Halloween weekend in Washington, D.C., and dressing up to go out to bars in a costume sounded too similar to the pretending I had been doing every weekend for the past year.

Once I arrived in Sparta, New Jersey, I settled my things into my baron bedroom. I haphazardly chucked my suitcase into the blank space between my former dresser and twin bed.

I poured a goblet-sized glass of the cheapest wine I could find at the liquor store and rendered myself horizontal on our ancient, green plaid couch.

My mom slipped upstairs before she would inevitably turn into a pumpkin at 9 p.m., and I was left to stare at the same three apps on my phone for hours. With my mind free to wander, I recalled my roommate’s suggestion from the weeks prior.

“You should download a dating app! It’ll be good for you—you could use a distraction,” she said.

A social media hipster, I was always averse to subscribing to the latest technological crazes before being persuaded heavily by a friend. However, feeling hollow in my hometown, I decided to finally give it a whirl. What’s the worst that could happen?

I chose a photo from my Facebook profile and skeptically scrolled through the Sparta suitors.

I see a large prized fish, but no face? What does he even look like? I hate fishing.

Questioning everything within my consciousness, I persisted through countless photos of men within my location radius flexing their egos and touting their unsavory bios when suddenly—a familiar face.

His Virginia Tech jersey evoked nostalgia before I even processed who he was. He’s cute.

His first message converted the cringe on my face from browsing the former gallery of guys to a smile: “Hey, you wouldn’t happen to be a Hokie, would you?”

Jeff and I not only went to the same high school in a tiny town in Northern New Jersey, but we both were some of the only alumni to attend Virginia Tech. A senior when I was a freshman, he was always on his way out when my freshman toe had just entered the door. We knew of each other, but we had never spoken or crossed paths in person.

I giggled my way through every exchange. He mentioned that he wasn’t busy that night other than the fact that he was watching his three-month-old nephew. A 26-year-old man was looking after a newborn. My interest was piqued. After hours of chatting, he asked me to go out with him the very next night. Hesitant to pursue a romantic connection, I obliged. There has to be a reason he was put on my path now. We could have met so many times before, I convinced myself.

Apprehensive and unprepared for the unpredictable autumn weather, I wore a light sweater and brought another similar sweater with me instead of the neglected jacket I left behind in D.C. Sweaters on sweaters. He’s going to think I’m so weird.

We ordered a bottle of Cabernet and both of our eyes were drawn to the same cheeseboard titled after what we discovered was one of our mutually favorite Abita beers, Purple Haze.

Our first step into common ground was a catalyst for a walk down memory lane where we reminisced about our alma maters. I felt like I could relax. I was comfortably consuming everything in sight and getting heavier by the minute, but I somehow felt lighter.

We pulled into my mom’s driveway and the inevitable beat before exiting the car after the date was upon us. Do we hug? Kiss? Kiss on the cheek? Do I slap him across the face so he never calls me again and I don’t have to go through the hell that is being in a relationship? So many questions.

I was relieved when he leaned in for a kiss. Sweet, soft, brief, and sincere. My teeth chattered as I shut the car door and whispered, “Goodbye.”

I watched the headlights fade away when I noticed that I only had one of my two superfluous sweaters. Oh no. Of course I would leave it in his car.

Cinderella lost a slipper; I lost a sweater. Only she was a princess and I was a severely depressed twentysomething. We are not the same.

On my drive back to D.C. the next day, I nearly smashed my tiny tin-can-car into the side of the road when I saw a text from Jeff: “I’m having Chipotle—you should be here eating it with me.”

This man not only took me on a beautiful date, but now he’s painting beautiful burrito imagery. He’s the one.

Our long-distance journey had begun. He consistently reached out to me to make sure I knew he was interested. We took turns making four-hour drives to see each other every other weekend. One weekend, when it was my turn to see him in Hoboken, New Jersey, we finally addressed the sweater incident. He got it dry cleaned. He got my $15 H&M sweater that I left on the floor of his car dry cleaned. What a man. Can I drop my work clothes in his car while I’m at it?

Despite the distance, we were growing closer—but the more I was falling for him, the more I made it clear to him that I was still recovering from a traumatic relationship.

“I haven’t been with anyone for a year. I’m trying to heal from some heavy things, but I really like you,” I said. “I hope you can bear with me, but I understand if you can’t.”

That didn’t deter him from respectfully pursuing me, and he never pressured me to be more invested emotionally or more involved physically. He traveled after endless workdays just to spend time with me. There was never an ulterior motive. He just let me be.

During our weekends on my turf, we never stayed at one restaurant for too long in the mystical little town of Shirlington. Our favorite canvas for our deepening bond, we painted our nights with broader strokes each time. We would hop from Guapo’s Mexican restaurant, to Cheesetique, to Samuel Beckett’s, where we waltzed our way to the stage in front of the live performers. Jeff would swing me around on the tiny dance floor while we struggled not to spill our Black-and-Tans.

We laughed until we cried, and he became a safe person for me to cry to. I gradually opened up to Jeff about the parts of my past that I wished could stay there, assuming they would make him regret all of the mileage he’d already spent on me. However, he didn’t blink. His eyes welled with admiration while he assured me, “You mean the world to me.”

On Valentine’s Day, I sat on his lap while his deep, brown couch swiveled beneath us and a nearly depleted bottle of Oregon’s best Pinot Noir reflected the city lights on the coffee table beside us. With some liquid courage, I decided to ask him a question that I had been avoiding for months since our fateful night in Sparta.

“What do you think about us?” I stuttered.

“I think…I think I’ve really fallen for you,” he said. “One day, I want to have a bunch of kids and open a winery and we can plant the first tree there together.”

Tears swelled in my eyes.

Sitting in his apartment, surrounded by empty pizza boxes, I had found what I had been yearning for—home.