Something Waits Beneath it All—Winter’s Invitation to Aloneness. 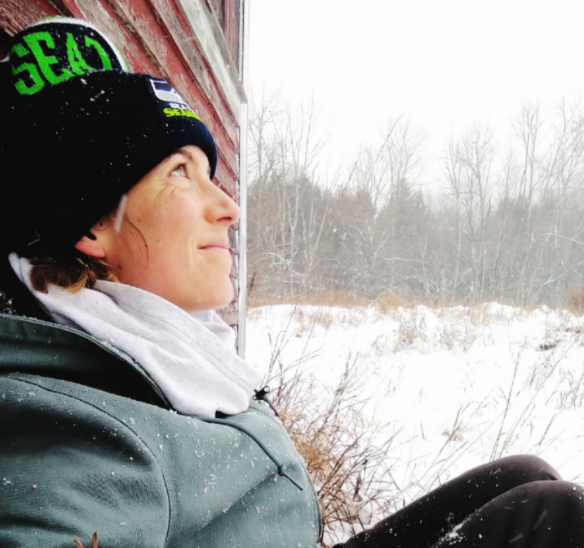 I wake to a swirling of white outside, catching in the kiwi vines and framing the edges of my window panes. The first snow.

Two nights ago marked the midway point between the autumn equinox and winter solstice here in the Northern hemisphere. This morning, I hear winter’s wild, haunting voice, calling in the wind as she gusts sidelong in powdery breaths.

I feel this—down to my bones—as I sit on a hilltop with my back against an empty barn, bundled in insulated bib overalls. I am as warm as I can be out here, but my spirit shivers at the chill.

I stare out at the field of dead milkweed—their seed pods dried, cracked open, and emptied weeks ago—and know that I, too, am a landscape preparing for the winter season.

I do not fear the winter. I have learned how to lean in and embrace her call to inward tending, to slowness, to shorter days and darker waking moments, to tending my own hearth fire.

But this winter will be different, new.

This winter, I will be alone.

Not alone in a marriage—the kind of aloneness I grew accustomed to for years. Not alone as a single woman in a familiar landscape, as I knew for years before. No, this is a more thorough aloneness than I’ve experienced: thousands of miles from where I considered home, without friends or family, sequestered on a remote farm in the midst of a pandemic without end.

A little more than six months after walking away from my marriage, and two months after ending another relationship, I am finally single for the first time in over a decade.

The last time I was single, I was not long out of grad school with a degree I didn’t want anything to do with. I was freshly heartbroken, had no idea what loving myself meant, and still existed within the multiple boxes I had never known I could question as my given identity.

I wasn’t looking for a new relationship when I met my husband; I was only trying to learn how to be confident and free, starting with salsa dancing.

At that point, I subconsciously no longer believed in a love in which I could ask for my needs to be met—where I could actually be cherished. I’m not sure I ever did. I got what I expected, I suppose, without even realizing it at the time: a less-than love.

The last time I was single, I held vastly different political and religious beliefs. I practiced celibacy. I thought I had no choice but to have kids one day. I had friends I thought were forever who are no longer in my life. I was afraid to create waves, though I’d had a few opportunities to practice doing so.

This time around, I hardly recognize the woman I am from the one a decade ago. Hell, I’m a different woman than the one who rang in the new year at home 11 months ago.

I’m untethered from many of those old threads, but I’m not lost. I am far from a geographic home, but I am home to myself. I am alone, but I am accompanied. I am empowered. And I know, finally, what I am worth.

I am readying myself, as the season yet again shifts forward, to embrace this vast aloneness.

Winter invites me to step outside into the barren, frozen, unfamiliar landscape, and feel it all. The blood rushing to my cheeks as I trudge through snow drifts, the numbness of my fingers, the soft wet flakes on my eyelashes, the wind whipping around me, the pulsating life of it all in spite of its apparent dormancy.

And then, winter invites me inside my cottage, to sit under a blanket with a cup of coffee and bread in the oven, resting and writing and reading and tending, as I sit with it all and let it be.

Winter does this; it extends us an invitation to paradox: to the darkness of dormancy and the light of fire tending.

So often, we fight the shorter, darkened days. We push ourselves outside our natural rhythms. We fear the chill, the howling wind, the barren and skeletal land, because these are mirrors—and we think they may consume us.

But I have grown to appreciate this season the way the great painter Andrew Wyeth described it:

“I prefer winter and fall, when you can feel the bone structure in the landscape—the loneliness of it—the dead feeling of winter. Something waits beneath it—the whole story doesn’t show.”

The whole story doesn’t show. Not right away, especially not here in winter. I find great comfort in this mirroring of outer and inner landscapes, as I wait for the something that lies beneath it all to one day emerge from the ground.

And it is only a season. Everything is seasonal, cyclical, in its own way. When we learn we don’t have to push back against this, that instead, we can accept the season’s invitation to be wherever we are, fully present, we shift from a place of fear to power.

The power of surrender.