We were Supposed to Grow Old Together.

A subtle smile organically formed across my lips each time I caught sight of him.

Uncontrollable flurries in the pit of my stomach were instant, despite him not being my ideal 6’4″, chocolaty bar type (he was only 6’1″ with light brown skin).

Handsome he was though—with his clear skin, those deeply imprinted dimples complementing each cheek, and a head full of long curly locs.

Sometimes, when Anthony would catch me walking to my on-campus apartment and roll the window down to say “hi” in that dated yet well-cared-for black beamer, or greet me in the student union hall with his nerdy swag, glasses and all, I’d have to stop myself from pouncing on him like a lady cougar hunting her prey.

There was a casual flirtation between us, and maybe something else—some crazy, cool energy we shared that I couldn’t quite explain.

We formally met at a university black caucus group, whose purpose was to serve as a resource and academic support for black students. Around late October, Anthony and I were tasked with planning a fashion show to raise funds for the group (I was a public relations major, he was the extroverted fraternity guy, and we had qualifications for ensuring a successful event)—so, we scheduled lunch to discuss details.

Soggy chicken nuggets and overly cooked stir-fry noodles weren’t exactly what I had in mind when we met up for our lunch date, but what can I say—we had money on our meal cards and little in our wallets.

Albeit, the food didn’t matter because the conversation was so good.

This was also when I heard his lisp for the first time.

“Who’s your favorite artist right now?” he asked, pronouncing his “s” with a slight “th” sound.

“Maxwell, hands down” I replied, blushingly.

“Yea? Mine too,” he smiled genuinely.

As we reluctantly drew the discussion to an end and headed to class, I noticed that the grin on my face refused to relax the entire lunch, leaving me with sore cheeks and a need for self-prescribed jaw exercises throughout the next hour and a half of Spanish class.

The next day, I decided to write my English paper at the campus library instead of my usual computer lab in hopes of “bumping” into Anthony. I mean, we still had a lot to discuss before finalizing show details, and we’d get way more accomplished in person versus a phone meeting (at least that’s what I told myself).

When I spotted him, his intensity for whatever he was reading made me want to turn around and walk away so as not to disturb, or come off as a stalker. Instead, I watched intently as his bare feet slid back and forth against the brown spotted carpet.

It was his intelligence and determination for me.

I couldn’t see his actual face, for it was buried behind stacks of chemistry, trigonometry, and engineer-type books that made my brain dizzy. When he finally looked up, I quickly started walking again, pretending I had a final destination in mind. We both smiled as he shifted his books to the corner of the table to make room for me.

We chatted about the show, then about the weather, the stars, our take on recently released movies, everything and nothing at the same time. Our talks were easy-going. They could have been about watching paint dry or the state of politics, and, either way, we’d have been completely enamored with each other’s energy.

Hours later, he and I were no closer to finishing our assignments, but we did pull together a decent fashion show agenda, which I was to also model in. We also made plans for our next date.

“Well, that went well,” I said as I approached Anthony after modeling in the final elegant category of the fashion show.

I wore a fitted, sequined, backless, candy-red evening gown, and I noticed he couldn’t take his eyes off of me…nor that giddy smile off his face.

After grabbing a quick bite to eat, we ended up at his place. Our engaging conversation continued on the outside patio in the southern, sticky, moist air—which, by the way, had nothing on the situation between my legs. Until finally, the mosquitos buzzed and threatened enough to scare us inside.

Mellow sounds of Maxwell’s “Urban Hang Suite,” and a sweet, vanilla bean scented candle permeated throughout the house as my feet seemingly levitated off the floor during our slow dance to “Til the Cops come Knockin.” His left hand rested on the small of my bare back while his right fingers tickled my cheeks and moved down my neck, then shoulders, and then waist while we swayed back and forth in unison. He had a good rhythm.

In an unexpected turn, he guided me against the wall and went for it—an intense kiss followed by more of the same, from my neck to my knees. I wondered if it was possible to die of excitement, and decided I wanted to spend a hundred lifetimes with this man.

After that fervent night, Anthony asked me if I was “cool to kick it” with him the next day, and the next, and the next. A little over a month later, he not only graduated, but he also moved to Europe for an engineering internship. Even then I couldn’t let go of the idea that we’d end up together again. Someday.

I wanted every interaction with him back. Our conversations, that indescribable energetic connection, his hands, his voice, his lisp, his intellect.

And now? I write these sentences between sudden waves of emotion for him. I still feel what I feel.

He and I were supposed to grow old together.

If your heart is longing for a little more love: 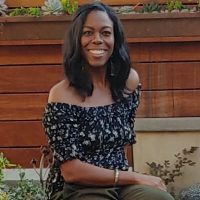 Janie Guy is an optimistic thinker who lives to learn, find purpose, and be a helpful human in an “out of this world” world. She is also a long-time communications… Read full bio