You Can’t Erase a Sad Childhood with Alcohol. 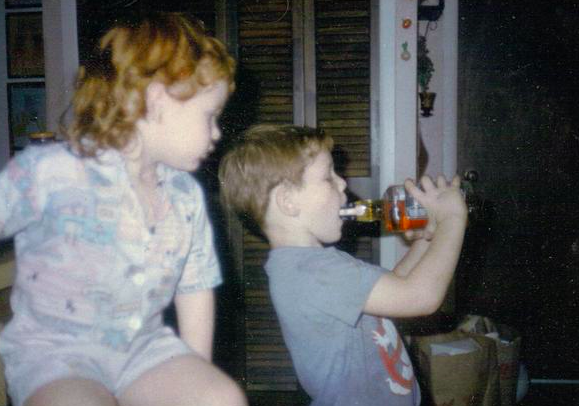 Believe it or not, even though I am painfully aware of the correlation between trauma in childhood and eventual alcoholism, I really don’t spend an awful lot of time thinking about my own childhood.

I honor it for the sh*t show it was, and I stay in the present with the occasional daydream about my future.

There are rare times, though, when I will be inexplicably surprised with a flashback—and when it comes, it’s brutal. The event will arrive in degrees, initially almost like stage directions and then playing over and over—each playback getting more colorful, nuanced, and real.

By the time it feels fresh again, almost like it just happened, I begin to have physiological reactions: a chill up my spine, nausea, sadness, and sometimes, even tears. It happened again this week. It only took a walk past a bakeshop for me to remember a time when my uncle was sleeping over with his girlfriend one weekend when I was 11 years old. I woke up at seven in the morning to ride my bike to the bakery and bought a dozen hard rolls and butter and brought them home for everyone.

As my dad brought his 400-pound frame down the stairs, he saw the rolls on the counter. He pulled at the top of the bag with an angry pointer finger and looked in with the same expression one might reserve for looking at a bag of dog poop. He then, scowled, “Why’d you get all this? We don’t need all this.”

My uncle, noticing how sad that made me, spoke up.

“This wonderful child rode his bike up to the store for us all to have breakfast and this is how you thank him?”

I walked to my room and cried. I remember feeling so many different things: angry that my father was so mean, shut off from the approval I so badly wanted, and vindicated by my uncle. Vindicated because my parents had a terrific way of gaslighting me. There would always be some situation like this happening and it would always be defended by the accusation that I was “too sensitive.”

My uncle’s reaction proved to me, once and for all, what I’d long felt about my parents. The fact that I never received the approval I so badly sought manifested quite obviously in my adulthood. The gifts it gave me led to my becoming a performer, a songwriter, and an author. The curses of it could handily be found in my relationships with women and my many addictions.

Like so many others, I began experimenting with alcohol initially. The first time I remember laying down on a bed that would not stop spinning, I was 12 years old. Unfortunately, that really just made me another statistic.

There’s a famous study that was done in the 1990s by the Center for Disease Control in conjunction with Kaiser Permanente, where they looked deeply into the Adverse Childhood Experiences (now known as ACE’s) of 17,000 people. The likelihood of developing alcohol and drug problems increased exponentially with the increase in the number of ACE’s a person possessed. An ACE can be:

I mention this only to reinforce the fact that alcoholism and drug addiction, which almost always begin before the thinking brain is even fully formed, can never be attributed to “poor choices,” as we so often hear from our more conservative friends.

Most of the time, people like myself, need to experience decades of hardship before these problems can be addressed with any measure of success. There are those who find recovery early on, but these stories tend to be anomalies, not normally how it turns out.

Regardless of what stage in life positive changes occur, the fact that they do is considered miraculous. The statistics for those who struggle with maintaining long-term recovery are as bad as you might expect. For those of us who are fortunate enough to attain it, we learn a hard lesson: we cannot drink, sniff, or swallow our way out of our childhood memories. They need to be faced, and they need to be worked through.

And although popular thought is that this can occur easily through $200 an hour sessions with your favorite therapist, I tend to be a little wary of slick and quick solutions. It is a process that happens progressively and by degrees.

One success at a time.