Who Am I? – by Online Yoga Teacher, Iva Buzhashka Iva is a wonderful certified Omflow Instructor, writer and Art, Philosophy Scholar. She has travelled the world to experience different cultures, beliefs and teachings. In this article, Iva explores the “relationship to self” diving deep into the age old question…

Yoga practice helps us become aware of our bodies, our emotions, thoughts, our lives and relationships with others and with ourselves. It brings to us mindfulness—the intentional awareness of our present moment, which allows us to connect to our true self. Once we connect, we can easier recognise what our true self is not. The moment we become aware of our thoughts, which distract us from the truth, as they create stories that are not; and once we realize that our thoughts about the past and worries about the future are the products of our presence, and therefore are the present moment, we can fully live the ‘now.’ The clarity in our perception then can lead us to less suffering and a happier life.

To bring in this clarity we use different tools and practices—pranayama (the ancient practice of breath control), for instance. After a simple breath in and out, we already feel released and clearer in our thoughts. The organs in our lungs, which receives the air in the body (and with it prana: the life-force energy) are the bronchi. Have you ever seen what the bronchi look like? They are the same as the trees around us branching far and wide.

We have trees inside ourselves.

We are trees as well.

When coming into Tree Pose (Vrikshasana) in our yoga practice we ground through our bare feet feeling the energy of the earth pulling us down. We reach the arms up and our ‘branches’ open up towards the sky, feeling the energy springing up to the universe. Finding our ground allows us to notice what accompanies this grounding—the subtle energy in the body which movement applies in both opposing directions. In order to go up, to grow and open, we need to connect to the energy that is going down. This oppositional motion connects us to the force that creates all things and causes them to grow though the union of complementary opposites.

In Tree Pose grounding down through the feet and lengthening up through the spine, we feel the core of our body as if it were the centre of the universe (is it not?), feeling as if we were a tree expanding through all directions of the cosmos.

In Hindu mythology the symbolism of the tree of life is identified with Mount Meru, a golden mountain that reaches the heavens as far as it reaches underneath the ground. It stands at the centre of the universe and is the axis of the world. It is the abode of gods, and its foothills are the Himalayas, close to the ‘Land of the Sons of Bharata’ (the ancient name for India).

To enter Tree Pose in our asana practice we start from Tadasana—Mountain Pose.

We are mountains as well.

The Cosmic Mountain in Hinduism and Buddhism is more than a cosmographic map, as the map is two-dimensional and Meru rises up in a third dimension. In doing so, it pierces the heavens. In piercing the heavens, it transcends time as well as space.

In Indian cosmography Mount Meru relates to the sacred: it is associated with the sacred lake Anavatapta, which symbolises immortality; the passage around Meru is referred to the circumambulation of the ritual pradaksina, which articulates the sacred space; and it marks the structure of the universe. Meru is the most significant point, which connects everything that surrounds it. However, the space in Meru symbolism transcends the concepts of place in human’ perception.

Existing as a vertical, as well as a horizontal equilibrium, Meru becomes a channel, joining the mundane and the sacred world. It relates the human existence with the timelessness of the divine, as in ascending Mount Meru one acquires a spiritual state. By pointing upwards outer space is transcended (as is outer time) and Meru becomes Purusa (the universal human), becomes the Self, becomes the shaft by which one rises to salvation.

Meru and Purusa (the cosmic man) are mutually superimposed. In Tantric meditation, Meru is associated with the physical spine of the worshipper. It is the median canal running upward from the perineum to the space above the head. At the base of the spine sleeps Kundalini, the serpent goddess personifying energy in the form of a coiled serpent. The awakening of Kundaini in meditation causes her to rise up through the Meru channel to the highest of the seven chakras, where the union of Siva and Sakti finally takes place. This union liberates the worshipper from the bondage of samsara.

In this moment, the worshipper, who is Meru, comes into being as a cosmic tree, stupa or world mountain. The ‘outer space’ becomes ‘inner space,’ the transcendental becomes immanent—bringing the awareness inwards transforms Meru into Purusa, into the Self.

Who is the Self?

Take the ‘space’ to listen. The space of the present moment.

The intricacies and parallels that can be drawn between the internal and the external are a reaffirmation that we humans are truly microcosms of the macrocosm that is our world, our planet, our universe.

You are a tree breathing life through a crown of branches; you are a sacred mountain expanding up and down, and through all directions of the universe—the universe within you.

Everything that you want,

“If we can manage to overcome the divisions and we come together and live from our heart, the world will be a better place…” 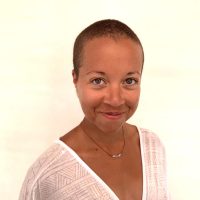 Jeni Louise is a teacher, author, and community member of Omflow on Elephant Journal. Omflow is a growing growing collective of like-minded individuals that aims to inspire gr… Read full bio