America Through the Looking Glass.

.@POTUS Joe Biden and @VP Kamala Harris.⁰⁰After four long years, compassion and real leadership are finally back in the White House.⁰⁰Now it’s time to work together to solve our nation’s problems, beat this pandemic and rebuild an economy that works for everyone. pic.twitter.com/fggJQeT42Z

As a Canadian, looking in at America, I often feel like I’m looking through one of those two-way mirrors we often see in crime dramas in police interrogation rooms—watching from one side and the other side totally oblivious as to what is going on behind the glass, not knowing how many people are watching the drama unfold (spoiler alert, it’s a whole lot).

It’s like we (the rest of the world) are looking in, wanting to help America with the struggles it’s been dealing with the past four years, with the pandemic, with everything that’s happened since 2016, but being unable to interfere.

We just have to let the crisis unfold as we look on helplessly, no matter how much we’re banging on the glass screaming, “Stop!” or yelling until we’re red in the face, “Can’t you see what you’re doing?”

It’s like the sequel to Lewis Carroll’s Alice’s Adventures in Wonderland, sometimes called Alice Through The Looking Glass, where in the world reflected back through the looking glass, everything is opposite than what it should be. If you want to stand still, you have to run. If you want to move forward, you have to walk away. Everything is topsy-turvy and doesn’t make sense.

That’s what America has seemed like the past four years—everything has gone wonky. You expect things to happen a certain way, but instead, the total opposite thing occurs, and we’re stunned, wondering what the f*ck just happened.

I think a lot of us, both outside and within the U.S. right now are trying to wrap our heads around what the f*ck has happened over the last 1,460 days.

Yesterday marked the end of an era with Joseph R. Biden and Vice President Kamala Harris stepping up to the plate. I saw a lot of stuff shared online along the lines of “America is back!”

Well, we can’t get too ahead of ourselves. One day doesn’t cure all ills, just like rolling over from 2020 to 2021 doesn’t automatically stop the pandemic (which is what some people feel that’s how it’s worked).

A new year, a clean slate, everything is back to normal. Uh, how’d you figure? Maybe we can start with “America is on its way back.” It’ll take time. It takes time to heal. We can’t just get better instantly. Rome wasn’t built in a day, as they say.

But this new administration has got me thinking. I have to wonder, from a philosophical standpoint anyway, if the previous four years were a sort of “dark night of the soul.” Was it something that was inevitable, in order to wake people (not just Americans, but the world) up? To shine a light in the dark places, on issues that needed to come to light, that people had averted their gaze from for so long but could no longer under the glare of the spotlight shone upon them? To fight our way through a feverish illness, only for that fever to eventually break and allowing us to come out the other side, clearer and stronger, with more purpose?

Was it perhaps like the meteor that slammed into our planet all those billions of years ago, causing the extinction of the largest land animals on Earth, but which paved the way for tiny mammals, and, eventually, for us to begin? Yes, it was destructive, almost to the point of annihilation, but after the dust settled and the sun eventually came out again after a long nuclear winter, look at what survived. Look at what grew and evolved: us.

Was it like lava from a volcano, swallowing up everything in its path, leaving nothing behind, but soon after, the richness of the soil allows vibrant life to grow once more?

By razing everything to the ground, has the past four years cleared space for growth, for moving forward? For starting from scratch? Beginning again? Hitting the reset button? The phoenix rising from the ashes. Seeing without the clouded fever-vision, but now with clear eyes. Seeing the hope, the light.

And maybe, just maybe, we can allow ourselves a bit of a deeper breath. Allow a bit of a smile to turn up the corners of our lips (side note: just that simple action helps us in so many ways—smiling helps us relax, lowers our heart rate and blood pressure, and it is a natural antidepressant).

It won’t happen today or possibly even tomorrow (but anything worth having is worth waiting for, right?). But we are on the right path. We’re heading in the right direction. We’re on the yellow-brick road headed to the Emerald City, finding not just our courage, our hearts, and our wits about us, but our purpose and resolve along the way.

And in the distance, we can see something beautiful catching our eye—a world of possibilities. 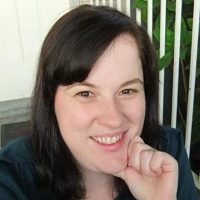 Caitlin McColl is a yoga and meditation teacher and fantasy writer (mainly Steampunk) from the soggy part of the Great White North otherwise known as Vancouver, BC, Canada. On… Read full bio