It was a long Saturday afternoon when I attended the revolution in the capital, Beirut, with my best friend.

We marched toward the parliament, hoping we could break in since this was the place where most of the corruption had started.

We hoped to make a change, but we were faced with brutality. There was destruction everywhere and shattered glass permeated the streets of Beirut.

We marched with a big group of people toward the parliament guards who started firing smoke and stun grenades at us. I remember one of the stun grenades hit the floor full of glass near me. I escaped to hide behind any wall I could find. After it exploded, I was lucky to find one small wall that protected me.

But shortly after I heard the explosion, my eyes were closed. When I opened them, I saw people with blood and bruises randomly running among the scattered glass. I searched for my friend, but I couldn’t find him.

Then I started hearing gunshots—either rubber bullets or real bullets; I wasn’t sure. I sought shelter in a building with some other people who were trying to escape the smoke. We managed to go on top of an abandoned building and got to see the guards shooting real bullets straight at the protesters.

Seeing this was shocking, but the not-so-shocking part was that, in Lebanon, nobody is held accountable for their actions.

That was only one day among hundreds of other days since the Lebanese people have been rebelling against the system. On 17 October 2019, a revolution started in Lebanon against corruption and its corrupt politicians who are still governing since the civil war in Lebanon in 1975.

The same faces, the same people are still in power, stealing billions and billions of dollars that reached the Mediterranean shore to help the Lebanese people.

Billions of dollars have been sent to Lebanon to make better infrastructure, to get better 24-hour electricity, and to improve public transportations.

But here’s the reality now: the power goes out every day (yes, we plan our day depending on the cutoffs), we pay two electricity bills (one to EDL and one to the local generator owner), and we don’t have access to drinking water except through purchased bottles from water companies.

In Lebanon, our public transportation is uhm…how to say it…sh*t, and infrastructure is a disaster. All of this because of the corruption that has become a core element of the government since the 1990s right when the civil war ended.

In October, more than two million Lebanese took to the streets to build a new, decent foundation for their beloved land and remove its politicians who have been stealing money and smuggling for years now.

The revolution had physically failed because the government used its force through the army and internal security forces, which made it harder for us to win without help or interference from the west.

Through cruel violence, the government tried to silence people. Many died, many lost their eyes due to straight rubber bullet attacks, and COVID-19 came on a silver platter for our corrupt politicians who were more than happy to stop the revolution by applying strict lockdown rules.

The favor might not have been in our favor this year due to the pandemic, but the revolution is still ongoing in our hearts and social media channels.

We’re trying to change the small stuff (that are huge at the same time), like university and syndicate elections that were won by the independent people.

This has been our way to fight the corruption, but the way of the west has been through applying strict sanctions on our corrupt politicians. As independents who hope for change, the sanctions, at first, appeared like a good step that could reduce the government’s power, pressure our politicians, and not let them steal the people’s money.

The truth is, now, sanctions are affecting us as a whole country and on an individual level—not only our politicians. We’re struggling to survive because of these sanctions, and, in a lot of cases, our people are immigrating to other countries because they’re safer and more promising.

The blast of August 4th wasn’t easy for us either. We’ve been receiving donations, but not really using them. The government has succeeded in either selling the donated products in the market or taking some of them.

What we really need from NGOs is to work closely with the Lebanese people and not the government.

What we really need is awareness so we can make better choices in the elections.

We don’t need more sanctions that hurt the Lebanese people.

We want more independents who want to change their country for the better. And the way to do this is through proper education.

We want to stop the corruption and build a true democratic country. 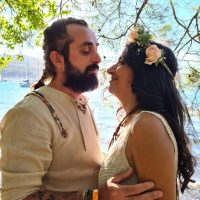 Estephan haddad is a nature, sea, and animal lover. He’s a thrillseeker who loves extreme sports that get his heart pumping. Brewer and distiller, and yes, he loves humm… Read full bio