Probably the Most Crushing (& Inspiring) thing you’ll Ever Read.

What it takes to accept the things we cannot change.

If you feel alone and like life has been tough these days, months, or years, know that we can all relate to this. We are all in the same turbulent sea, but in different boats, fighting different kinds of waves. Everyone fights for themselves, yet we are in this thing together.

What some people don’t see is that a lot of people are fighting battles you know nothing about. Battles lost in advance. Battles happening in parallel. I have written this because I want you to see a broader picture.

But most of all, I want to reach out to people who are fighting similar battles and feel lost. You, my dear, are not alone. Someone out there is confronting a similar situation right now and feels the same as you do.

Today’s article is about people around the world who are not heard—the ones who have limited hearing and the ones who are deaf.

This is for us.

According to the WHO, there are 466 million people globally with hearing loss. Do you still think you are alone?

Some are born deaf, while others, like me, had to accept this condition almost overnight. Almost. Anyone could be me one day, and anyone can harm someone, but it takes a human to take on the responsibility.

Today marks exactly three years since I was told I had lost hearing in both ears. We are talking more than 50 percent of my hearing.

To help you see the whole picture, I have to return a couple of years back when it all started:

It was the beginning of 2015 when I first started noticing my hearing worsening. I just had no idea how bad it was. I thought it was other people not speaking clearly enough. You see, you don’t “hear” the difference; you just slowly slide into silent mode. Quietly, but surely.

It was until I moved to Germany that it started bothering me, but I put the problem aside as I could still live normally. I guess the reason why I kept postponing the medical checkup was the fact I could get away with it with a few more questions. “Sorry, what did you say again?”

It was, however, intimidating.

Sixteen months passed, and the time came. The day when it became official. That’s when it hit me hard.

It took me something like five attempts with different airlines with specific requirements to finally get a job as a flight attendant in the Middle East. It would be an understatement if I said I was excited when I was chosen among so many candidates and made it to the final few “golden” candidates.

It was so much more than that. It meant the world to me; it was a huge confirmation that I was on the right track by not giving up. I was happy and grateful for the opportunity to the moon and back! On an Airbus!

Then the medical exam prior to the job happened. It showed that I had (will always have) permanent hearing loss.

Doctors were just as surprised as I was. Until that day, I didn’t realize how serious the condition was. My opportunity to fly was taken away almost within the same moment I got the wings. My world collapsed in less than a minute. I was robbed of my long-term dream, and I had made many sacrifices for it.

My hearing condition didn’t have a negative impact only on that specific job. It vastly affected me as a person, as well. Suddenly, I felt stigmatized and lost. I didn’t feel like me anymore. In my late 20s, that was a harsh thing to process. I couldn’t swallow it, and I’d seen reality biting before. By the age of 27, we’re supposed to know who we are and where we are heading. Suddenly, I found myself in the middle of nowhere with nothing tangible in my hands.

I had so many questions and not a single answer. I just wanted to know what caused the hearing loss. I wanted the answers. I wanted to float up to the surface and take a deep breath again.

All that was left was to buy a hearing aid.

It’s taken me a long time to overcome the love-hate relationship I developed with it, and it still doesn’t sound natural to me. It never will.

Even now, when I take it off at the end of the day, it feels like I’ve submerged myself underwater; the world around me is suppressed, but I feel safe. It’s the kind of world that has become oddly familiar to me now. It’s scary how something I’ve been searching for in this loud, mad world for so long has now become my reality: the sound of silence.

It’s even stranger how one can get used to it. In some weird way, it feels almost peaceful to sit in silence without a hearing aid.

There were days I used to believe the other half of my hearing would return. But as the years have gone by, I’ve stopped waiting at that train station. When I look at things in retrospect now, the only thing I think is: silly girl. My hearing loss can only get worse from here. I will be lucky if there is any delay in that worsening.

Plot twist! Here is another part of my past:

I thought, what if my hearing loss didn’t just happen out of the blue? Many things in this world, even water, are harmful in high amounts. And so is medicine in large doses. I believe in facts (and a pinch of everything else).

Things I had already accepted (so I could move on with my life), things that were bothering me for so long, the many unanswered question marks—all those things had to have a logical explanation.

My curious spirit and interest in research led me to some medical research and a scientific publication. Unfortunately, it confirmed a link between hearing loss and an ingredient in the medication I had been taking a few months before it all happened. Things like that don’t happen by accident; they are finalized by a decision.

Suddenly I wasn’t lost anymore; I was sad and angry. Angry because this could have been avoided. And sad because the battle was already lost.

I finally knew why my life was the way it was.

Which is worse: to know the truth? Or to live not knowing?

(This question still haunts me from time to time.)

Sometimes we have to shatter into a million pieces to get the chance to rebuild ourselves from scratch. If there’s a silver lining to any of this, it is that I can focus more on myself now.

To not hear everything is a blessing rather than a curse. I believe I miss half of the unimportant things, and I’m glad I do. This world is full of distractions, and it’s okay to let things pass by.

As long as I can do my thing, that will do.

There are many kinds of shame in this world, but, for me, hearing loss isn’t one of them. It has changed my life forever, but I will not let it change me. I choose to stay who I am—every single day.

And so are you.

Don’t let anybody ever make you feel like anything less than a masterpiece. 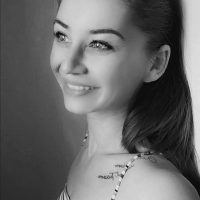 Jerneja Cmager is not just a writer at heart but a storyteller. Her curiosity has led her to move many places and brought her back to where it all began – to her roots. … Read full bio