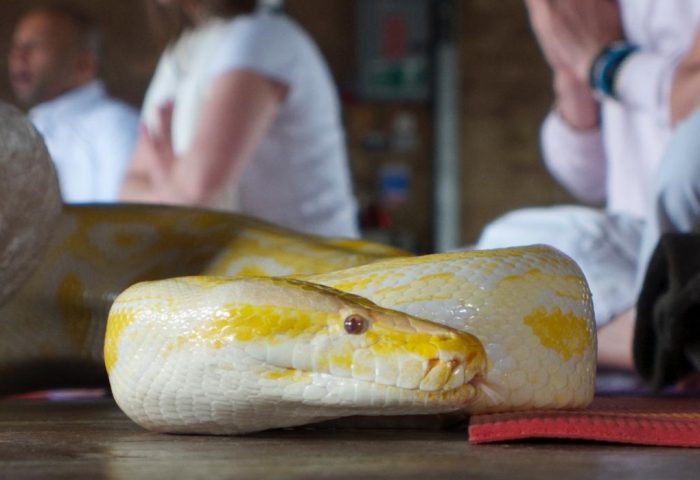 No Woman, Child, or 10-foot Burmese Python should ever be Abused, Trafficked, Enslaved, or Tortured.

This event is raising funds to rescue and rehabilitate women and children from sex slavery, trafficking, and child marriages.

And now, for the mad but true tale of real-life yoga heroinism:

It started with a dream.

“Kumi came to me in an extremely vivid dream,” recalls Kwali, a Kundalini yoga teacher from London.

Kwali is cool, alternative, real, down to earth. She has always rescued snakes and taken care of them in her serpent sanctuary.

“So many people get snakes and don’t understand the work they entail, nor that snakes can live up to 30 years,” she says. “I work with the snakes to heal people from their fears. Snakes are massively misunderstood. They represent the earth element and they’re incredibly mystical healing creatures which are not aggressive.”

One Monday night, Kwali was booked to work at an event. She describes the event as strange, not her normal gig. When she arrived at the address, it turned out to be a dodgy nightclub run by gangsters. It all became clear as soon as she saw Kumi, the 10-foot Burmese python who had visited her in a dream.

Kwali understood exactly why she had been guided to this strange underworld gig. The huge snake was in a tiny tank and was extremely unhappy. They had no clue what they were doing with the snake, feeding it chicken from a supermarket, which is so not what a snake eats in the wild.

Kumi also had cigarette burns and scars on her from being used and abused in this club, paraded around like some sort of trophy by scantily clad women with sparklers (indoor fireworks). This beautiful sentient being was burnt, starved, and stuffed in a tank that was way too small.

Kwali went right on up to the owners, just some regular London gangsters, the usual interaction for a Kundalini yoga goddess, and she laid it on the line. The snake was coming home with Kwali to the serpent sanctuary. The gangsters argued that Kumi had been an expensive acquisition and she was now a part of the nightclub’s entertainment.

Kwali dug deep and went full kick-ass Kali-Dragon-Witch on their asses when they refused to hand Kumi over.

(Side note: this is hilarious for me because I know Kwali as a calm yogini with the grace of an angel. She’s also a tiny, tiny woman.)

Kwali, by this point, had called her partner, Astro (#husbandextraordinaire) to come to the club with a duvet cover to help transport the snake quickly away. Apparently, snakes prefer a pillowcase since that small space is more compact and cozy, so they feel safer. However, there was no way a 10-foot python was goin’ home in something that small, so a duvet cover it was!

Picture this: Kwali, facing-off the angry gangsters. Astro behind her with an open duvet cover.

Kumi and Kwali looked into one another eyes and they had a psychic interaction where Kwali communicated the message, “If you wanna get out of here you need to come with me now sister, I’ll take care of you.”

Kumi immediately got out of her tiny box and she moved fast. Snakes that big do not move fast. But she did. Right into the open duvet cover.

Kwali was still in Full Fire Mode with the gangsters. Astro had Kumi over one shoulder in the duvet cover, like a Saviour Santa Sack, and dragged Kwali out with his other arm.

Kumi ate solidly for six weeks. She was given rose quartz and citrine-infused healing baths. She has been loved by Kwali, Astro, and their two children ever since. 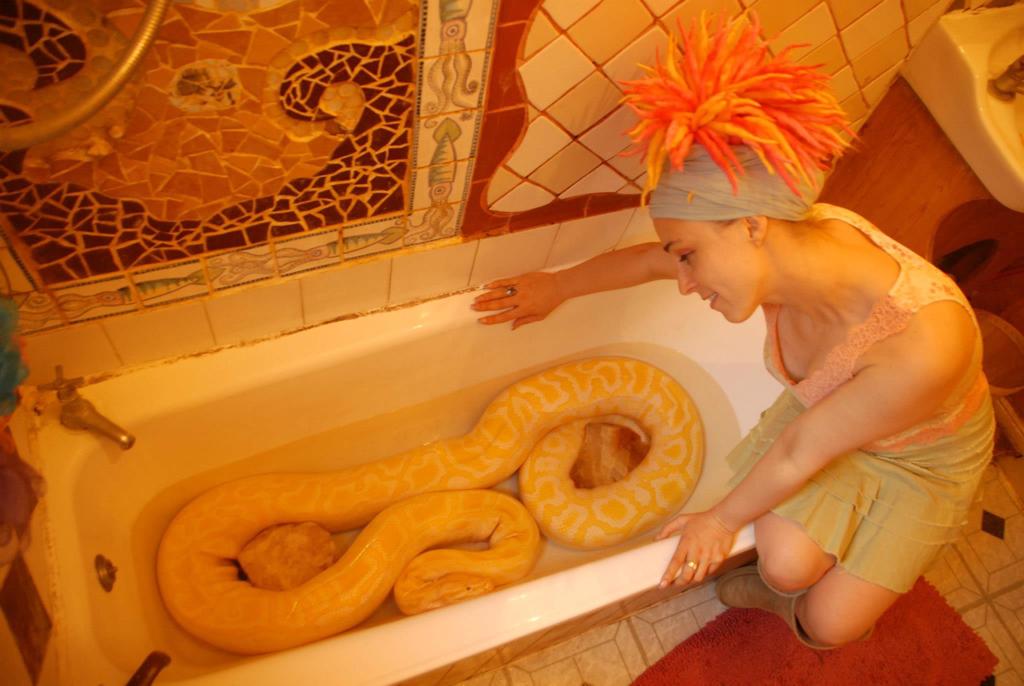 Of course, Kwali sustained abuse and threats from the gangsters for some time. But it was worth it to rescue this gorgeous creature.

Kwali has rescued over 20 snakes and teaches Kundalini yoga with them by her side. They are an integral part of her energy and healing work. She is a serpent specialist, a healer, a yogi, and a Shero animal rescuer.

She says the snakes chose her and guided her on this path in Kundalini yoga and serpent healing in order that she may destroy the negative reputation that snakes have, and to awaken deep love and respect for these stunning creatures here on Mother Earth. Kundalini energy is, after all, a serpent.

More about Kwali! We want more!

Sure: she “found God” on the dance floor as a professional dancer for famous DJs in front of crowds of 10,000 people. Now, that is how you hold space and meet Source energy.

Behold Kwali Kumara, the Wonder Woman with bigger (lady)balls than the sun. 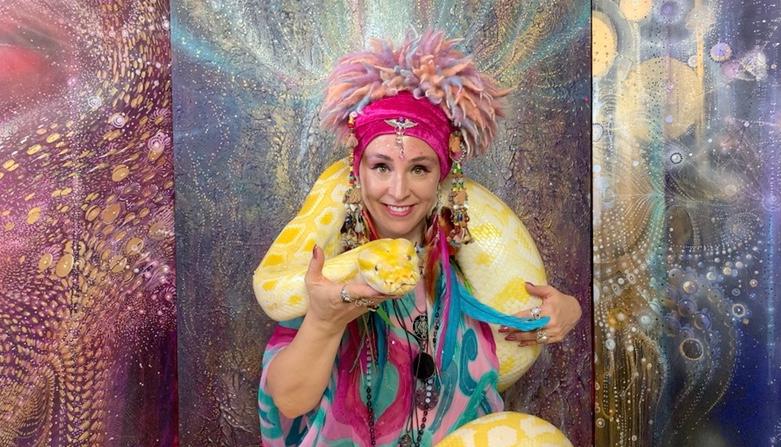 No human and no animal should ever be abused, trafficked, enslaved, or tortured.

Elephant Journal’s own Waylon Lewis allowed me to interview him for the selfsame online event. We had a heartfelt chat about human trafficking and animal rights. I bloody love the geezer. Here is an excerpt of the interview:

The full interview is being streamed worldwide at the online event along with 108 wellness workshops, classes, and interviews. Playback tickets are available. 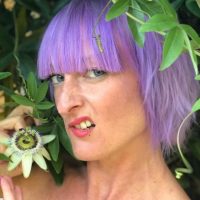 Yo! Rainbow Unicorn Rach Cox to the rescue…trying to shed some light on some dark sh*t in the world and create space for equality and fun. Social justice warrior and pur… Read full bio

Annie Carpenter: Why we are really doing Yoga.