Owning our Power Begins where these 3 Habits End. 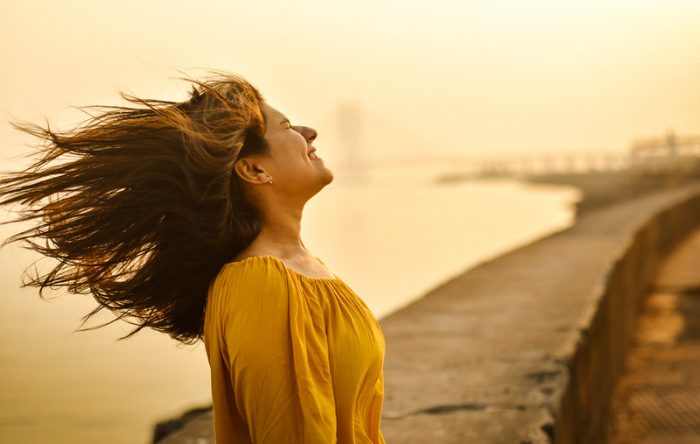 It’s a word that causes goosebumps to rise along my arm.

Power is a word that I have to make room for in my body when I say it aloud. I pull my shoulders back, open my chest, and speak from my diaphragm.

If this is what power is, then to be empowered would mean to be filled with such magnitude. It would mean that we are grounded in our authority. The sole owner of our sovereignty. The last word on our self-worth.

To be empowered means to have ownership over our power—every single bit of it.

Think back to the last time you felt truly empowered. How long ago was that? Were you a child? A teen? What’s happened since then? Where did your power go?

Most of us scattered our power on the path behind us, like breadcrumbs. We gave a little to this person, a lot to that one.

Missing our own power, we sometimes try to give ourselves a boost with mantras or affirmations. But until we stop doing these three things below, no amount of supplementation can mimic the personal power assigned only to us.

Here are the three habits we must break before we can become fully empowered:

Many of us treat power like a currency to trade for things we deem equally or more valuable. High on this list are belonging and acceptance. There’s nothing we humans crave more than to belong. In her book Belonging: Remembering Ourselves Home, Toko-pa Turner says:

“Our longing for community and purpose is so powerful that it can drive us to join groups, relationships, or systems of belief that, to our diminished or divided self, give the false impression of belonging. But places of false belonging grant us conditional membership, requiring us to cut parts of ourselves off to fit in.”

That “cutting off” part resonates with me deeply. How many times have I shrunk down, cut off, or denied aspects of myself so that I could fit into a group? But anytime we willingly (or unconsciously) shrink-to-fit, we relinquish some of our power.

It’s not easy to leave communities that offer us this sense of belonging and go wandering alone.

I know because 10 years ago, this is what I did. I left a yoga studio that I co-founded after only one year. I recognized that to stay would’ve meant accepting a direction that did not fit with my vision.

When I left, I didn’t just leave a business. I left a community. It hurt, and hurt, and hurt. But after a while, those empty places in me began to fill back up with the power that I’d relinquished, trying to make it work for far too long.

I learned then that our power is directly related to our sense of self-worth—the more we are in our power, the more confident we will feel about our choices and life path.

Inspired by this, I started calling my power back from more places and people who held it, some from long ago. For example, an old boss who I’d disappointed. A high school boyfriend who had the gall to tell me that while I was “generally pretty,” from there, it was about a boy’s personal preference. That comment repeated in the back of my mind for years, anytime I went on a date. So I took that power right the hell back.

Make a list. Get your nose on the job. Sniff out your power and take it back. No one else should still be holding on to it.

It’s easy to think about all the times our power has been taken from us or even the power we’ve bartered willingly. It takes a bit more courage to look at how often we’ve stolen power from others.

We do it when we take people’s time that wasn’t freely given. We do it when we force children to bend to our will. We do it as yoga teachers, customers, healers, friends, and spouses. It’s not only people in high positions who play power games. We all do, to varying degrees.

Of course, it’s not always malicious. Often it’s not even intentional or conscious. We’re taking power from others because, on some level, we’re trying to make up for the power we’ve lost. It never actually works. Stealing power away from others is a temporary fix at best.

The truth is this: we cannot replace our lost power with power from others. It’s not ours, and thus we can’t activate it. It reminds me of the one kidney my mom has—it’s not hers, so she has to take all kinds of medications so her body won’t reject it. Sadly, her original kidneys gave out, utterly empty of power over years of giving it away too easily.

We need to address and rectify these imbalances. Perhaps apologies are due. Maybe it’s just a minor shift in our relationship as we learn how to respect one another’s sovereignty at a whole new level. Until we release the hold we have on other people’s power, our own power cannot find its way back to us.

So send that power back to whom it belongs. Setting others free to be empowered empowers us right back.

3. Trying to Earn it

Most of us are not fully empowered because we’re still waiting for someone else to permit us—through accolades, praise, or recognition—to become so. If this or that happens, we say to ourselves, then I’ll feel empowered. Then I’ll speak my truth. Then I’ll do the thing.

This belief that power must be earned is a great way to keep many otherwise outspoken, courageous, and confident people quiet, side-lined, and filled with self-doubt. It’s a brilliant way to control a population, if you think about it.

You don’t have to earn your power. You can’t earn power. The most you can do is pretend at it, which usually leads down a road of abusing power rather than using it.

We have things backward in our world: we give people positions of power and hope they’ll feel encouraged to make wise decisions. It doesn’t work because it’s not authentic power. It’s a false power, which is why they need regular refills from others, leading to the horrible abuses of power we see far too often.

When we really understand the nature of power, we will give leadership positions to already-empowered people. They would be much less likely to abuse their positions because their power is inherent, not borrowed or stolen.

I think we’ve forgotten just how powerful we can be. We underestimate just how much this world needs our voices and our presence. We stand back and let others take the roles meant for us.

No more. The world needs us all too much. Not just what’s left of us, but our whole, powerful selves.