Dolce Far Niente: The Sweetness of Doing Nothing. 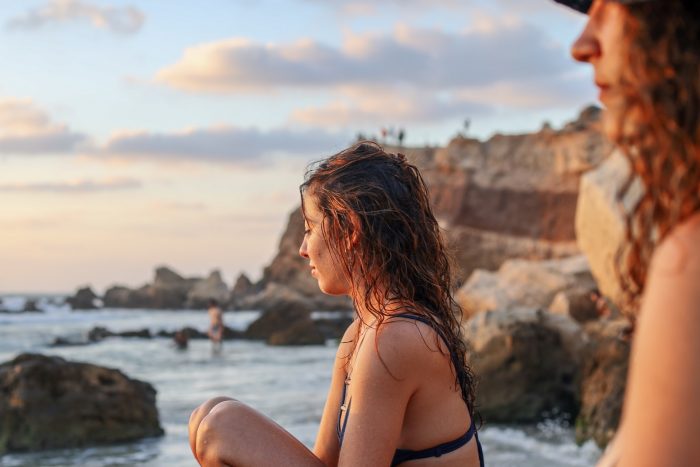 “Eat Pray Love” fans will remember the scene, but for those who have not seen the film or read the book, I will paint you a picture.

Our American heroine is sitting in an Italian barbershop talking to the locals about how she has done nothing productive since she arrived in Italy except learning a few words in Italian and eating.

She talks with a look of disdain toward herself for this and her delivery is edged with guilt—for not being more productive. A local man intervenes and proclaims that in Italy, you do not beat yourself up for this; in fact, it is celebrated—it’s a way of life.

They tell her that in Italy, it’s dubbed, “dolce far niente,” which is translated in English to “the sweetness of doing nothing.”

The sweetness of doing nothing has been anything but sweet for me historically. Doing nothing always resulted in: I’ll just do this chore or make that call or catch up on that email.

Doing nothing was seen as a negative; it was a wasted hour or a dirty little secret. It was waiting around, boredom at best, and boredom came from a lack of creativity (or so I was told as a child). Either way, doing nothing was not something that I purposely made time for. Doing nothing was to be lazy or to fail. Doing nothing had an undercurrent of guilt wrapped in shame, and it certainly wasn’t something I aspired to do.

So when in 2020 I found myself pretty much locked in my house 24/7, I was in a dilemma. Productivity was the only way forward. I cleaned; I painted; I organised; I wrote blogs and browsed courses; I watched films, read books, and FaceTimed everyone I knew. I was loading myself down with activities, doing anything possible to prevent the stagnant, crippling suggestion that I would be doing nothing. Doing nothing was a failure.

Until I had nothing to do.

And then something pretty f*cking amazing happened. Just like the barbershop trio explained to our American heroine in Rome, I discovered the sweetness of doing nothing—dolce far niente.

“The body benefits from movement, the mind benefits from stillness” is a quote from a Tibetan Lama and head of the Shambala Lineage, Sakyong Mipham. This quote resonates with me because what I discovered when I finally submitted to doing nothing was exactly how much I needed it.

Stillness and doing nothing are imperative for a healthy mind. We are as humans predisposed to try and shy away from it because, in this 24/7 world of overburdened, overworked, and burnt-out people, we have somehow attributed this state to success and the state of stillness to failure. Let’s be clear, any monetary or material gain from walking the tightrope of burnout is a failure—regardless of how nice our home is. I would rather be happy in my worn-out, years’-old boots than miserable in my Jimmy Choos.

It is not surprising that the Italian barber and the American businesswoman translated doing nothing so differently. Whilst the negativity around doing nothing I described earlier is societal, it is also deeply cultural.

It is also critically important for our brain’s health that we embrace doing nothing as an important piece of “personal development,” as it is crucial to us tapping into our creativity and intuition.

Albert Einstein has been widely quoted as saying, “The intuitive mind is a sacred gift and the rational mind is a faithful servant. We have created a society that honors the servant and has forgotten the gift.”

In a 2018 article published on CNBC.com, the correlation between some of the biggest leaders in business and their intuitive decision-making processes was examined further. Steve Jobs said, “Intuition is a very powerful thing, more powerful than intellect, in my opinion.” He attributed his success to his ability to tap into this powerful intuition, which is only made possible by doing nothing—through stillness.

Whilst Jobs chose mindful meditation to discover his internal intuitiveness and creep into his creative mind, it doesn’t have to be your way. A walk in nature, a seat in the garden, or simply sitting on your sofa quietly with your thoughts could achieve the same outcome. The principle is always based on doing nothing, whatever way that manifests to you.

Employers should be encouraging this stillness and affording us time to manifest our intuitive mind—because it pays dividends! Instead, we are plunged into a world of KPIs and piling workloads, unable to see the wood for the trees. Whilst it would be naive of me to suggest our work should have no conformed objectives or that financial targets aren’t needed to be met, maybe there needs to be a cultural shift.

Maybe, in forcing documentable and auditable productiveness, we are stifling creativity and losing our ability to work intuitively—and the end product is suffering as a consequence.

Is our burnout culture setting us up to be less productive? I think it is a self-fulfilling prophecy.

Just before sitting down to write this article, I sat and did absolutely nothing—a practice I have honed of late and one I now understand to be as important a pass-time as all the other tasks that make up my day. I could hear the birds singing outside, a faint siren in the distance, the whirring of the washing machine, and the ticking of the clock.

I didn’t force myself into productivity or distract myself with a menial task that had to be done. I didn’t have 1,000 emails screaming at me or the threat of a deadline hanging over my head. Instead, I acknowledged I had an article to write and embraced the space.

For just the right amount of time, I lost myself in the sounds of my surroundings, let my mind be still, and indulged the period of inactivity—the quiet space I afforded myself. Then, I concluded organically with the burst of creativity that inspired what you are reading now.