There’s Nothing Wrong With You. You are Enough.

There’s Nothing Wrong With You.

While you may think this is unique to you, that deep down fear you are not enough—not good enough, an imposter, or that there’s something wrong with you—is held by…well, almost everyone.

It plays in the background of everything we do, often causing us to self-sabotage what we want the most.

Some people react to this fear by judging themselves, hiding, making excuses, and engaging in negative self-talk. Other people do everything they can to prove that they are good enough, smart enough, even perfect, yet whatever they do is never enough. Still, others try to get assurance from other people. Whether that other person gives the assurance or not, for some reason it never sinks in.

Is it possible that this fear you have been holding onto for as long as you can remember is just a story? If you are like most people, letting go of your story is one of the hardest things to do. The reason why is because it doesn’t feel like a story to you. It feels real.

Are you willing to entertain the idea that it is just a story? And if so, if there was a way for you to discover the root cause of that story and release it, would that be something that you would be willing to do so that you could see, know, and feel the truth about yourself?

If there was a quick fix to seeing your truth and feeling good about yourself, don’t you think you would have found it already?

I’m not different from you. From the outside looking in, I was a self-assured, confident woman. I attended university, then law school, and then received a master’s degree in Tax Law. I worked in a large law firm as a tax attorney. I married and had two children and a dog. On the inside though, I was judging myself, hiding, and staying small.

It was painful. I didn’t want to continue to feel this way. I was determined to feel better about myself. I went to therapy, took medication, read self-help books, did affirmations, and prayed. It didn’t matter what I did—I still carried those feelings.

I continued to seek: there must be a way. I wasn’t willing to give up. Thankfully, that’s not my nature. I’m a solution-finder, and I was determined to find the solution.

It wasn’t until I discovered and studied the significance our thoughts, fears, and traumas have on our ability to see the truth about ourselves, I was able to see there was a light at the end of my journey. It took 10 more years of studying and testing out different methods. Finally, I understood why we feel this way about ourselves and what we can do about it.

I became acutely aware that there was no quick fix. If that disappoints you, I invite you to lean into your disappointment. I’d rather have a solution that requires time and effort than stay in the same uncomfortable state forever. How about you?

Here’s the Cliff Notes version of what I know:

Your story that you are not enough, not good enough, an imposter, or that there’s something wrong with you is made of limiting beliefs born out of an experience that seemed to threaten your survival, whether it actually did or not. Have you ever tried to address your limiting beliefs with rational thoughts or conversations? It doesn’t work because these beliefs aren’t rational. Ignoring them or forcing your way through them isn’t effective either because the beliefs just come back to haunt you. When those methods fail, you end up chastising yourself, which ends up feeding into the limiting belief.

The truth is there’s nothing wrong with you.

The limiting belief you are holding onto is the result of a filing system that needs an update. What I mean by that is that each one of us has a powerful subconscious memory bank that’s storing memories from our past, our ancestors’ past, the group consciousness, events we’ve observed, read about, or watched. This memory bank’s purpose is to keep us alive, and there’s no mechanism to filter out outdated memories or memories that are out of context.

The only way I’ve found to successfully address this outdated memory bank is to use effective tools that not only get to the root cause buried deep in your subconscious memory bank but also release the beliefs along with an action plan. The best way I’ve found to do this includes a combination of energy work, wiser solutions, specific and focused action steps, and appropriate support.

In my experience, people who are open to learning new tools that may at first glance seem too woo, seem too hard, or take too long, can be free of these limiting beliefs forever.

You’ve got to start somewhere, right? Staying in the same place, using tools that aren’t working, or looking for a quick fix is going to give you more of the same.

My mission is to show people another way. Sometimes it’s frustrating because the hold that your story has on you is so strong. I promise you, it’s just a story.

I invite you to lean into whether you are willing to explore something different that may require you to be open to another way, stay consistent, and trust in a new process. 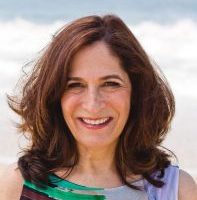