“People always treat him like he’s a weapon.” And Now, He’s Dead. 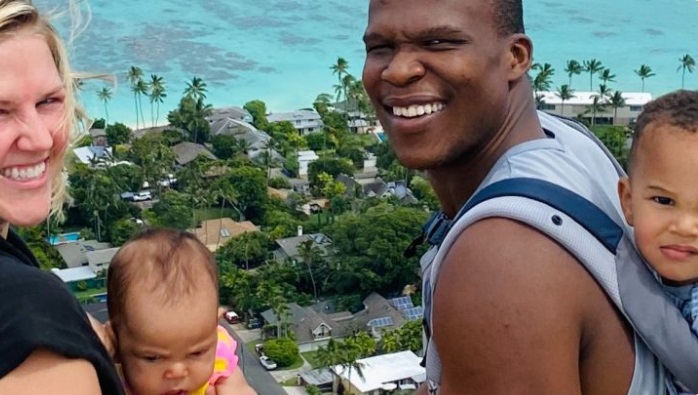 He was born and raised in eSikhaleni, a township in northern KwaZulu-Natal, South Africa. He was a mechanical engineer and a talented rugby player, described by his friends and former coaches as “focused”, “a good man,” and a “gentle giant.”

He lived in Honolulu, Hawaii with his wife, Lindsay (a United States citizen), and their two children, both under two years old. They had relocated there after Lindsay’s South African visa had expired. His green card interview was coming up.

But, on the evening of April 14th, five houses away from where he lived, he was shot dead by the police.

They shot my king ?
I was with him at 7:30p.
He went for a drive to clear his mind after a fun family day. His green…

There has been almost no media coverage around his murder—not outside of South Africa, anyway.

This is one of the few U.S. reports that I could find:

Are we just becoming numb to this stuff now?

Maybe it’s because he was just an African—not even an “African-American.” Maybe it’s because the “one-sided” police reports and limited bodycam footage released make it look like a case of burglary and self-defense—but Lindani had no criminal record and no weapon. Maybe there’s more to this tragedy than meets the eye.

“He was Black and they were scared.”

I can’t believe I’m writing this. My brother was murdered. Lindani Myeni was shot four times by Police Officers after…

“Myeni’s grandmother, Ntombi Xaba, said that in the letter the couple said racism was rife in the U.S. and it was not easy for Myeni to be married to a white woman, and his neighbours did not like him. ‘He was killed five houses from where he lives and they (neighbours) see him every day. We are certain that he was killed because he is black.'”

As a White, South African woman, I know that this is a difficult and complicated conversation to have—but we need to have it. We cannot afford to avoid it.

Derek Chauvin’s conviction was not justice; it was individual accountability. It was not a victory; it was one small step toward change. This problem is not individuals; this problem is societal. It is systemic. The policing system continues to function as it was designed: to treat Black and Brown bodies as a threat, first and foremost, while preserving and protecting White ones.

In Columbus Ohio, as the Chauvin verdict was being read, the same deep-rooted fear and dehumanization led to police killing 16-year-old Ma’Khia Bryant, after she called them for help. She. Called. Them. For. Help. And she was still not safe.

Without a doubt, Lindsay Myeni is right.

Every human being should be treated with the equal respect that every human life deserves. And this is not what is happening, or has ever happened when it comes to Black and Brown people.

In America, specifically, police violence is only a symptom of the deep-rooted systemic racism upon which the very fabric of American society was built. It will not be healed, it cannot be rebuilt until it is not only acknowledged but dismantled.

“So many times we have seen while male shooters, white men with knives, weapons, gently ushered away ALIVE, by police. And yet when it comes to Black and Brown folks, police shoot to kill. Police are doing exactly what they were created to do, to enforce white supremacy.” ~ Y.K. Hong

Until then, we need to think carefully about how these stories are being told, and by whom.

“Lindani’s story deserves to be told with honor and dignity and his tragic, unnecessary death deserves more attention. There are too many unanswered questions that HPD has not yet addressed.

What we do know:

· Lindani was unarmed in his own neighborhood when confronted by three armed cops
· HPD declined to comment on whether they displayed their sirens or lights
· The body cam clips released so far do not show flashing lights or sirens
· It was a dark moonless night
· The police did NOT announce themselves before confronting Lindani
· Officers approached Lindani aggressively, yelling and shining powerful Mag flashlights in his face
· Lindani was likely confused and responded instinctively, defending himself
· The entire confrontation happened in under one minute
· The police finally announced themselves AFTER they shot Lindani three times and killed him

The Myeni family deserve total transparency and full accountability from HPD to include releasing ALL:

This incident could have ended so differently. HPD should have announced themselves and given Lindani a chance to answer questions before resorting to excessive force.

Lindani’s name should not have ended up on yet another protest sign. This is a widespread systemic problem within the US police force which is interconnected with many other systemic problems. We need epic systemic transformation in order to prevent further unnecessary loss of life.

As Trevor Noah asks, where are the good apples? The whole tree is rotten, producing too many bad apples. It is time to plant new trees in life-enriching soil.”

“Accountability is the beginning of justice but it doesn’t guarantee justice. We are responsible for making progress now—real progress. I want to know my friends: what are you committed to doing about it? How are you going to be an ally?” ~ Shelly Tygielski

Ready to be an ally? Study up: