Stay when you’d Rather Run Away: A Buddhist tip for Living a Life with No Regrets. {Partner}

This article is created in partnership with Ana Verzone, host of the Rebel Buddhist podcast and spiritual mindset coach for freedom seekers. She is dedicated to giving us the tools we need to live our most adventurous and mindful lives. We’re honored to work with her. ~ ed.

I want to tell you about a time I made a lot of powerful, wealthy people extremely uncomfortable.

I was at a dinner—a super fancy dinner.

My boyfriend at the time had just received a job offer with a highly reputable group after a competitive interview process. This was where we were going to all come together and they were going to meet me, and we could all hang out jovially and celebrate.

Despite growing up poor and with dinnertime around the TV set, by the time I was at this dinner I’d had a decade-plus of practicing learning what to do with all those forks and spoons and how to make polite conversation with total strangers.

So, there we are at a loooong table, and I’m entertaining everyone in my vicinity. I’m in the middle of a story about an avalanche in the Himalayas when the “thing” happens.

In the background, I pick up something in a conversation that I’m not a part of, someone saying, “What are black people complaining about anyway? Slavery ended over 200 years ago. It’s not our fault anymore. It’s time to get over it.”

I stop mid-sentence with the person I’m chatting with. I turn around and say, “I’m sorry—what was that?”

“Oh, I was just saying I didn’t know why black people are still blaming slavery for all their issues when it ended 200 years ago, you know?” He was smiling. He was expecting me to smile back and agree.

There’s an uncomfortable silence…I turn my chair to face him fully. I pick up my glass of wine and take a large swig.

Ready to take back your power? Thought so.
Sign up for my Free Speak Out Masterclass, coming June 16th (& get instant access to my Resilience Training) >>

I take another sip of my wine along with a deep breath, smile, and wait for a response. Nothing—except for his smile disappearing and an awkward silence from the entire table, punctuated by a few uncomfortable laughs.

Like in hiring practices, school segregation, and residential segregation due to things like ‘white flight’ among other issues. So you see, it’s all very real and it’s totally happening right now.

So actually, why people are still blaming rich white men makes sense to me. But I can get how that might feel uncomfortable to think about.”

I smile and shoot him a welcoming vibe, like, “Here’s your chance. Open up and learn something new, dude. Admit what you said was not okay. Evolve, dammit.”

I try not to seem angry. But I’m confident, knowledgeable, and carry myself in such a way that it’s clear I can take on any kind of argument with grace. Maybe not as much grace as the notorious RBG would have, but at least my own version.

I’ve learned many people don’t open up their minds when they feel attacked. I’m not saying there isn’t a place for outright flame throwing (been there and done that when it makes a difference). But I’ve also learned over the years that many people are more willing to listen when they aren’t feeling under fire. When we open with giving them the benefit of the doubt.

And while impact matters more than intent, so many people are not trying to be assholes. So I try to educate—before throwing flames.

He takes a deep breath.

“Well, Ana…thank you for letting me know. I didn’t think about that part. It’s always nice to learn something new. I’m sorry if that offended you.”

How polite. How…uneventful. How…lacking in curiosity about how to evolve.

I reply, “I understand. It can be hard to remember that it’s the ‘land of the free’ for only a select few, especially when you are the one with all the freedom. But hopefully it’ll be easier to remember now. I know you’re a good guy and will do the right thing.”

Wanna learn how to speak your truth in tough moments?
Sign up for my upcoming Free Masterclass >>

I don’t know if he shifted his actual beliefs as a result of what I said—or if he even meant what he said—but I do know that at least I could sleep better that night. I acted with integrity. I also gave another human the benefit of the doubt. I was in alignment with my values, inside and out.

It’s one of the reasons why I do the work I do—to help others live a life without regrets, a life of true freedom. And that takes confidence. Courage. Vulnerability. Compassion (including toward ourselves and those we disagree with).

It takes being able to hold our ground when challenged, undermined, or harassed. It takes overcoming our culturally-conditioned default to freeze—to go silent, to shut down.

It takes being willing to disappoint others if it means not disappointing yourself.

And it was then that I knew…he wasn’t my person.

Alignment. Inside and out.

Who are you willing to disappoint so you can honor your truth? Suggestion: anyone.

Let’s get real, though. All of this, especially as women, does not come easily. Why? Because we’re conditioned to be good girls, right? And what do good girls do? They don’t upset the status quo. They don’t create a scene. They don’t speak their peace. They keep the peace instead, even if that means losing their own.

So, I’m not here to make you feel bad about the times when you didn’t speak up, or make a scene, or upset the status quo, when you really wanted to. Shutting down is not a weakness—it’s a stress response caused by millennia of cultural conditioning.

Living a life without regret takes practice, skills, and commitment. And especially for women, it also takes retraining our brain.

Which is exactly why I’ve created a free masterclass specifically to help rebel women retrain the conditioned stress response that keeps us from accessing our voice, truth, and power.

I want to train you to be one boss-ass rebel woman who’s sure as hell gonna change the world (mindfully).

Do you shut down when someone gets verbally aggressive or inappropriate with you?
Learn 5 simple, practical steps to apply in triggering situations >>

I also want to encourage us all—when we find ourselves triggered and just want the other person to believe different things or to go away or just be quiet—to ask ourselves:

“Why is this causing so much suffering? Why do we want them to just be silent?”

And it’s really important that we answer those questions. Because taking back our power, reclaiming our voice, standing up for what’s right is not about reversing the dynamic and becoming the loud, aggressive bully ourselves.

I love telling the story of how Ram Dass had a picture of Trump on his altar and he said he would pray for him and love him and say, “I see you for your soul. Not your karma.” Then he laughed and said, “Boy…and does he have some karma!”

As usual, there is a Middle Way.

We can have differing opinions from someone and love them. We can take action to claim our space and change the world from a place of love, not hate.

But if we want to tap into that power, we have to learn to stay when we’d rather run away, to play when we don’t know what to say.

Take back the power that was always yours. Reclaim your voice. Use it to create a better world. 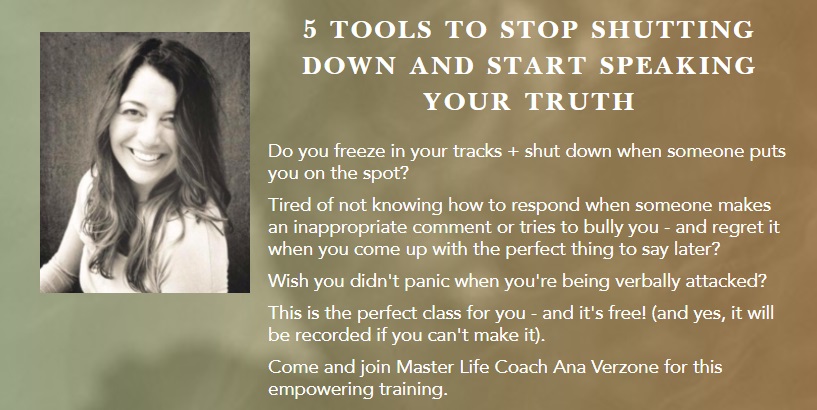 If you want to join a squad of people that will help you navigate this wild and precious life, my free training will give you a taste of Freedom School, my online learning community for rebels like you. It’s not just personal growth—it’s Jedi training for the new world. 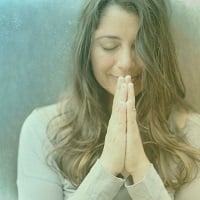 Ana Verzone is a spiritual mindset coach for rebel women who want the most out of life without dulling the sparkle of their wild souls. Host of the Rebel Buddhist podcast and … Read full bio