What happens when we Continually do what we “Should” over what we Want. 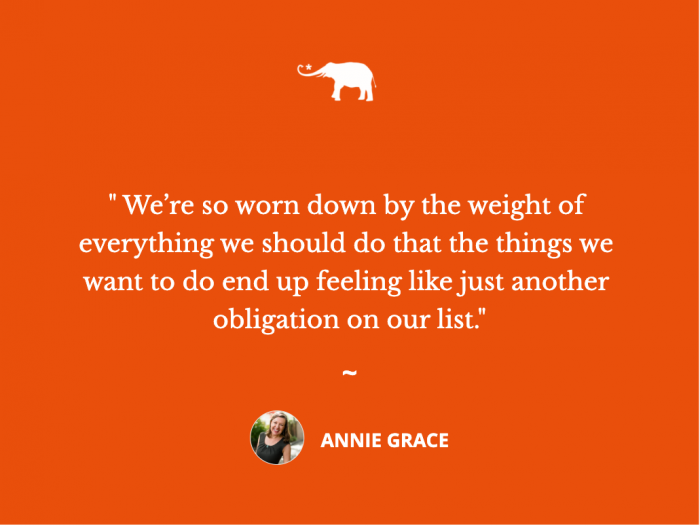 I have easily spent 95 percent of my life doing what I should.

Doing things out of a sense of obligation or responsibility without giving much thought as to whether those things brought me personal satisfaction.

Personally and professionally, I’ve been known to be dependable. If you need help with anything at all— just ask Annie!

In my corporate years, I said yes. Yes to happy hours. Yes to traveling for months at a time. Yes to the project, the presentation. Yes to the client.

At home, I also went above and beyond. Yes to the home projects. The volunteer duties. The sports activities. To the errands. To the chores.

Saying yes followed me into my new career as well. Every single time someone said, “You ‘should’ do this,” I did. Entire programs were developed from shoulds.

I don’t know where it started, but long ago I stopped paying attention to my wants and prioritized the “shoulds.”

Do you know what happens when we continually put the shoulds ahead of the wants?

We walk around perpetually drained. Even when we get around to our wants, they don’t bring us the fulfillment and joy we were expecting to get from them. We’re so worn down by the weight of everything we should do that the things we want to do end up feeling like just another obligation on our list.

When I think of all the things I have done over the years just because I felt that I should, my head spins. I started drinking daily because a boss told me I should. That sounds ludicrous even to me. I didn’t want to drink. I was quite happy without it, but I was told I should in order to advance my career. The deals happen at the bar!

I should take that promotion even though I had already figured out I wasn’t really a city dweller. Living in Brooklyn left me longing for the secluded mountain top cabin from my childhood in Colorado. Yet, I took the promotion that sent me to London because it was the right thing to do.

Time after time, year after year, I kept doing what I should. I’m not saying none of it brought me joy and happiness, but it always felt like my tank was never full. I was that person rolling up to the gas tank running on fumes. Each time I was just adding enough fuel from my “wants” pump to make it home. The low fuel light kept flashing and I kept ignoring it.

After I shared this realization with a mentor of mine, he challenged me to keep a list of all the activities I do—personally and professionally—and whether they fuel me or drain me. The goal was to have 80 percent of my time spent fueling myself, not draining myself.

That meant every time the “I should do that” thought popped into my head, I needed to analyze which category the action would fall into.

The first time I went through the exercise, my chart was 90/10…in the wrong direction.

Here I was, preaching self-love, self-compassion, awareness, and grace, and I was still holding on to the bad habits and beliefs that had kept me drinking for years. Did it matter that I was no longer drinking if I was still dragging myself down in other ways?

Yes, it did. Had I still been drinking and practicing all the negative self-talk, guilt, and shame that went with it, I probably would have poured a glass, spent an hour beating myself up, and decided there was nothing I could do to change my situation.

Avoidance was my coping mechanism back then. Not anymore.

Awareness is now my superpower. If doing what we want fuels us, it makes sense that not only will we be happier by eliminating most of the shoulds, but we’ll also be more productive and make a more profound impact in our jobs, our personal lives, and in our communities.

It’s not about shirking our duties—it’s about maximizing our talents. When we do things only from a sense of obligation, we don’t get the same impact as when we do it from a place of passion.

There will always be some unavoidable shoulds; that’s a given, but they don’t need to dictate the majority of our lives.

Now that I had the awareness that my energy was being used on the wrong thing, I could do something about it. It took me almost a year, but I can now say that I’ve replaced doing what I should with doing what I want.

I still keep that list beside me and consider it before I commit to anything. Am I the person for that job? Am I signing myself or my kid up for an activity because we want to do it or because I think they or I should do it?

Simple questions, but they have profoundly changed my life, my happiness, and my contributions to the world.

What would your list look like? Are you living life in your “shoulds” or energized by your wants?

For more from Annie: