How Unresolved, Unmetabolized Trauma passes to the Next Generation.

I was a spiritual seeker for 30 years.

And then Consciousness took me seriously; it started to seek me.

Three years after my world was turned on its axis, I can now see I was looking for a way out of trauma. I didn’t know my parents had unresolved, unmetabolized trauma. As a society, we haven’t been taught how to identify trauma—what it looks like and how it shows up in everyday interactions between humans.

Trauma is normalized: “that’s just how they are.”

I was looking for a way out of one painful relationship after another, feeling unworthy, undeserving of love, respect, of being honored or cherished. I didn’t have a sense of my worth; my value was based on the relationship I was in at the time. There was only a me if there was someone to reflect my image. I didn’t know then it was an ancestral pattern—ancestral trauma in my maternal line.

Unresolved, unmetabolized ancestral trauma passes to the next generation.

Now I see I was looking for a way out of life, not seeking to be in life.

Mooji, the spiritual teacher, speaks of being the cow who jumps over the moon. (I now know a fellow spiritual bypasser when I hear one.) I wanted to jump over my pain, jump over life challenges, jump over the work I was born to do on behalf of my lineage.

I wanted a way out—not in.

And it’s understandable, right? Our lizard brain, our survival brain, seeks safety first. It’s not interested in genuine enlightenment that comes from the resiliency of walking into the fire.

I don’t believe there’s a human walking on Earth who has not experienced personal, ancestral, or collective trauma because racism and toxic patriarchy is global, brothers and sisters! So, when you have experienced trauma (the trauma of racial battle fatigue is daily for people of color), your trauma responses are heightened and not often disengaged. Your system is not often settled or peaceful.

You need to have a practice (and often) to return your system to a state it has rarely known, even before birth. Remember, we carry the trauma of our mothers—our mother’s mother, and on it goes. We carry the genetic information of the trauma they experienced and survived but rarely healed in their lifetime.

Resmaa Menakem, in his book My Grandmother’s Hands, says trauma has “decontextualized.” It has lost the context because the trauma wasn’t acknowledged or understood as a traumatic moment at the time it occurred. In an individual, it looks like personality; in a family, it looks like a family trend; in a society, it looks like culture.

I was a woman who was easily agitated, easily frustrated, easily triggered to anger. I lived with a sense that “the light at the end of the tunnel” may be a train coming at me. I lived with the sense that something bad could happen at any moment—I had to be prepared. I felt I needed to be at the ready at all times, and it was all on me to figure out. I lived not wanting to celebrate the good times too much for fear it would bring misfortune.

Because I lived in a state of emotional shutdown since childhood, I avoided conflict. I avoided being in any situation that would make me feel vulnerable—vulnerability was equivalent to weakness. Having never known what it felt like to be vulnerable and supported, all emotional vulnerability was to be avoided, or I would experience more wounding, my lizard brain said.

That’s who I was when I had my son at 32. I had wanted, dreamed, and researched motherhood, planning how I would be a “good” mother from the time I was 16. I was calling for someone to love, someone who would be safe to love who would love me in return.

But I didn’t know about trauma, and that trauma was the reason I wanted a baby at 16 years young. I didn’t understand how trauma had impacted me in such a way that what looked like my personality was actually a trauma survival response. And that because of my trauma, I became an anxious, easily triggered, sometimes rageful mother to my son. (Not the mother I had planned or wanted to be.)

My unacknowledged, unmetabolized trauma was passed onto my son.

Trauma and its effects do not stop until they’re addressed. Until it is metabolized. Until we take responsibility for our growth, our healing. Until we walk through the fire.

When my world turned on its axis—when Consciousness (after years of me running after it to jump over my suffering) came gunning for me, it exposed all my fears, all my conditioning, and, blessedly, all my unresolved, unacknowledged, unmetabolized trauma.

Our trauma is waiting to alchemize into resiliency, into wisdom, into an embodied, accountable spiritual path. 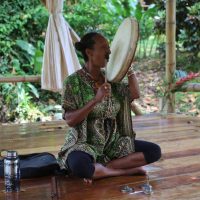 Ann-Lee Waite’s spiritual name is Bajra. She’s an Afro-Caribbean woman who is awakening not only spiritually but also as a woman of African origins living on plane… Read full bio