The Fate of Persephone: why we Suppress our Juiciest Creative Desires.

There’s an ancient tale from Greek mythology of a young girl named Persephone.

Her father, Zeus, was the chief ruler of the sky; her mother, Demeter, ruled the Earth’s harvest and fertility.

The story goes that Persephone was kidnapped one afternoon while she stood admiring the flowers. Her abductor, Hades, god of the underworld, found himself entranced by Persephone’s beauty, her youthfulness, her femininity.

He craved her creativity. He wanted it all for himself.

Of course, Persephone’s mother couldn’t recover from the loss. She decided that until her daughter was returned, she would relinquish her goddess duties. Demeter halted the harvests; she watched the Earth harden and dry. All the plants gasped for nutrients; all the animals grew weak from starvation.

Zeus knew he’d have to get Persephone back fast, or everything on Earth would perish.

Zeus bargained with Hades, insisting their daughter be returned. And finally, Hades agreed—on one condition. If Persephone hadn’t yet tasted the sweet pomegranate seeds found so plentifully in the underworld, she could go. If she had, she would be doomed to come back to him for half of each year.

Some say Persephone knew of the agreement and ate the seeds anyway, attempting to trick her captor. Some say Hades knew she’d had them already. There are many versions of the myth; the details have varied and disappeared in each culture and generation’s retelling. In every variation, however, Persephone tastes the seeds.

The word enthusiasm, now defined as “zest or fervor,” is derived from the Greek root word, entheos, meaning “inspiration or possession by God.”

However, in the 1650s, under Puritanical constraints, the meaning of the word gained a negative connotation, an equivocal meaning to “excess” which was, during this era, parallel to immorality. Enthusiastic was even used to describe a person who thought they were receiving “special revelations from God,” revelations ungranted to others—and always perceived as ridiculous and untrue.

It makes more sense, hearing parables and entomology such as these, that aspects of society or religion attempt to lead us astray from our desire—and in turn, our natural, creative instincts.

There’s an intensity around desire. It implies a passion that stirs fear in those who don’t know what to do with such wanting, who don’t feel they’re allowed to employ such inventive, artistic ideas to their stories—lest they be condemned to the underworld for the rest of their lives.

The saddest part of the Greek myth is that there’s no version where Persephone is let off the hook for eating the seeds.

There’s no Eve who receives mercy for the tempting nectar of the apple either, is there? There’s no forgiveness—worse, no celebration—for their desire for sweetness, their attempts to change the narrative laid out for them.

Instead, their creativity leaves them punished.

No wonder we’re instructed to stick to the traditional trajectory—go to school, find a job that provides stability, work until retirement. No wonder there is so much spiritual warning around attachment and wanting, around our will versus what’s “righteous.”

But what if our wanting is the way? What if our desires are God-given? What if we still, now, always have a chance to employ our creative longings and change the way our story ends?

What is creativity but the capacity to bring our dreamland to our waking life, wrapping the rest of the world up within it the way Demeter used her gifts to grant us fertile ground?

Creativity captures; it inspires. Its flowers blossom and celebrate—open themselves toward God. When the productivity machine, the “shoulds” and “should-nots” of the modern world bog us down, where do we turn?

Stories are just that—stories. It is creativity that transforms them, changes cultures, unlocks a brand-new way.

So, what will you do with your possibility, with your blessed, fruitful ground? Do you believe in a world where enthusiasm for your life and your creative work is waiting for you?

I do. I believe in a world where we are all “special enough” to receive revelations straight from God, visions that direct us toward our desires, like our own personal missions to bring heaven down to Earth.

I believe in a world where we reclaim Persephone’s story…

Where, this time, she eats each and every pomegranate seed, tells Hades she’s out with a flip of her hair, and he is so stunned by her audacity, by the sweet, sticky, red juice dripping from her chin, that he opens the gates and she is free—to do and be and create however she pleases.

May we discover our innate creative way. May we use our uniqueness and imagination to craft a new world. May we live inspired and fully self-expressed. ~ Lizz

Wade deeper into your creative soul: 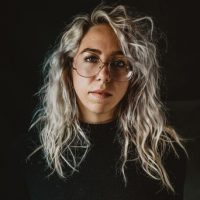 Lizz Dawson is a writer, seeker, lover, traveler, & rebel mystic devoted to truth and liberation. Both story and storyteller. Connect with her on Instagram or visit her we… Read full bio