2 Different (but Effective) Ways to Build our Self-Worth.

If you are anything like me (or who I was about two years ago) and have forgotten what self-worth is, let me remind you.

It is a healthy sense of your own value as a person.

And this sense gets a lot of pushback from every side starting from early childhood on, leaving our self-worth as an almost unnoticeable and unhelpful leftover.

Until one day we recognize it again, the hard way, obviously, and take our time to rebuild it and uncover it, layer by layer, from all this bull that made us believe we are unworthy and could be treated like sh*t.

And unfortunately, we have to also point the finger at ourselves, because if we have a low sense of self-worth, it’s not only other people treating us poorly, it’s ourselves too.

But becoming aware of all this is luckily the first step in the right direction.

Our self-worth plays an important role when it comes to all kinds of situations and all kinds of relationships (family, friends, love, jobs). It includes the one that we have with ourselves, which is the most important one.

If we have a strong and healthy sense of self-worth, we also have better boundaries, better relationships, and a much better life.

Teal Swan spoke in a YouTube video about self-worth and shared a valuable story that has stuck in my mind ever since. The story was about a horse who feels really bad about himself.

This horse lives with a car dealer who loves cars and making lots of money. He loves speed, so he needs something that can go over a hundred miles an hour. The horse watches him wipe the cars lovingly for hours.

The horse decides that he doesn’t have value. He is worthless. But is that actually true?

One day, the horse ends up being driven in a trailer to a farm. He thinks he is being given away by the car dealer because he has no value. However, when he gets out of the trailer, he sees a man standing there with a huge smile, excited to see him.

His new owner spends hours brushing his coat. He overhears him bragging about how perfect he is. He needs a horse that can soar over a series of jumps on, which is something a car could never do. Suddenly the horse realizes that there is someone to value everything in this world.

It is simply a matter of being in the right place with the right person who will recognize the needs that you are designed to meet.

The simplicity of this story and how much it’s on-point really spoke to me. Because—oh boy—years ago, I watched videos about the same topic and it never reached my deeper consciousness.

We are all worthy and deserving of love and respect and should just start believing it.

If it was that easy, why do lots of people still struggle with it? Old patterns are oftentimes hard to change.

After spending years of thinking about how unworthy we are (and working kind of hard to find lots of justifications for this belief), we cannot, all of a sudden, believe that we are worthy.

Our inner voice may go, Ahh, what are you talking about? And we are like, You’re right, forget it.

For this to change, we have to bite the bullet do the work. It sure can be exhausting, however, it surely pays off.

We have to take a deeper look at our belief system, question our limiting deep-seated beliefs, and alter them for the better. And it’s something we all should do (at some point) if we become aware of it.

But, sometimes, we aren’t ready to take on that kind of mind route. There is an angle we are likely to forget.

We can also rebuild our self-worth by way of the action route. Through thinking, over time, we will adjust our behavior. But there isn’t only one way. This also works the other way around.

If we are not quite there yet in our mind, we are still in charge of our actions. Actions require only decision-making. Act as if you believed you were worthy.

Without having to think too much about it or without digging too deep, we can take your power back and take action.

As soon as we realize that we have to ingratiate ourselves with someone (or be intrusive) in order to be seen, valued, or appreciated, we can choose to get the f*ck out. We can remove ourselves from the situation or the relationship because we have the power to do so.

We can say or think to ourselves, Thank you for showing me that I don’t have to be here because I don’t belong in a place or with a person who doesn’t see my worth. They either see it or they don’t, and we all should act accordingly.

The great thing about taking the action route is that, over time, we make new experiences and learn by doing,

We learn how worthy we truly are and create healthier beliefs that result in clearer boundaries and a happier life. So, have fun on the action route, you beautiful creature.

Don’t stick around to persuade anyone of your self-worth. 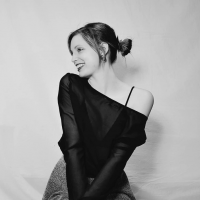 Janine Friedrich is a passionate writer and poet from Germany, who lives in Switzerland. She has a lot to tell. In her articles she writes about her own experiences and intere… Read full bio