How to Say, “I Love You” Without Words. 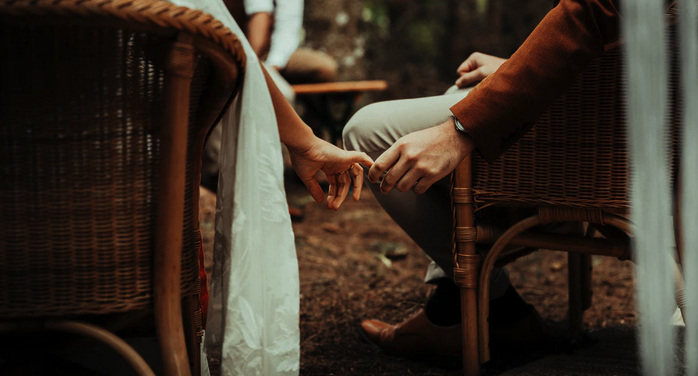 If you asked me what love language Alan and I speak, I would explain that it’s about making what’s important to your “someone else” important to you and appreciating the intention behind the gesture.

About 18 months ago, I was diagnosed with Microcystic Adnexal Carcinoma: a rare, malignant tumor, commonly classified as a low-grade sweat gland carcinoma that typically occurs on the head and neck, particularly the central face. It is aggressive but rarely spreads.

This news came as a result of pathology results on a nagging cyst I had removed under my lip. As soon as it was gone, so was any energy I may have had about it. I didn’t give it another thought.

Much like an earthquake, it arrived with no warning and followed with all kinds of aftershocks.

It truly shook us to our core, and in many ways, our world cracked open. Shortly after, Alan started kissing me on the forehead before he left for the hospital at 5:30 in the morning. What I loved most about this was that he started doing it, knowing I was asleep. It was for him, and somewhere along the way, it became a ritual for me. In a daze, I would smile and fall back to sleep.

He was my Prince Charming during the cancer chapter, and it was cathartic.

I struggled a few years earlier, and Alan did not offer the same tenderness. He just didn’t know how. That hurt. So every morning, he reminds me that he is here, that he is a better man, and he is going to show up for me, forever.

All that is spoken with a simple kiss on the forehead.

A few weeks later, on a Sunday afternoon, I could hear Alan from the den, voicing his doom-and-gloom at the mere idea of facing the pile of trash that was awaiting him. I decided I would surprise him. I could take this one thing off his “to do” list.

It would be a love note from me to him that said, “You work hard. Let me do this for you.”

This was no small undertaking. We had just moved back into our newly renovated space, and it was stark. We were transforming our empty nest into a love nest; it was out with the old and in with the new. We literally gave away every single thing from our home and started over.

Every new piece of furniture came in a box: every lamp, every rug, every plate, every bowl. Once emptied, boxes had to be flattened, peanuts gathered and put in the garbage can, and all packaging separated into its appropriate receptacle for removal. It was a production. Once that happened, recycle bins had to be dragged to the curb along with all the boxes. Finally, the garbage pail, which felt like it had been filled with rocks, had to be wheeled to the curb. This whole process took time, and the temperature in the garage felt similar to that of an oven baking a batch of Cathy’s Cookies.

When he finally mustered up the courage to head out to the garage and take on the monumental task he’d been so dreading, he was greeted with the sweetest surprise, nothing. I could all but see the expression on his face just by listening to the sheer joy in his voice. My kindness was received exactly as it was intended. I said nothing; his reaction said everything. I continue to get such a kick out of his gratitude that I have handled his one household chore, my treat, for a few weeks now. We have clear-cut departments: his is work, mine is house.

Somehow, every single week, by the time Sunday rolls around, he has no recollection of the good deed offered a short week ago. Think “Fifty First Dates.” I won’t assume this responsibility permanently because I believe it is important for us both to invest energy and take ownership in the maintenance of our home. It’s much the same way in parenting.

The magic is in the “doing for,” rather than keeping score, with someone else in mind. On Father’s Day, I wrapped his present in beautiful craft paper, tied a gingham ribbon around the box, and tucked a stem of candy cherries under the bow. I do that because I love to, and over the years, it has become my signature. If I was really thinking about what he wanted, I’d have handed him an unwrapped box in a bag; but you and I both know that is never going to happen. The cherry on top is my kiss on the forehead.

On the flip side, lately, when I go on a Publix run, Alan offers to join me. Does he really want to go grocery shopping? Highly doubtful, but he knows how much I appreciate his participation. Just like in yoga, sometimes the hardest part is showing up, and he shows up for me. Having him chauffeur me turns a chore into a play date. We talk about what the week ahead entails as we pick the food we’ll eat. He mentions a late night that he won’t make dinner, and I tell him about a six o’clock yoga class I have on my calendar—dinner will be EMFH (every man for himself). That one hour sharing a task serves the same purpose as a candlelit dinner for two would; it’s just about connection.

We all need to practice speaking our love language in the world—more kindness, less judgement, more tolerance, less intolerance. Forget “my way or the highway” and embrace “live and let live.”

You get to choose what you say through your actions, as well as your words. When you speak with your heart, nobody needs to translate; everyone understands.

It is in the celebration of genuine giving when we feel more love than we think our heart can hold. Live your love without expecting anything in return. It is next-level giving. And what comes back to you is karma’s way of kissing you on the forehead.