Dear Men, Stop Defining your Strength based on your Biceps.

Do my biceps look big in this? Or is a different kind of male strength more important now?

We say that a man needs to “grow a pair” (of testicles, naturally) when we think he needs to be braver or more assertive. Then we turn around and call something “a load of balls” when we want to say how useless it is. And we insult a man by likening him to our favourite body part—surely being called a “dick” should be a great compliment?

This probably reflects an ambivalence we feel about everything sexual. Our leftover prudery makes us think of sex and the parts of our body we use to do it as something bad or dirty.

In any case, it seems that having bigger balls would be unlikely to make you braver than any other man (or woman). The testosterone they produce does stimulate muscle growth and makes any animal more predisposed to use aggression when it’s necessary for survival, but it’s not responsible for violent behaviour.

The “macho” view of bravery, which assumes that the use of violence is a way to solve interpersonal problems or gain power, has more to do with the social conditioning (that tells a man he has the right—and even an obligation—to flex his literal or metaphorical muscles to get what he wants) than hormones.

And the idea that men are “strong” whereas women are “weak” is one of the more ridiculous gender stereotypes still floating around, especially in countries where women do most of the physical work, not to mention being solely responsible for the incredible (to us males) feat of childbirth and raising kids.

But like with a penis, it’s not the size of our muscles that matter; it’s what we choose to do with them. And in any case, physical strength is the easiest to grow; all it takes is repetitive exercise that challenges the muscles we want to develop.

Emotional strength is much harder to acquire and much more important.

I’ve realized that it comes from being completely honest with myself and anyone close to me about how I feel, what I want, and what I need. There’s always the risk of being shunned or refused, but at least, by accepting myself as I am and being honest about that, I can feel at ease with myself and able to look the world, and the people in it, in the eye. 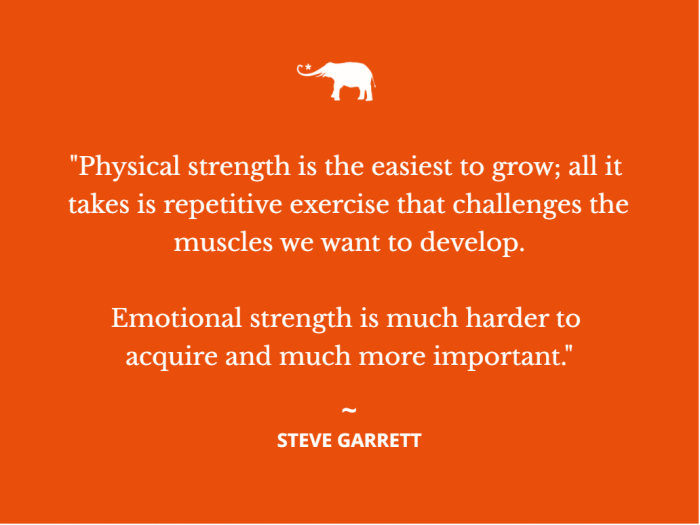 Strength is often confused with power, which is something else altogether.

Power usually involves coercing others into doing what you want by instilling fear. Paradoxically, power is a cover-up for weakness and is a kind of cowardice in the sense that it depends on getting compliance by threatening vulnerable people. Empowerment, on the other hand, is about enabling other people to feel more confident, and it is the greatest strength of all. Bullies may have power for a while, but they will never be loved and respected like people who support others.

Tragically, we (men) have been socialised to believe that having emotions—or any kind of mental health problem—is a weakness and something to be ashamed of. So we carry on, pretending we’re okay and not seeking out the help we need, while behind the mask, everything is getting worse.

And we never know how many other men are feeling the same as us because they’re all hiding it as well. This may explain why suicide is the main cause of death for younger me. Fortunately, these attitudes are changing for the better as more high-profile male role models admit to the emotional issues they’ve struggled with.

I live in Cardiff, the capital city of Wales.

During the industrial revolution, the coal that was mined in the valleys, radiating northwards from the city, was exported all over the world. Wales was the Saudi Arabia of its time, in terms of supplying energy. It all ended due to a combination of cheaper coal being imported from other countries and a right-wing government under Margaret Thatcher that feared the power of the miners’ unions—and which systematically closed all the pits in South Wales.

The men who lived and worked in the mining areas had a strong sense of community and pride in their work, much of which was underground and needed a combination of physical strength and courage.

Now, those towns are desolate, and young men go to the gym to grow the muscles they’ll never use for anything productive, often using their fists to gain a fleeting sense of self-respect.

A different kind of male strength is needed now in this post-industrial world, which is about living with integrity.

Being courageous and principled.

Being tender and caring.

Doing what feels right without needing other people’s approval.

Being ready to support and serve others who need us.

Having a determination to confront all types of oppression.

Physical strength is no longer of much use from an evolutionary perspective, thanks to the array of tools at our disposal; the old ideal of masculinity, which sees every man (and nature) as a potential competitor, no longer has a place in the modern world.

The fact is that if more men don’t abandon these obsolete beliefs and behaviours, our species has little chance of survival because armed conflict and destroying nature will finish us off, sooner or later.

It means that many of us still need to grow a pair…of ears!