From Infatuated to Nauseated: What is Sudden Repulsion Syndrome? 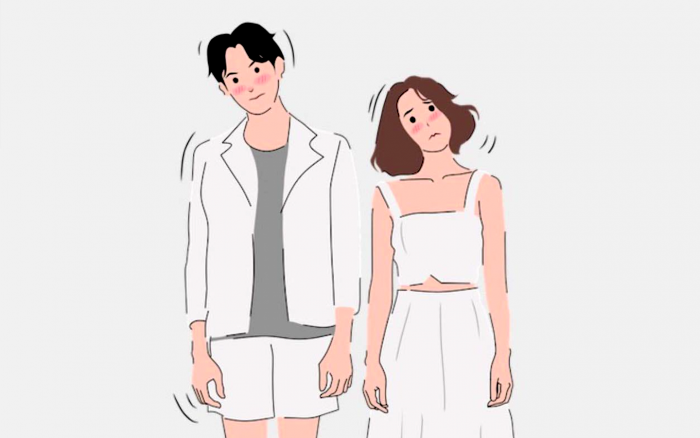 I have had my heart broken more times than I can count.

But, like many people, some things have ended so badly that they’ve left indelible marks.

Several years ago, I fell for someone who lived in a neighboring state, quite a few hours away. It was fine because we’d talk on the phone every night and write little messages throughout the day.

Whenever I needed a shot of love endorphins, I’d open Facebook and stare longingly at her filtered and curated photographs (the usual idiotic behavior of a single man in the 21st century).

One night as the weekend approached, she explained that her date for Saturday was cancelled, and she was bummed.

“I’ll take you to dinner!” I burst out gallantly as I immediately felt the inconvenience and weight of that commitment slam down on my head like a pallet of bricks.

I talked myself into the fact that I was only going around on this ride once, and I should really make the most of it.

Long story short: we ate dinner and made out for hours. Hours. In my car. It got so heavy, we whispered back and forth about the possibility of going back to her place. I had visitation with my children in the morning, and she had her own moralistic reservations, but we agreed that waiting for next time would be delicious. I was floating on air for days afterward.

Well, the next visit, she began to act strange. Everything that we spoke about in our messages and phone calls seemed to no longer apply. We went to bed—she, still in her clothes—and nothing happened.

A few days had passed, and we spoke on the phone again. She asked if I wanted to know what led to such an abrupt change in her attitude. I did. And I didn’t.

She said I was too into her, and it made her feel “repulsed.” At the time, it was likely one of the worst rejections I had ever experienced in my life. Truth be told, I blocked her on everything and made a vow to never speak to her again.

About a year later, I was a couple of months into a new relationship when my partner and I began to argue. She explained, in minute detail, all of the things that bothered her from the short amount of time we had been a couple. I listened and responded the best I could. We made up eventually, and she spent the night.

The next morning, I completely changed my mind about the relationship. I felt…repulsed. There was nothing I could do besides allow the relationship to degrade until it finally came to an end about a week later. I mean, I couldn’t very well just come out and say she repulsed me. That would’ve been horrific. I remembered how I felt when someone said that to me.

When everything was over, and I was back to being alone, it dawned on me that I had experienced exactly what the woman from years earlier said to me. For the first time, I was able to have some empathy for her. But more than that, I was curious about what it was we both experienced.

There’s actually a name for it in the “urban dictionary“: Sudden Repulsion Syndrome (“SRS,” for short). To quote from this source, SRS is “a condition many people experience after dating an individual for a short amount of time. The individual is probably polite, nice, and generally pleasant to be around. Still, one day, you suddenly find yourself disgusted by his or her appearance,” and the thought of sex with the person makes you “…vomit in your mouth a little.”

I took a cursory shot at researching this phenomenon in an academic way, and there was precious little content available that went beyond fluff-type blog pieces. That being said, it’s not something that can be discounted as mere bullsh*t in an age of cyber superficiality and Instagram indoctrination. My own experience has taught me that it happens fairly often in the dating world. Google the phrase—almost every major blog has a piece devoted to it.

Not one, though, offers any solution besides following one’s gut and just bringing the curtain down before anyone gets more hurt than they are inevitably going to be.

For the most part, it is our body’s way of communicating to our more stubborn minds that we are not with the right person. Perhaps, subconsciously, we know we have made a turn down the wrong road, but we refuse to give in to the red flags. We brush them off as minor annoyances until our bodies become repulsed enough to finally get our mind’s attention.

And if that actually is the case, we can do nothing except simply be in awe of the efficient way that our minds and our bodies work in concert to protect us from our own half-assed decisions. As Bruce Springsteen so aptly put it, “Ain’t nobody like to be alone…” and this reality will see us making some really dumb moves from time to time. If SRS is an evolutionary protective device, we should really honor it for what it is.

I mean, try fighting it. It just doesn’t work. Once you have reached that mysterious point, there really is no going back. I can say for myself and for the half dozen or so people I have queried, this process does not reverse itself no matter how much time passes.

But people were meant to be more to each other than sex toys. If you believe, as I do, that we do not live in a world of strict chance—that we are destined to learn something from each encounter in our lives—then it’s all good. Especially if we can embrace the fact that we were meant to learn lessons that go beyond “reverse cowboy” and oral sex techniques. (It helps a lot if we are open to that.)

As a society, we have come to put too much weight on such a banal activity as recreational sex, and I’m as guilty as anyone else. However, we can choose to adopt a more spiritual approach.

And, by all means, we should.