Grief is a Complex Son of a B*tch.

National Grief Awareness Day, August 30th: Raise the awareness for those grieving and allow space for their experience.

Several years ago, I learned about International Widow’s Day (June 23rd), a day set aside to recognize the hardships that widows face from loss, that fell one day after National Onion Rings Day.

Even after becoming a widow in December 2015, I had no idea there were national days I could call mine. (And I’ve loved onion rings my whole life!)

Last month, I heard that August 30th is National Grief Awareness Day, a day that acknowledges the different ways people cope with loss and process grief—a day inclusive of more people. I immediately thought of my two children and the lessons they taught me about grief when they tragically lost two family members on the same day.

On the morning my husband took his life, the scene at home was chaotic: the police activity at the house, the curious and stunned neighbors milling around, the hysterical widow collapsed in shock on the sidewalk (that would be me) surrounded by friends and family who had received the dreadful “note” via email and rushed over. Even in a haze, I recall so many moving parts.

However I failed to notice when the police officer opened the front door and our two dogs, Brownie and Fate, bolted out. Fate, our terrier mix, was luckily stopped by a neighbor. Brownie, our little chihuahua mix, ran before anyone could catch him.

Later that day, when my son and daughter had been picked up from school and the awful message about their dad was relayed, they, at 11 and 8 years old, crumbled in horror. But I’ll never forget when they heard that Brownie ran away—it was the straw that shattered the already-broken camel’s back.

“Noooooo!” they both screamed.

In those first couple of weeks, an obsession to find Brownie grew. And believe me, I tried. I called animal shelters. I drove up and down the streets in a mental fog. Eventually we had to accept that Brownie was gone.

Maybe he found a new loving home was the hope. Because the alternative was too painful to bear, even for me. And yet, that alternative was easier for my children (and for me) to process regarding the death of their dad. My husband. Our family unit. As devastating as it was to lose their beloved Brownie, it was a bite-sized nugget of grief that my children could digest.

Tackling their dad’s death would be the next long journey.

I believe that is the nature of grief and loss. Any loss, especially with the finality of death, is traumatic. And trauma wreaks havoc on our nervous system. Our body knows it can only process in increments at a time before our autonomic nervous system is triggered to fight, flee, or completely shut down.

My children took the smaller of the tragic losses and worked it through: the shock and denial of his leaving, to the guilt of not finding him, to the anger that he could leave, to the hope that he could find his way home. With time (and family therapy) to process, they accepted he was gone—“he” blurring lines between Brownie and Dad. Both then and continuing into now.

Grief is such a complex son of a b*tch. I despised it most when it hurt my children and I could do nothing to protect them. Grief is also multilayered. It lays roots from an initial loss only to be triggered by later or subsequent losses. Like a complicated wound that scars over with time but just as easily gets scratched open raw.

Sadly, no one is immune from grief. Yet, that also means that regardless of age, gender, cultural or racial background, we can collectively come together on a day like National Grief Awareness Day and show loving support for everyone experiencing and processing grief. I don’t think National Veggie Burger or National Middle Child Day can say the same. (No offense.)

So to anyone and everyone experiencing grief today or any other day, please know my heart and support go out to you. I don’t know if it gets easier more than it gets different. 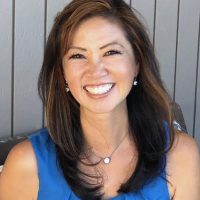 After losing her husband of 14 years to suicide, Lisa Kumagai has inadvertently embarked on a late-blooming, coming-of-age journey that awkwardly parallels her two adolescent … Read full bio