This is our Brain on Grief.

Hello again. Long time no see. Pull up a chair.

It’s me again, your friendly neighborhood grief writer. I was going to say counselor, but I’m not a qualified counselor of any sort (though I do have a background in psychology).

But it seems like I’ve unexpectedly taken on an unofficial mantle of grief…something I can’t quite articulate. Grief-aware person? Advocate? Champion? Ambassador? Supporter? (No, supporter just sounds wrong—like I’m all for grief, which just seems weird.)

At least I’ve become a grief (insert title here) on Elephant Journal, where I’ve now written eight articles centered on the subject, and this will be number nine.

A few weeks ago, I wrote about the things you shouldn’t say to someone who’s grieving, and I thought that would be the last grief article for (hopefully) the foreseeable future. But nope, here I am again. And all because of a simple phone conversation I had with my husband yesterday.

He called me up because he was filling out a form that required background information on our family and he needed to know some information, like my parents’ middle name among other stuff. And like the date of my mom’s death. That I answered right away. December 14th, 2015. After all, it was only a handful of years ago and a date I will probably never forget.

She was supposed to be released from the hospital on December 15th. Alas, it didn’t work out that way.

The next question my husband asked me threw me for a loop, even though it was a simple one, and one I should’ve known. When’s your mom’s birthday?

Uhhh…my mind had suddenly gone totally blank. “Um…my mind’s gone blank,” I confessed over the phone. I was confused and taken aback. I had never forgotten my mom’s birthday. I knew it by heart. I used to call her every year to wish her a happy birthday. “Hold on a moment,” I said as I wracked my brain, which had somehow, suddenly, switched that little bit of information off and hidden it away.

A few moments later, I said, uncertainly, “I think it’s January 19th? I’m pretty sure.” I remembered the year, 1950, and gave that easily. But even for minutes afterward, I wondered to myself about the day and month. Is that right? I don’t know. I looked at my mobile phone next to me and thought, “I wonder if I have it saved on my phone somewhere.” But I was rattled and shook up by the fact that I’d entirely forgotten this little nugget of information and didn’t want to go looking anyway.

It was almost embarrassing. My husband had written down the information I gave him by that point and had moved on to ask me more questions.

I hung up the phone and sat wondering. I wondered about grief and death and what it can do to your brain and your capacity for recalling information. I’d read and seen various things—books and articles and videos on the impact grief has on the body and brain, and I thought, wow, even more than five years later, grief can flip a switch in you and temporarily mess you up, which I knew, anyway, having had a reminder just four nights ago.

As I was trying to fall asleep, for some strange reason, it popped into my head out of nowhere that my mom was gone, and I felt a strange constriction and heaviness in my chest and heart. 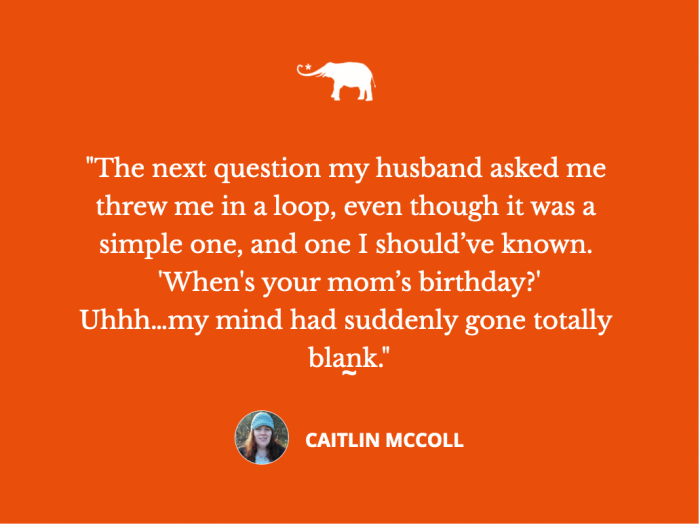 Five years is really just the blink of an eye in terms of grief. I knew that grief can impact the brain but wanted to know exactly how. So I did some research.

The symptoms listed probably mainly apply to early grief, though as I’ve said before, grief isn’t something that ever really goes away; it just changes, ebbs and flows over the days, weeks, months, and years.

So here is what I discovered about our brain on grief:

It can cause disorientation, confusion, and brain fog. These symptoms are your brain’s way of protecting and shielding you from emotional pain. Our brain does things to try and keep us safe from harm, so it can do weird things. It can also rewire the brain into a permanently stressed state.

It also affects things like concentration, memory, and causes general absent-mindedness, like when you misplace your house keys. They aren’t where you usually put them, and you eventually find them in a cupboard next to your spices. What?

It even causes simple, everyday tasks to become difficult and affects our ability to recall information (my mom’s birthday, hello!). And say goodbye to any sort of organization or planning. Those skills go out the window too.

Because grief puts you into such a strong emotional tailspin, it impacts the parts of the brain that deal with emotions, like the limbic system and the pre-frontal cortex that regulate emotions as well as memory and multitasking.

According to one study, the longer and stronger we’re affected by grief, the more our memory is impacted. Grieving for a long time becomes what’s known as complicated grief.

So if you’re dealing with grief and you feel like you’re losing your mind, don’t worry; that’s normal. It’s your brain’s way of coping (or not coping as the case may be) with intense emotions and turning everything offline so your body can deal with more urgent matters like overall survival.

Have you experienced any of these issues while going through and dealing with grief? I’d love to hear from you.