From Emotionally Unavailable to Available for Life.

I knew he was trouble when he commented on the sound of my voice as we introduced ourselves.

His features reminded me of the broken modern Romeo whom I shared my first rodeos with at the age of 16.

He had been the first guy with whom I publicly held hands and tried sushi with. Down the ride we moved in together.

We were like Bonnie and Clyde—we brought the party home. We were high on the illusion that ecstasy could numb the pain of our childhoods.

By 21 I was barely skin and bones, and the chemicals had stopped working. I packed my suitcase full of lessons and headed to the airport.

In the years following my departure, my short-lived romances were with emotionally unavailable men.

I got comfortable being alone. It was safe to be alone. I had no faith in being chosen, nor did I trust myself in loving another. I realised that I had been left believing that no man was worth losing my freedom over.

The fourth year into singledom was when Romeo’s doppelgänger manifested into my present.

It began with our mutual liking for coffee, which lead to messaging, and then to touching. His fingertips on my skin awakened the senses that I had hidden well. However innocent his excuses, it felt inappropriate—he was not single.

I did not think that he had the freedom to pursue more—and then we kissed.

For a woman who had isolated herself from physical touch, for a split-second, doing the wrong thing made me feel alive.

My resistance was received by the doppelgänger as an invitation to try harder. That was when the triggers began. He wanted to break my barriers. He called out on the walls I had built around my heart. He wanted the part of me that I refused to give—he wanted my all for himself.

Every time I felt that he disrespected my space, it made me angry—my triggers were an indication of my disrespect for my own self.

I questioned his appearance in my life, for I had not met a man who persisted in pursuing me. Others had let me walk away, but the doppelgänger grew on my weakness like an incurable virus. He was everything I did not want love to be, yet his actions gave me clarity—I learnt that I was the emotionally unavailable one.

After months of resistance, I surrendered, trusting that the experience would leave me when it had served its purpose.

One morning, I woke up to find his message that our relationship was no longer a secret. While I hated myself for being the cause of hurt for another woman, it meant that I would no longer have to say yes whenever I wanted to say no.

She and I both knew that it could have been any other woman, but in her story, I was the other woman. Accepting that I was the cause of her pain made me understand the consequences of my feelings—I felt unworthy.

It was in the asking of forgiveness that I learnt the beauty of choosing to do the right thing, especially when I had done wrong.

The breaking point of the experience granted me the gift of choice, to choose the option I had never chosen before—to believe in the existence of a love that I desired.

My experience with the doppelgänger taught me that we attract what we are and not what we desire.

When I gave myself permission to feel worthy, I became available for life, and my well-being became the centre of my focus.

I stopped counting my days of singledom, I stopped waiting, and I started to rejoice in my freedom. I stopped hiding, I broke down the walls, and instead I built boundaries.

I gave myself permission to do the things I would normally say no to. I made plans and showed up for them. I brushed the dust off my wish list and attended to them one at a time.

I filled my life doing the things that I love, until my heart began to resonate with contentment that I was enough.

I learned to listen and finally made friends with my loneliness. 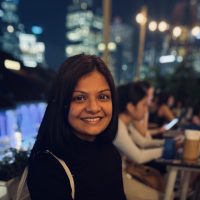