The Fierce Lessons I Learned from being Chased by Dogs.

My last day crept up on me; it always does.

The minute a trip starts, I already want to press the pause button, as before I know it, the last day arrives. The experience you have researched and obsessed over for months, the trip you have daydreamed about and imagined, soon becomes a memory.

Always be 100 percent present and take in every single second as you want to collect the most vivid memories to look back to one day.

I debated whether there was time to fit in a final Easter Island gem, a straightforward hike to witness an inactive volcano with my own eyes. Later that same day, I was flying out, but it seemed possible if I woke up early and didn’t mess about.

I can procrastinate and run out of time when I don’t have time to run out of. I thought everything through. Off I went, thinking it would be easy—even a pleasant way to end the trip.

The whole time on the island, there were dogs everywhere. They seemed vivacious. You could even describe them as a passionate bunch. Most of the time, they were sniffing about you, lying lethargically in the intense heat or, well, making dog love. You know, doggy style. Not joking; they were at it all over the island in broad daylight most of the time. So far, I’d kept my distance from these passionate pups.

As I turned the corner toward the road that headed toward the volcano, I looked ahead to a shortcut directly toward the hike route entrance. There stood three slightly over friendly-looking dogs. All looking at me eagerly. Passionately, in fact.

I wouldn’t say I’m a big fan of dogs, and everyone travelling South America knows the number one threat is a dog bite. I sorted my rabies jab before I travelled but didn’t fancy the hassle of a dog-fueled incident.

As I tried to “shhh” them away, they automatically assumed I was playing. I wasn’t.

This went on for quite a while, and it got tiring fast. By now, there were four dogs; as one popped up from the shrubs, they took turns to come and try to play with me, and each time, I would make awkward noises.

I felt another tantrum bubble inside.

I scanned the scene, trying to think of a way around this. As I walked away from the dogs towards the main road, they all followed me. Argghh.

I suddenly felt all anxious as dogs make me feel uncomfortable, especially as they are so volatile when over-friendly playfulness can turn to aggression. With only one solution to this over-friendly dog situation, I decided to go with the flow and allow the dogs to accompany me on the walk.

This island and its powers.

I still didn’t fully lean into the situation, though. I am not that fearless. I picked up this massive walking stick and became part leader and part follower in this dog gang. One dog liked to walk ahead of us, one strolled alongside me, one annoyingly walked close behind by constantly walking into my heels and one stayed at the back on patrol.

With no one else in sight as I walked deeper into the hiking forest route, I felt safer with the dogs.  Whenever I heard a spooky sound, I would slow down, try to figure it out, and get comfortable. At one point, I thought I lost one dog, but it reappeared further up the track. I think it heard something which spooked it, so off it went to investigate.

I started chatting to the dogs, or telling them off for walking into my heels. When we neared the top of the hike, I lost one again, or maybe it got fed up with my chat. We seemed to gain another dog into the gang though. All quite confusing.

When we eventually reached the volcano rim, I felt a sense of relief and smiled. By this point, the dogs were off playing and exploring the vast openness. With only one dog left, the one who stuck by my side the whole time, we walked toward the volcano rim. Weirdly, I felt more connected to the island through that walk and the encounter with the dogs. The hike wasn’t hard or tricky, but I was aware there was no one else around. Having the dogs around felt like a warm safety blanket, especially when you hear trees creak or branches snap. For someone who is not a dog fan, I felt like they were my spirit animals guiding me up through the hike.

After exploring the volcano rim, with the most amazing panoramic views out to the ocean where it looked like the far away rim edge crumbled out to the sea, I ran back down through the forest to the campground. The dog whispering episode at the beginning of the hike had eaten into my allocated time.

As I arrived back at the campground, ready for the final airport transfer, I thought to myself, “Were the dogs sent to teach me to lean into my resistance and always challenge my inner stories?”

My inner dog story is not my own experience, but one passed down from a family experience, where my mum was attacked by a dog. Her dog fear subconsciously passed onto me as she freezes up around dogs.

After a morning with the dogs, sharing a love for the wilderness, I slowly felt my internal dialogue reset.

Don’t allow someone else’s fear to dampen your own spirit! 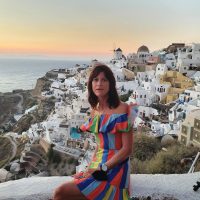 Jacquelyn Armour wants to share the world through the eyes of someone who has wandered the streets of 90 countries, learning about herself, and life along the way. Jacquelyn… Read full bio