Getting Sober & Getting Fit: the Surprising Link.

I was huffing and puffing my way through cycling class last week.

I couldn’t help but notice how similar my current experience was to what I went through while trying to get sober.

For context, when gyms were a thing (I live in Toronto, Canada, and gyms only recently opened since closing in fall 2020) I was a part-time indoor cycling instructor.

I love riding and with time and consistent practice, I became a really strong rider.

After becoming an instructor, I was regularly teaching (and riding) 5-10 classes a week.

I was in great shape, felt strong in my body, and my cardiovascular health was at its peak. Then COVID-19 happened and gyms were all but non-existent.

I tried to stay active and maintain some semblance of a routine and to some degree, I did. I have incorporated a daily walking routine that I love, but it’s not the same as the intense movement I was used to.

As the months dragged on, the impact of not having challenging workouts in my life began to take a toll.

I started noticing that my body felt different: my moods fluctuated, my sleep wasn’t as great, and I generally didn’t feel good. Physical activity has always been a pillar in supporting my physical and mental health and its absence was showing.

So, in February of this year, I finally decided to do something about it. I invested in an indoor bike (which arrived in March) and I’ve been on it. A lot.

And while I loved being back in the saddle, it was also terrible—utterly excruciating almost all the time. In the early days of getting back on the bike, my body was wildly uncomfortable. 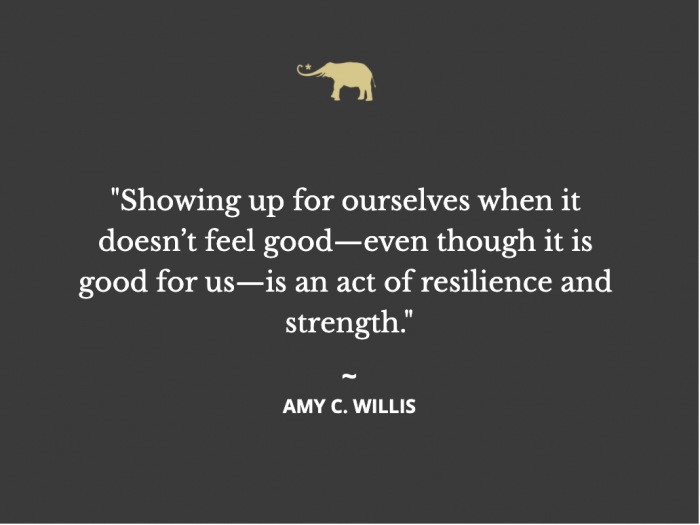 I could barely breathe, I could hardly keep up with the classes, and running through my mind were self-defeating thoughts of how out of shape I was, how I may never get back to where I once was, that it will feel challenging for a while (plus a smidge of guilt for not acting to resolve the issue for myself earlier).

But I did. Many, many times.

Since my bike arrived in mid-March, I have completed over 140 cycling classes, which are not to gloat but instead to demonstrate that we can do hard things and continue to show up for ourselves—even when it doesn’t feel good.

Showing up for ourselves when it doesn’t feel good—even though it is good for us—is an act of resilience and strength.

As I was struggling my way up a steep climb on my bike back in March, I couldn’t help but think how similar my experiences of getting back in the saddle are to the journey towards sobriety.

Both are deeply uncomfortable in mental and often physical ways. In order to see progress, it’s not enough to show up once—as progress requires consistency and practice.

Even if it doesn’t go perfectly, that doesn’t mean you aren’t making progress. Change certainly doesn’t happen overnight. Sometimes attachment to old experiences can feel detrimental to being in your reality and acknowledging the progress you’re making.

At the end of the day, if you want to feel better, doing more of the thing that made you feel bad in the first place isn’t the way to get you there—whether that’s drinking or not getting on the damn bike.

Like sobriety, my journey to getting back in the saddle hasn’t been linear.

I’ve done lots of rides and I’ve also missed lots of days (that weren’t intended). There were days that my legs were so fried, I could only do a 10-minute ride (when my “old normal” was 45-60 minute classes multiple times a week) and that simply had to be good enough.

And you know what? It was good enough.

I worked really hard to release previous iterations of myself and my ability. Instead, I chose to focus on celebrating the fact that I was showing up and doing a hard thing, even though it felt awful, was uncomfortable, and in many instances, I really didn’t want to—but I did it anyway.

Whether you’re getting back to your movement routine or tackling sobriety, change takes time.

Transformation, in whatever form, is hard and icky but oh, so worth it.

It’s not about doing it perfectly or never falling off track again but about deciding that you’re going to do the thing to support yourself in feeling better and ultimately living the life that you want.

It’s an investment in yourself in terms of time (and sometimes resources), and I can’t think of anything more worthy of investing in than the betterment of yourself.

Patience, practice, and consistency are your new best friends.

Now, more than 140 rides later, I feel like a different version of myself, and the struggle that I experienced in the early days is a mere memory.

I feel different today because I chose to show up, imperfectly, 150 times. And it’s not about the number.

There is no magic number of rides or sober days that ensure change or success.

It’s the internal knowing that we will continue to make the choice—to choose ourselves—day in and day out, no matter what it looks like or how it feels that gets us there. 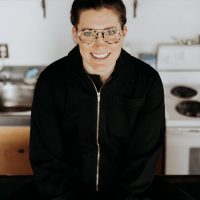 Amy C. Willis is a dual-certified Sobriety and Mindset Coach, supporting women in reclaiming their freedom and power through sobriety via one on one and group coaching and the… Read full bio