It’s Time to Straighten Your Crown: How to Silence the Inner Critic & Take Back Your Throne.

I know my inner critic is an evil, sadistic, abusive, compassionless, power-hungry traitor.

I know she is sneaky, conniving, and deceitful, masquerading her abuse as logic and practicality, attempting to present as a mechanism that keeps me safe—a voice of reason that knows what is best for me.

I know she is an imposter. I know my heart would never ever say anything that would feel abusive, cause me to limit or doubt myself, or create fear or disharmony. But this disloyal advisor to the Queen, this inner critic, will still jump at every opportunity to assert herself and steal my throne, which is the rightful place of my inner goddess, my soul, and my heart, so I must always remain vigilant, keeping her honest and in service to the Queen, the Divine Goddess within.

And so once again, the traitor was caught in the act.

I wasn’t feeling so great, but I couldn’t put my finger on it. It was a beautiful day—truly an amazing gift. But I felt down and lacking in energy. Kind of lonely, kind of sad, kind of…just not sure.

So I decided to make a mental list of things I was grateful for—a known mood-booster. And I felt worse! How could I feel worse as a result of a gratitude exercise? And then I noticed that other voice in my head.

When I thought, “I am grateful for this beautiful day,” the other voice countered with, “You’re wasting it inside.”

When I thought, “I am grateful for living in such a beautiful, amazing place,” the voice said, “You aren’t out experiencing it.”

And I was horrified, not only at what I was hearing, but that this was coming from inside of me and this was a part of me, and that it had been going on for some time without me being consciously aware of it. My inner critic was again playing at her game of being the trusted advisor, who after having gained the confidence of the Crown, exploits the trust and leverages fear to gain power.

But now she was being exposed once again for the traitor she truly is.

She was feeding off of that core wound of not important/not valuable/inherently “wrong” and the primal fear of abandonment that accompanies it. By paying attention to her remarks, I could literally pick out the limiting beliefs from which these weapons were being forged. Now she was working for me, although she didn’t know she had been found out. With every poisonous word she was leading me right back to her hidden nest of treasonous conspiracy that would have me unseated from my throne.

If she had not been discovered, I would have continued to perceive myself as a victim to the outside world, to those who would attempt to take my Queendom for themselves, and never realize it was an inside job—that the real threat, the only threat, came from the Crown’s most trusted inner circle. There’s no other way someone on the outside could have access to the weak spots, the chinks in the armor, to make such an effective campaign.

The throne always comes with the need to guard the Crown and maintain the Queendom. It calls for awareness of what lies within the walls of the castle, hidden in the shadows.

Those threats to your power keep you vigilant. They keep you sharp. They keep you lean. They force you into maintaining your strength and power and occupying your throne.

Let me just straighten my crown.

Here’s how limiting beliefs keep us from occupying our throne:

Our core inner wounds will always have developed some scar tissue around them—those beliefs we took on because we thought they would keep us safe from more suffering, from the deep pain of abandonment. But the minute we believe that what we need to keep us from that suffering is something outside of us, then we abandon ourselves. This not only sets us up for a wound that will never heal, but it creates disconnection, which perpetuates the wound and the feeling of abandonment.

The emotional need for human connection is real—it’s hardwired. Fearing abandonment, we desperately want to not be defective and be “important,” but we are now looking to the outside world and our interactions with others and our experiences to prove to us that we are indeed important and are safe from abandonment. The instant we believe that what we need is outside of ourselves then we have abandoned ourselves.

We are now living the belief “I’m not important.” The energy of that belief and that fear are so great that they attract experiences reflecting that. And we perceive the world through the “I’m not important” filter.

We have abandoned ourselves because we are dependent on something outside of ourselves to “make us okay”—the ultimate betrayal. Now we are powerless. Now we are a victim of happenstance and the outside world. And every time we relive this scenario, a little bit more scar tissue builds up on that wound. We feel more shame. The more we feel shame, the more we disconnect, feeling that we are somehow undeserving of connection with others, and build up our walls a little higher, and this isolation of ourselves becomes an unhealthy pattern.

In our attempt at avoidance of our greatest fear, we keep creating that same dynamic and pain in our lives—because of the belief we are carrying. We perpetuate our own pain. We contradict ourselves. The energy of what we hold within, this belief that is attached to our fear, is the opposite of what we desire, yet the belief will always be stronger. The belief always wins.

We must discover the traitor within in order to reclaim our throne:

Just like in the story above, we must discover the traitor within and see the inner critic for what it is. It’s giving a voice to our fears. It’s speaking from the wound and the false belief that accompanies it.

Listen to your words and listen to that voice. Notice how you are feeling and have the royal guards do a little tracking. When you hear the critical, judgmental words, barely disguised as logic and practicality, listen to hear the negative beliefs in them. And know they are not true.

Take back your throne. Silence the traitors. Banish the fears.

This is a Queendom that Love rules, and Love leaves no room for fear.

Straighten your back, straighten your crown, and accept your place as sovereign ruler of yourself. You will never be abandoned because you have come back to yourself. Your self-love and self-esteem are the only protection you need.

By being your own authority and being responsible for yourself, by occupying your throne, you stay in your power, and so can never be unseated by falsehoods borne out of fear.

You can never be abandoned if you don’t abandon yourself. 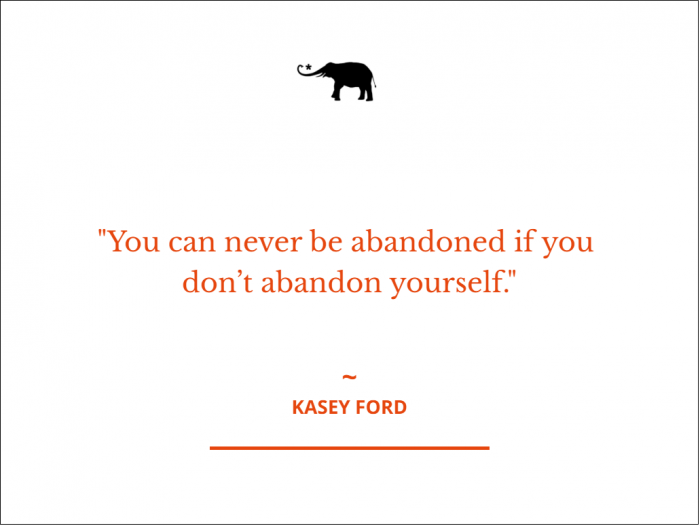 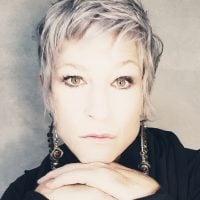