COVID-19 in the U.S.—Something Needs to Change, ASAP.

Dear United States, I am really worried about you.

The last 20 months have been hard. Many people died. But some things haven’t changed.

I understand that personal freedom is extremely important, but that doesn’t mean we don’t need to care about others. Every society has a different approach to balancing individual freedom and national interest—and it’s undeniable that the ongoing pandemic caused more deaths in some countries than in others.

As of today, almost 750,000 deaths were caused by COVID-19 in the United States—and there is no end in sight. But why is that?

It’s most probably a mix of all of the above. No other nation is perfect when it comes to handling the pandemic, but it’s safe to say that the most powerful nation on this planet got hit harder than others.

China just tested 34,000 visitors at Disneyland in Shanghai because of a single COVID-19 case. Austria is thinking about a lockdown for unvaccinated folks. Most European countries introduced digital vaccination passports and excluded unvaccinated citizens from public events and travel. Australia had the longest lockdown of all countries.

All of that sounds pretty extreme compared to what’s happening in the United States, right?

But how does this sound to you? Folks in the United States reject masks, vaccines, and digital vaccination passports. Numbers are already worse than last winter—that’s pretty extreme, in my opinion.

Seriously, how about doing something to prevent another terrible winter? How about changing the strategy?

At the same time, most folks act as if the pandemic is already over. Isn’t that crazy?

And it’s not surprising at all. When 25 percent of the population aren’t vaccinated, we are talking about 80 million people in the United States—that’s the size of Germany. Just imagine if Germany had reopened everything last year before we had the vaccine—and that’s basically what’s happening in the United States.

There are far too many unvaccinated folks to open up stadiums, malls, and nightclubs.

It’s true that vaccinated folks can still catch the virus, but it’s also true that 99 percent of folks in hospitals are the ones who are unvaccinated.

But let’s not make this a debate between vaccinated and unvaccinated folks. Let’s assume that a certain percentage of citizens doesn’t change their mind on this topic. What now?

Noam Chomsky went a bit too far in my opinion by saying that unvaccinated folks should not have access to supermarkets anymore. But I also don’t agree with folks who support dropping all COVID-19 mandates and returning to our old normal at this point.

It boils down to two options: we can either all get vaccinated and open everything, or we keep the status quo and mourn the deaths of loved ones while also not returning to what we call normality.

Just imagine there was no vaccine. We would still be in lockdown. Vaccines are the only way out of this mess—or we accept a rising death toll.

Is that such a difficult choice? Really?

In Europe, we also have folks who don’t want to get the vaccine. These folks are upset that they aren’t allowed to attend public events and face limitations in daily life, but it is what it is.

Why would I not attend a concert because others reject the vaccine? Why should society stay in a never-ending lockdown because some folks call scrolling their social media “research?”

That’s why we have vaccination passports. Those who are vaccinated can do whatever they want to do, but those who are unvaccinated have to deal with the consequences of their choices.

Apparently, Conservatives in the United States won’t accept that either. They want everything to be open for everyone—no matter if they’re vaccinated or not. Seriously?

Why would I put myself at risk because others decided that they didn’t care about my safety? Why would I attend an event knowing that parts of the audience aren’t vaccinated?

It’s time to talk about what liberty actually means.

To put it into simpler words, “Your freedom ends where it starts threatening my health.”

I am sick of this pandemic, and I am sure that I am not the only one feeling this way. I am super mad at folks who still argue against vaccines by using misinformation they found on social media. It makes me furious to see politicians (who should know better) protecting the so-called freedom of speech at school board meetings.

What are we even arguing about?

The pandemic is still causing deaths of loved ones, there is no end in sight, and some folks insist on continuing to do what they did for the last 20 months.

I am looking at you Marjorie Taylor Greene, for putting other elected officials at risk by not wearing a mask. I am looking at you Ted Cruz, for defending parents using Nazi salutes to make their case at school board meetings. And, of course, I am pointing fingers at the Republican Party for trying to make political gains by riling up their supporters against common sense.

Everyone has to make their own choice on getting vaccinated or not. But my point is that folks who decide not to get the vaccine also need to accept the consequences of that choice.

Let’s stop pretending that the pandemic will go away if we stop talking about it. Ignoring a problem usually makes it worse over time—and COVID-19 is no exception to that rule. 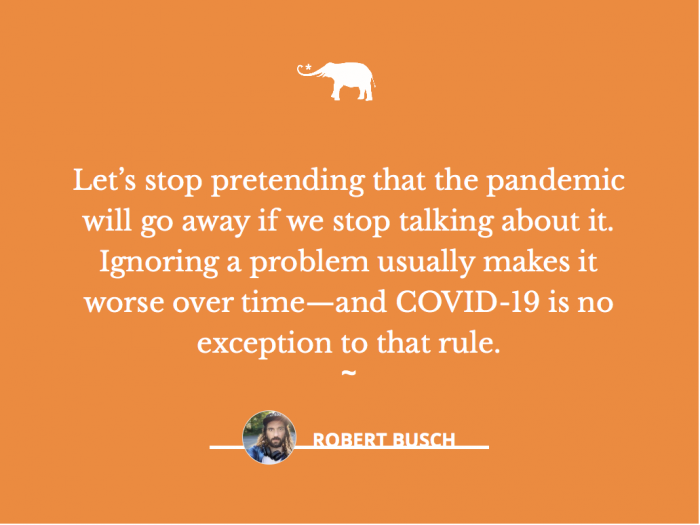 Hearted by and 5 other readers

I am not asking the United States to copy what China, Europe, or Australia did, but I beg you to do something about it.

We have the chance to return back to our old normal after this winter—unless there’s a variant that is able to escape the current vaccines. If that happens, we are back at square one.

And most of us understand by now how variants work. Just in case you missed it: the more folks get infected, the higher the chance of variants.

We can’t afford another winter with spiking case numbers. We can’t have a daily average of 74,504 new cases every day and pretend that we are all good. Something needs to happen as soon as possible.

I am not here to tell you what to do, but I am begging you to do something.