The Moral Bankruptcy of Mitch McConnell & the GOP. 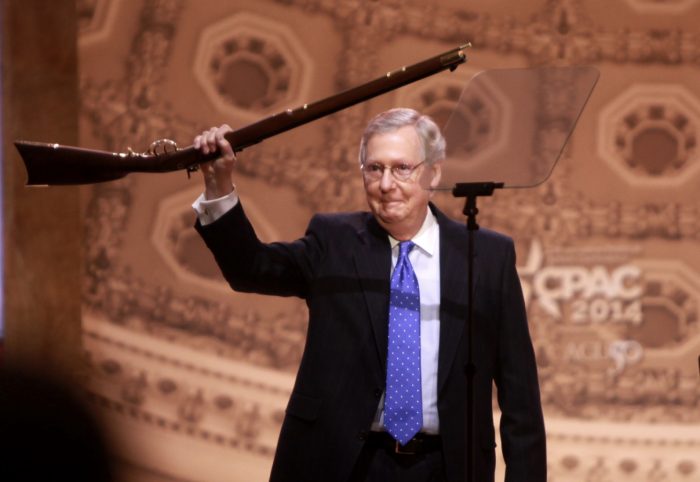 Donald Trump not only got acquitted, he immediately announced to continue his fight to “make America great again.”

Most political observers are not really surprised that only seven Republican senators voted to impeach Trump. We have seen GOP lawmakers defending Donal Trump as if it was a competition on who is the most loyal MAGA supporter in the Senate.

I am not surprised that Mitch McConnell voted against impeachment, but his reasoning sounds like a really bad joke to me.

McConnell tried to have it both ways: he acknowledged that Trump’s actions caused the riots, he pointed out that the 75 million people who voted for Trump did not all participate in the storm on the Capitol, and he voted against impeachment because he has doubts about the legal aspects of impeaching a president who is not in office anymore.

As Nancy Pelosi already reminded us, McConnell himself postponed the impeachment hearings to happen after President Biden’s inauguration. One could say that Mitch created these circumstances himself.

I didn’t expect Mitch McConnell to stand up against the Trumpers in the GOP, but I was still shocked by his reasoning.

McConnel acknowledged that “Trump is practically and morally responsible for provoking the events of the day.” At the same time, he emphasised that the 75 million folks who voted for Trump did not storm the Capitol. He admits that Trump didn’t do anything to stop the riots by saying, “He didn’t take steps so federal law could be faithfully executed and order restored. No. Instead, according to public reports, he watched television happily—happily—as the chaos unfolded.”

Let that sink in: McConnell knows that Trump is responsible for a domestic terror attack that threatened the lives of elected officials, he also admits that Trump didn’t try to stop it, and he claims that the Republican Party and its voters have nothing to do with this.

The GOP just missed its biggest chance to get rid of Donald Trump. Not only that, they encouraged the former agitator in chief to keep fighting.

Donald Trump didn’t wait long to release a statement that gives us an outlook on what to expect in the coming weeks and months. Here are a few of the highlights of Trump’s statement:

“Our historic, patriotic and beautiful movement to Make America Great Again has only just begun. In the months ahead, I have much to share with you, and I look forward to continuing our incredible journey together to achieve American greatness for all of our people. There has never been anything like it!”

“I always have, and always will be a champion for the unwavering rule of law, the heroes of law enforcement, and the right of Americans to peacefully and honorably debate the issues of the day without malice and without hate.”

“We have so much work ahead of us, and soon we will emerge with a vision for a bright, radiant, and limitless American future.”

If I was a decent Republican like Mitt Romney, who voted for Trump’s impeachment both times, I would think about leaving the party. If I was a Republican lawmaker, I would ask myself if I want to be part of this circus. If I was a hardworking American conservative, I would question my own role in this.

And that is what bothers me the most: the GOP and Mitch McConnell know that Trump was responsible for what happened on January 6th, but they completely ignore the fact that they enabled this behavior for four years.

It is easy to blame one person for everything, but it doesn’t solve any problems, especially if that blame doesn’t translate into actions. How can any sane person say that Trump did all of this by himself? None of this would have been possible without his supporters and GOP lawmakers tolerating his outrageous actions.

Let’s imagine for a moment what would have happened if Barack Obama had done the same thing as Trump. Imagine Obama not accepting the Trump victory in 2016 and inciting a violent Antifa mob to attack the Capitol. Imagine how Republicans, Fox News, and McConnell would have reacted to that.

But it doesn’t matter anymore; Trump is acquitted, and the GOP will continue to back up conspiracy theory supporters like Marjorie Taylor Greene and morally bankrupt lawmakers who will do just about anything to get reelected in their states. It was their chance to say “enough is enough;” instead, we got a “this didn’t go well, but we will try again.”

So I guess we better get ready for Trump to make his next moves to push the GOP in any direction he desires to. My guess is that he will try to start his own news network pretty soon. He will try to keep his movement, one that some would consider cult-like.

The world is watching as McConnell defends someone who he knows is guilty as charged.

The world is watching as 43 GOP lawmakers decided to have Trump’s back one more time.

The world is watching as inciting a deadly riot and interfering with the democratic process is not enough to impeach a former president.

The era of Donald Trump dominating the GOP could have ended on January 13th. Instead, McConnell brought it back to life with one of the most illogical statements ever made on the Senate floor (besides the stuff the insurrectionists shouted while storming the floor).

Maybe Ted Cruz thinks about running for office in 2024? Who knows, maybe Candace Owens will be his VP pick?

Imagine Trump joins forces with Steve Bannon (who he pardoned during his last days in office) to start a news network supporting that ticket. Maybe Tucker Carlson will switch roles and become a politician soon. There are so many things that could happen in the next years, and McConnell will be able to say: “I made all of this possible.”