Who is Candace Owens & What do We Need to Know about Her? 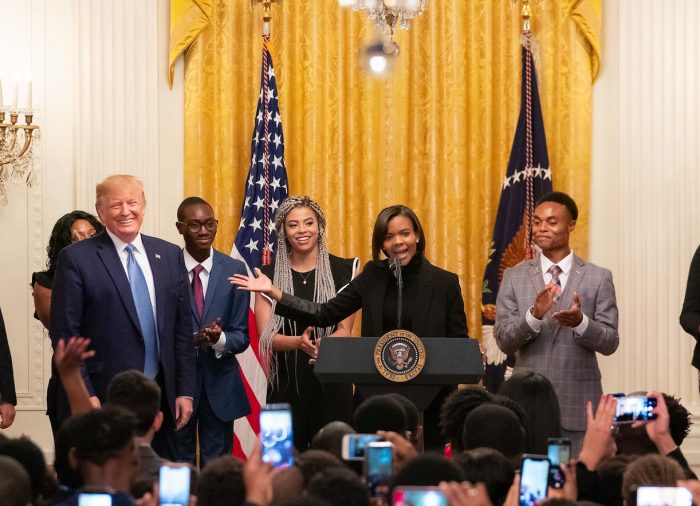 You might have seen the video shared by Candace Owens.

It was the most viewed clip on social media this Wednesday. Over 45 million views on the first day. It popped up on my timeline because a person associated with my ex-pat yoga community posted it. I was confused.

She was praised as the voice of reason, but what did she actually say, and what is her background?

Her point is that George Floyd does not deserve to be remembered as a good human being. She points out past charges against Floyd and mentions that he apparently took drugs on the day he was murdered. At the same time, she tries to make sure that we think the cop did the wrong thing, but she claims that George Floyd is not innocent because of his character.

Hearing that narrative from a woman of color is troubling. What is her intention? In order to get a better understanding of where she is coming from, we might want to take a look at statements she made in the past.

Candace Owens was loudly speaking up against the lockdown, she defended the guys killing Ahmaud Arbery in Georgia, and now she is agitating against Black Lives Matter. Her fame is based on promoting ultra-conservative opinions as a woman of color.

White folks share her videos and point out that something can’t be racist if a woman of color said it. It makes them feel better about themselves. It takes away their guilt.

First of all, I am open to different perspectives, and everyone can share whatever they want to share. Freedom of speech applies to everyone, and she is entitled to her opinion, but maybe we have to draw the line somewhere, and that is when people are fooling their audience.

Before 2015 she described herself as “unpolitical,” but then she became a liberal in 2015. Since 2017 she is an open Trump supporter, and now she is famous.

Is it possible that people from the far-right fund her activism?

How would her opinion be received if she was a white man from the south? It seems that those folks are her fan base; it is definitely not people of color sharing her video.

My problem is not Candace Owens. My headache is caused by all the people sharing her content—the ones who remained silent for a week after what happened in Minneapolis. I am worried about all the people who were offended by my last two articles and attacked Elephant Journal for publishing my perspective.

Maybe we have to take a closer look at our own community?

I haven’t seen a single post by any of the big yoga brands or communities speaking up about Black Lives Matter, but I do see all these “New Agers” being worried about George Floyd’s character and the terrible riots on the streets.

Did they tune in late, or did they miss out on purpose?

I was shocked when I saw “yogis” falling for conspiracies when talking about COVID-19. Now the same people are expressing their opinion by not saying anything. They hide behind “All Lives Matter,” empty statements calling for love and people like Candace Owens.

Candace Owens might be right. Maybe George Floyd had a drug problem and was a person who was struggling, but does that make any difference?

It reminds me of a different conversation that has the same dynamics. It is not appropriate to ask someone who was raped what she was wearing because it would put part of the guilt on her side. I hope we can all agree on that.

How does it make any difference what George Floyd did before he got murdered by a cop?

Even if he smoked crack, had sex with prostitutes, and cheated on his partner (which I am not saying he did), this does not give any cop the right to kill him. It doesn’t make any difference and does not take away any guilt from the officer.

White privilege shows when people deny the existence of a problem that does not affect them. It shows when arguments are used that defy logic and try to distract from the real issue.

Do we have to talk about violence amongst protesters? Yes.

Do we have to make sure cops feel safe doing their work? Yes.

Is it time to tell people of color how they are supposed to feel about George Floyd? No.

It is not the role of the offender to decide how the victim is supposed to feel. Everyone can have their opinion, but we need to be aware of the context and who we are.

Many people do not speak up because they are worried about how their “All Lives Matter” friends will feel about it or that they could unfriend them on Facebook. After writing articles for Elephant Journal, I received messages from people stating that they wouldn’t come to my yoga classes anymore because of my opinions. That does not feel right, but it won’t silence me.

Staying silent for a week and then posting a video that slams protesters and George Floyd is not good timing and makes me question the perspective and motivation behind it.

We need to be aware that Team Trump is using social media and paid actors to create a narrative that helps him get reelected. Nothing wrong with that, it is his right to run his campaign that way, it is his choice. If people want to support Trump, they should, but they should be honest about it.

Don’t hide behind Candace Owens and other actors—admit it, and then we can talk.

Silencing the protests and trying to distract is not an argument. Sharing content created by Trump supporters like Candace Owens is not unpolitical.

If you support Trump, be open about it, and then we can have an honest conversation.

If you Know you aren’t Racist, watch this Blue-Eyed, Brown-Eyed Test.

Another from the author:
Let’s Stop the Conspiracies & Take a Look at the Real Issue: Minneapolis.