“Rape is always invited. It never Happens.” What the Actual F*ck? 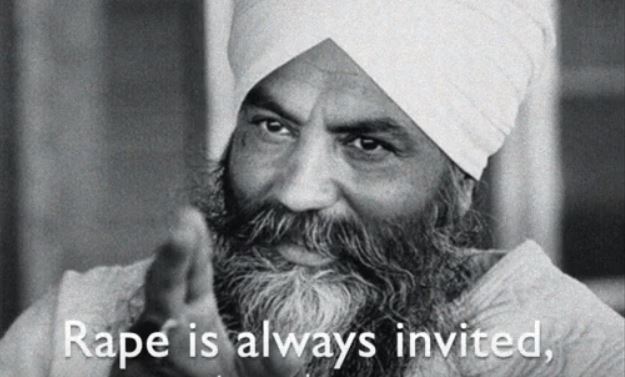 I believe yoga is a path to liberation and Samadhi, versus just turning and twisting your body.

The gurus who show the light are out there—but finding your “true guru” can be a challenge.

In the name of yoga and spirituality, unfortunately, the concept has been commercialized, and at its worst, women and men have been sexually exploited. And this is where we should educate ourselves: where are we going for guidance, what are the teachings of the guru, how is the money being spent by a guru, who are his followers—even try researching for any kind of public records, ask questions, and if does not feel right then chances are it isn’t.

Yes, you read that headline right. My first reaction was “WTF?!” to this posted on Facebook. Missing here is the angry emoji and my blood boiling when I saw and heard this brief video from Yogi Bhajan:

I had never heard of this person before. I am not a follower of any guru or anyone for that matter, though I do like to converse around diverse topics with active thinkers in my discovery for self and quest for personal growth. Therefore, the outrageous and somewhat deliberate headline on the video glared back at me, and I wanted to know more about this so-called spiritual guru.

In the New York Times, Yogi Bhajan is the “‘Boss’ of both worlds—Spiritual and Capitalism,” as written in the obituary section.

A customs officer in India, he rose meteorically by bringing Kundalini Yoga to the West and establishing business ventures, vis a vis providing security to federal offices and Army bases in the U.S., Yogi Tea operations, numerous yoga centers, Golden Temple Foods, and so on. The accumulation of wealth runs in billions of dollars. The “Yogi” was connected to the famous and met with the Pope and the Dalai Lama.

He was also known to introduce Sikhism, a 15th-century monotheistic religion, to the West. His version of Sikhism had some differences from the original one. His biggest accomplishment might have been the 3HO: Healthy, Happy, Holy Organization to expand upon his missionary and spiritual work. From Wikipedia, “In 1994, the 3HO Foundation joined the United Nations as a non-governmental organization in consultative status with the Economic and Social Council, representing women’s issues, promoting human rights, and providing education about alternative systems of medicine.”

In short, the above is the man who also stated that “Rape is always invited.”

One may question if the person is already dead, why we are still talking about him? And how this video may be important today.

The YouTube video came out on Feb 29th, 2020. The description says, “This is an audio recording of Yogi Bhajan from one of his lectures in Española, New Mexico. This recording was made on April 26, 1978.”

My question is simple: would you join 3HO or follow the “teachings” of Yogi Bhajan, after watching this video?

Yogi Bhajan could be considered an opportunist. He saw a massive opportunity in the rising wave of the quest to know spirituality with Beatles, Jimi Hendrix, and Rolling Stones playing in the background. Yogi Bhajan was an enterprising, charismatic, and intelligent man who was able to use spirituality to his advantage in the time when the hippie movement was on, people were experimenting with LSD, spiritual awakening was a goal, and yoga was getting attention.

I do ponder about the women who were with him in the 70s and 80s who came forward (or did not come forward), but either way, never got heard. One such woman who has come forward is Pamela Dyson with her book Premka White Bird in a Golden Cage: My life with Yogi Bhajan. She is sharing her truth and shattering the glorified image of Yogi Bhajan at the same time. As seen with the Harvey Weinstein case, women may not talk about rape, abuse, or assault for many years, but that does not mean that abuse or assault or rape did not happen in the first place. So Yogi Bhajan is still living in these women, and the issue of rationalizing rape by accusing a victim is as relevant today as it was yesterday.

Next on my mind would be asking what conditions in society are set up to make (us women) ignore the warning bells—that feeling in the gut that we are conditioned to ignore. When we suppress our intuition, it can create situations where we allow ourselves to fall for spiritual gurus who are possibly a version of narcissism at its best—bathed in power, money, and entitlement. How can we better understand and listen to our own intuition when following our spiritual path?

More often than not, some gurus prey on the vulnerabilities and wounds of women who may have divulged with innocence a bit of themselves in a self-perceived “safe place,” idealizing the concept of guru, and in some cases, attracted by the charisma and power of the guru. The other reason may include understanding devotion to the guru as a path to healing and construing the sexual encounters from a guru as part of undivided loyalty to him—an applied misunderstood concept of Tantric Yoga as a direct exchange of energy through sex and “being one with guru” as the path to spiritual awakening.

Please know this: a teacher’s actions are not separate from their teachings and this is a distinction we sometimes fail to make.

To sum up, there is nothing wrong with striving to fulfill one’s purpose in life. And one of the highest purposes is perhaps to be on the path to divinity through spirituality. A seeker is one who questions everything, so why do we fail to question a spiritual guru’s teachings and intentions when we are trying to explore the most important part of our existence and individuality?

A true guru will travel with their disciple on the path to enlightenment and does not command, but merely jostles us on the track. In the end, we achieve the purpose on our own. The relationship between a guru and his disciple can only be of imparting knowledge and encouragement and sometimes a push toward the goal.

A guru will never be the “boss” of both the worlds. In today’s times, many spiritual teachers propagate their mission along with their products that give them the key to amassing wealth, but how that wealth is cycled and recycled for the greater good of humankind will show one the heart and the purity of a true guru.

The ease and confidence with which Yogi Bhajan has casually implied in this video that a woman is an object of sexual gratification and possession only demonstrates the deep-rooted mentality of a system where no matter how wrong a man is, he is always right.

Let’s not feed into this system of control and rights to a woman’s body anymore.

Lastly, women, please don’t expect magic and enlightenment from others in the name of spirituality. The magic is always within, beginning with your healing and then seeking the answers.