Did he just Tweet that?—the Dangers of Declaring Antifa a Terrorist Organization. 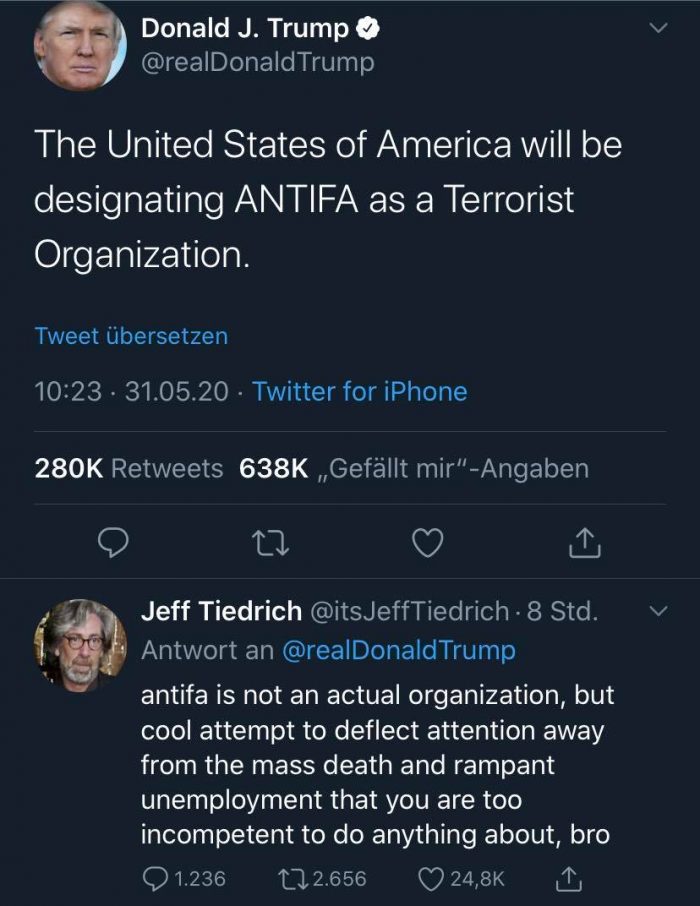 Read this: Who is Derek M. Chauvin?

And the beautifully and powerfully written: “Well. My city is burning.”

Editor’s note: This piece is in no way intended to condone violence of any kind. This is about the dangers of labeling anyone who stands up against fascism and white supremacy a “terrorist.”

Buildings and police cars are on fire, images of violence are all over the internet, and there is no end in sight.

What started in protest and outrage over the murder of George Floyd has turned into something very different.

Unemployment is on a record high, people have been on lockdown for almost three months, and the nation is more divided than ever. This is a dangerous mix.

On top of all this, Trump tweeted this morning that he will be designating “Antifa” a terrorist organisation. Let’s have a closer look at this and find out what that means.

From a European perspective, calling Antifa a terrorist organisation is troubling for several reasons:

1. It is not an organisation. There are groups all around the world with antifascist goals that see themselves as a part of the Antifascist Action (AFA). There is no “leader” of AFA, nor is there necessarily any connection between groups who identify as Antifa. There are no official memberships, and therefore it cannot define who is part of “Antifa.”

3. Protest movements and culture in the United States. Civil rights movements have always been connected to the idea of antifascism. Trump’s declaration would also mean that bands like Green Day, Rage Against the Machine—and basically any punk rock band that speaks against fascism and white supremacy—are terrorist groups.

4. International implications. Because it is not an organisation, there is not one “Antifa.” Every country has different movements within the movement—many with differing opinions about how to protest. Some condemn violence and others don’t. While all these groups oppose fascism, they often adhere to different goals and ideas.

Holding all members of antifascist movements accountable for the actions of single independent groups is dangerous. Will the United States ban thousands of European students from entering the country because they participated in peaceful demonstrations abroad? Are my friends from university terrorists now?

5. Freedom of speech. To define the antifascist movement as a singular terrorist organisation means that sharing a post from a group associated with any “Antifa” group on social media becomes an “act of supporting terrorism.” Many of us have been sharing content during the last week that might qualify as terrorism under that view. Where does speaking up for civil rights end and terrorism begin?

We don’t know who exactly is setting cities on fire, but I am afraid that there is not one answer to this question. Given the socio-economic situation at the moment, there are many people carrying a lot of frustration. My guess is that it is a mix of all kinds of anarchist groups and “first time rioters” from all sides who are responsible for the horrible scenes we are seeing on TV and social media.

I don’t deny that there are kids calling themselves “Antifa” rioting at this moment, but there are also white supremacist groups, anarchists, and other groups using this situation to spread chaos.

The Boogaloo Movement seems to be the most dangerous group amongst them. They are heavily armed, well organised, and more than willing to incite violence. Boogaloo groups may have adapted strategies of disobedience from leftist groups, but they are opposite in ideology.

So why is the president focussing on leftist kids instead of organised right wing militia? Why is he asking for a “MAGA night” on Twitter? Why is he overseeing the real danger?

Please do not feed into the “I condemn violence on all sides” narrative. I hate violence and oppose it as a means of political expression, but it makes a difference to me if someone is trying to stop fascism or if someone is fighting for white power.

I also want it to be known that nothing justifies looting and I condemn senseless acts of violence. There is no “but” or attempt to explain reasons for rioting and looting—it is the wrong thing to do.

The United States helped free the country I was born in from fascism—because the European antifascists were not able to do it without external support. We will always be thankful for that and I say this as a friend of all United States citizens:

Let’s make sure that the antifascist perspective is not perceived as an act of terrorism, but a fair warning that is covered by freedom of speech.

Let’s Stop the Conspiracies & Take a Look at the Real Issue: Minneapolis. Oh, my, god. Not the moment America needs right now. I live in Minneapolis—and I’m Tired. Wake the F*ck Up, Karen—Breaking the Silence on White Privilege.
See relevant Elephant Video