Inside the Riot: Is this really a Political Crisis? 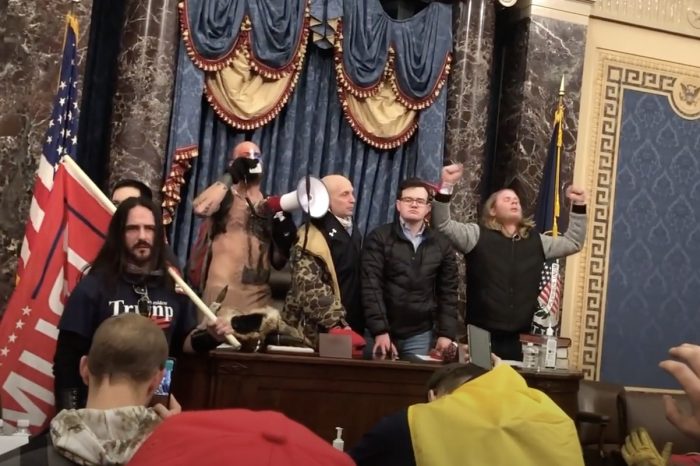 After seeing the New Yorker’s footage, I can’t stop thinking about a movie I saw years ago.

The movie I am talking about is called “Idiocracy.” The story is based on the assumption that our society is on its way to dumbing down. When I saw the movie that was released in 2006, I thought it was entertaining but seemed far too unrealistic—well, it’s 2021, and here we are.

Journalist Luke Mogelson took the risk during the recent Capitol riots and reported from within the angry mob. His footage gives us an idea about the characters involved in this shameful event.

We hear people talking, shouting, and chanting—we see the human interactions within the mob.

Seeing these domestic terrorists standing inside the Capitol posing for selfies, leaving notes for elected officials, and talking down to the one officer who urges them to stop their irresponsible behavior is just mindblowing.

This is not political activism—it looks like a crowd of little boys acting up. I do not deny that there were also women involved in the events of January 6th, but after seeing the footage, it was obvious that it were the males mainly who carried out the violence.

These boys entered the Senate Hall without thinking about legal consequences.

The lawyer of the dude with the horns claimed on CNN that the rioters acted upon Donald Trump’s request. In the video, we see individuals expressing their belief that elected officials would actually welcome their actions. We see adult men posing with confederate flags while claiming to protect the United States of America.

All the QAnon believers worried about microchips in the vaccine are up for a big surprise when they find out that their phones can be easily tracked by law enforcement.

This mob defies any kind of logic—what did they expect to happen after the riot?

All we see is a mix of lost souls from all parts of society united in their confused anger. They are raging about a steal that never happened—they got tricked into fighting a battle by their cult leader, who doesn’t even care about them.

Most of these people don’t even realize the magnitude of their actions. Some of them compare the storming of the Capitol to the Black Lives Matter protests, others see themselves in the founding fathers’ tradition, but none of them realize that they are the ones putting the country they claim to love into the biggest crisis in modern history.

This is the saddest part of these shameful events: the people involved don’t even understand what they did. They are not able to put their behavior into context. There is no self-awareness.

We can only look forward and try to heal from this crisis, but we have to talk about what caused it in the first place.

After seeing the footage from inside the riots, I think we need to change our perspective.

These folks are not temporarily out of their minds. The dude with the horns, the guy sitting at Pelosi’s desk, the man with the confederate flag—I think they are sick and need help.

They lost connection with reality—it might be caused by factors like drug abuse, social isolation, hopelessness, and personal failure, but it is definitely not about politics.

There is no point in arguing with them whether Biden or Trump would be a better President (as many of us found out online in the last months)—these people need help.

And even more important: we need to make sure to help people around us to escape the rabbit holes of conspiracies and blind aggression. Among the rioters were teachers, veterans, firefighters, entrepreneurs, and all sorts of other average folks—can we be sure to not know anyone who was there or who sympathizes with the mob?

When I close my eyes and listen to the dude with the horns casually walking into the Senate, I hear the voices of all the conspiracy loving yoga teachers I met in my life. When I open my eyes and look at that dude, I see a guy who looks like Beef Supreme from “Idiocracy”—maybe we all need to watch this movie. Not for entertainment—but as a warning.

This is not a political crisis; this is a crisis of mental health and education.