This is my Regretful & Loving Goodbye to our Toxic Relationship.

A tale of mental tangle.

I went to see him after two years of silence.

I’d heard he was moving out of state from a mutual friend and I presumed the voicemail I ignored this morning would confirm it.

The last time we spoke was an eternity ago, and yet feels like yesterday. I paused before acting, took a hike, and checked on his timeline from others to see if he already left, and then there was nothing to do. Without receiving any more details, I decided to detour down his street on my way home, only to be disappointed—I found no evidence of his presence.

But as I turned the corner, I noticed a familiar bed frame in a tightly packed bed of an old, beat-up pickup, parked in an unfamiliar driveway. I parked in front of it and plopped myself down on the steps, facing the sidewalk, my face to the sun. I sifted through racing thoughts and rapid heartbeats for an inkling of what to do. 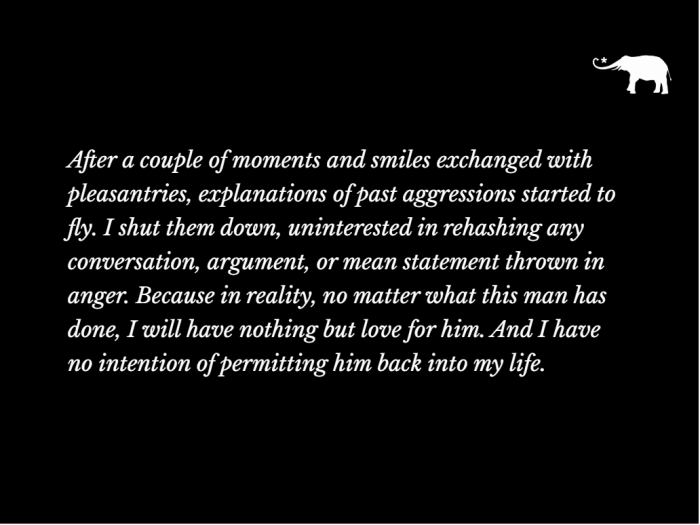 It’s his stuff, for sure, I thought. He’s got to be around here—but what would I even say?

Then the wheezing of overexertion behind me caught my ear. I turned to see the cheerful struggle of an old, dear friend of his. He didn’t recognize me—it had been forever—but from behind a large, rectangle top of a dining table he had just carried down three flights of stairs, he shot me a warm smile and a friendly hello nonetheless.

When I used his name as I said hi back, he looked perplexed, until I gave him my name. Then, he giggled when I stated he was too old to still be doing this kind of sh*t for our friend.

“Boy, ain’t that the truth!” he affirmed.

He told me to go on up, that his buddy was upstairs finishing preparation for his departure. So, I took three broad, slow breaths and journeyed up to find him standing there, shuffling through some crap at the counter, skinny as ever.

When he looked up and locked eyes with me, I saw a blip of relief wash over his tall frame, his jeans barely slung on his withered waist. Then, in the next moment, as he took a fast, short breath, his broken heart palpitating, his hands trembling, he stepped toward my outstretched arm inviting him in for a hug.

I couldn’t let him leave without saying goodbye.

After a couple of moments and smiles exchanged with pleasantries, explanations of past aggressions started to fly. I shut them down, uninterested in rehashing any conversation, argument, or mean statement thrown in anger.

Because in reality, no matter what this man has done, I will have nothing but love for him. And I have no intention of permitting him back into my life.

I picked up a photo from the counter that had been on his fridge—my dog, Josie, in her shearling coat, cute as ever. I welled up, missing her fiercely still, after all these months. He fought back tears, too, telling me of his sadness and disbelief at my decision not to allow him the opportunity to say his goodbye when she died. But I knew, even as I had grappled with that decision, it would never have been just his sweet send-off to her. It would have been seen as a new beginning with me.

I stayed longer than I should have, and he incessantly offered to, later, drive three hours just to help me move into a new place (that I don’t even have yet) so he could see me again. It was a light bulb moment—he will always seek a way to insert himself, somehow.

It’s heartbreaking because it is also evidence of his genuine kindness, his huge, generous heart. He doesn’t see that it is overbearing and inappropriate; he simply can’t accept no for the complete sentence that it is.

The exchange of him trying to help and me denying him the opportunity was ridiculous, even after pointing out the fact that either of us moving without hired help at our age is, well, even more farcical.

It didn’t matter to him, and the truth was glaringly obvious: we can honestly not be friends.

Our relationship was toxic! And in the spring of 2020, after doing what most people did during early quarantine, I evaluated everything in my life and decided I had to cut all ties. I almost felt lucky how lockdown gave me the mask I needed to supplement my courage. Even though he was my best friend, and there will always be love between us, I know he will always fight for more than a friendship.

I will miss being by his side and held close on his lap, my hand held in his, fingers fondling, folding over each other. I will miss being counted as his plus-one to all he attended, invited or not—he wanted me to be there, and I was always happy to witness him be the life of the party.

I will cherish every good time we’ve had, not letting even one be tarnished by the devastating blows of the lows.

I hold hope a casual friendship could manifest one day, but experience tells me differently—ones of battling boundaries and lessons in self-respect.

I learned a lot about love from him.

He taught me to be kind to myself and showed me my worth, yet he continually fell short, incapable of giving me what I deserved.

Through our many years, I found healthy boundaries, more love for myself, appreciation for life as a precious gift, and the strength to speak up for what I believe is right. In the challenge to hold him accountable, not enable him, I did my best to get him to understand how deserving he is of love, something he won’t comprehend until he can love himself.

I wish him the best on his fresh start. I think the crisp mountain air will do him some good.

Those couple of hugs yesterday were much needed and wonderful, even though damp, being pressed up against his sweat-soaked shirt, my cheek wet from beads of sweat off his brow—I didn’t want to let go.

After all these years, I can accept and love him for exactly who he is, a beautiful soul lost in childhood tragedy.

He called me his angel, for I had saved his life once. I will continue to cheer him on through the ether of space and time and pray he figures out how to save himself.

More words for your broken heart: 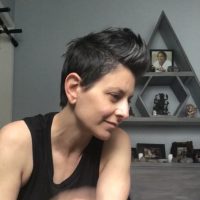 Megan Zwerlein understands the power of self-inquiry and has learned from the beginning of this incarnation she would have to fight to survive. A devout spiritual warrior at … Read full bio