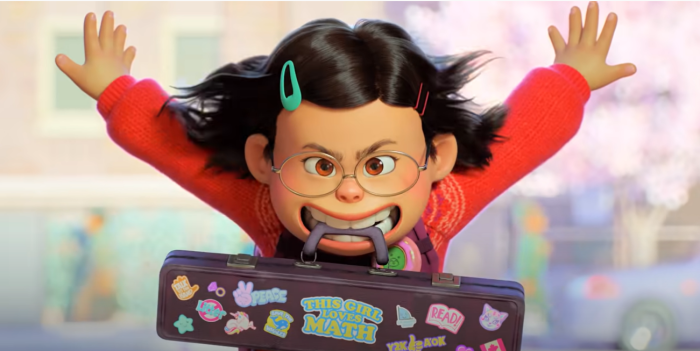 One of the joys of being a grandmother is getting to watch movies on Disney+ with my toddler grandson.

Together we have (multiple times) watched “Encanto,” the various “Toy Story” movies, and our latest binge “Turning Red.” It features a Chinese Canadian girl named Meilin Lee, Mei Mei for short, and the developmental transformation she goes through when she reaches that magical age of 13.

She is an only child, living with her parents, Ming and Jin, in a Buddhist Temple into which tourists enter to learn about their traditions. She is expected to be a straight A student, excel at all of her endeavors, help clean and manage the Temple, and above all else, be an obedient daughter to her devoted parents.

Ming is so well-versed in that dynamic of the expectation of perfection that even as an adult, she trembles at the prospect of letting her own mother down. What Mei would rather be doing is hanging out with her posse, which includes Miriam, Abby, and Priya, doing all sorts of typical teen stuff such as singing and dancing along to the music of their favorite boy band called 4*Town and fantasizing about her crush, a 17-year-old clerk at the local convenience store in the neighborhood, and sketching images of those characters.

The catchy and, yes, danceable song was written by Billie Eilish and her brother Finneas O’Connell. My grandson, Dean, offers his own shakin’ it version as he sings the Oh Oh Oh parts. Whenever he wants to watch the movie for the gazillionth time, he points to the television and calls out Mei Mei.

We always oblige him.

When her mother finds her drawings, she humiliates Mei by confronting the oblivious clerk in front of the neighborhood kids and then drags her home and tells her that she disapproves of her interests. Mei has fitful dreams that portend what is going to happen next. Everything changes in an instant as Mei wakes up the next morning feeling not quite like herself.

Her emotions have gotten the better of her, and when she looks in the bathroom mirror, she discovers that she has transformed into a massive, furry, red panda. It is part of her family legacy and something that happens to the women in her family when they come of age, dating back centuries. Her mother is alarmed and wants Mei to rid herself of the inner menace since she has firsthand experience of how much damage the red panda alter ego can do.

I won’t spoil it for you by telling you the rest of the story, but I will share some takeaway lessons from it:

1. We are allowed to be fully human, even if we harbor an inner animal.

2. Emotions are natural, and by expressing them, we can get closer to people.

3. Puberty can be messy, uncomfortable, and awkward.

4. Seeking parental approval can be crippling, and challenging authority can be healthy at times.

5. Friends are family of choice who love you unconditionally.

6. Dreams can come true if you put your heart and soul into achieving them.

7. Being creative and using ingenuity can pay off.

8. It is possible to overcome multigenerational expectations.

9. What might have been seen as a curse can be viewed as a blessing.

11. Normalizing the menstrual cycle is beneficial to teens.

And yet, to be expected, there are parents who object to that last one being part of a Disney movie, but I bet that they are cool with princes kissing sleeping/comatose women, a bride being chosen by a shoe-wielding bachelor, a poison apple being proffered by a jealous and evil old woman, and a mermaid giving up her voice and a body part to become human.

Fortunately, my mother had told me about what to expect when I was 10, so I was sort of prepared. She had handed me a book written by the Modess company, which made sanitary napkins and asked me to read it and come back to her with questions.

Before we had “the talk,” I knew that my period had something to do with blood and that my breasts were going to grow. Yikes! Were my breasts going to bleed? As I paged through the book, I was relieved…nothing about breasts bleeding. Whew!

On the auspicious occasion, my mother, sister, and I were having dinner at a local pizza parlor, and I let my mom know that we had to leave right away. She got a smile on her face. We had the pizza boxed up to go, and when I got home, I attached a napkin to the belt with clips on it.

Keep in mind that this was in the 1970s before the time of pads with adhesive strips or wings to attach to underwear. They were bulky, and I felt like I was wearing a diaper. I was lucky. I rarely had cramps, and when I did, my mother told me to exercise and stretch to make them go away. It worked. I didn’t curl up in a ball with a heating pad on very often over the next 40 some years. At 63, I am in full-blown menopause, but I can recall the way Mei felt in the film. I didn’t recognize my body and the feelings that arose.

Some of the women in my life had this to share:

“I was told to carefully wrap the used pads and never talk about my periods or let a man see my hygiene products. Take a pain medicine for pain and show up with a smile.”

“I got my first period when I was nine years old. I was at the beach with a friend and her mother. I had no clue what was going on and this woman had no desire to inform me. Just got me sanitary napkin and told me to “put it on.” She brought me home and whispered to my mother who hadn’t prepared me because she thought I was still too young. My mom told me it was ‘my friend’ and to always mention it that way. We had a different way with our girls (and grandgirls). We had a little party, and Lew bought them flowers to celebrate.”

“Couldn’t talk about them then (age 16: told it was nasty to even mention); can’t talk about them now (age 57 and post-menopausal). The whole topic still makes me squirm. It is what it is and too late to fix. I didn’t say that that is normal or okay, just factual info, so please skip personally attacking me here in the comments over it, thanks.”